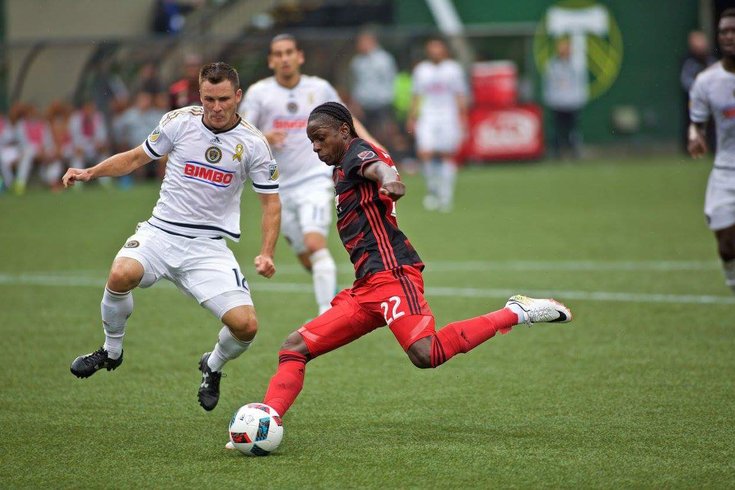 The Union lost 2-1 in Portland on Saturday afternoon, finishing with one win, three draws, and six losses to Western Conference teams in 2016.

The bad news, obviously, was the Union's 2 to 1 loss in Portland, a frenetic affair with some sloppy defending and a bogus red card for Josh Yaro, who will miss next week's game in Toronto.

The good news is that chasers Orlando and Montreal both looked god-awful in blowout home losses, keeping the Union's three-point, fourth-place cushion intact.

For the umpteenth time this season, the Union really didn't look that bad on the road. Jim Curtin's club made 15 attempts on goal and put eight of those on frame. Philadelphia matched the defending champions in possession, passing, tackling and most statistical categories.

The difference was a pair of defensive breakdowns in wide areas, both of which lead to Portland goals.

"We made a couple of mistakes, they made a couple of mistakes, and we got punished for ours," said Curtin. "(Fanendo) Adi and (Diego) Valeri were a handful and they made us pay. It was disappointing after a good first half to start the second slowly. Fabinho falls asleep on one side, then Keegan on the other, and again, good teams will punish you. We'll learn from it. We have a lot of young players on the field that are going through real games for the first time, and the only way to learn is to go through them."

46' - BOOOOOM!! A GOAL JUST LIKE THAT! MATTOCKS STEALS, SLIPS TO VALERI WHO NAILS IT HOME! TIMBERS LEAD 1-0! #RCTID pic.twitter.com/UDfKDnlp9o

Fabinho looked hesitant to close down right back Alvas Powell, who tallied three key passes in the attacking third.

Keegan Rosenberry had a hell of a time with Darren Mattocks, who assisted on both goals. The Union rookie hasn't had that type of game since the season opener in Dallas, his very first professional game which brought a matchup against Fabian Castillo. He's held up against the likes of Ignacio Piatti and Ethan Finlay, so we've seen him perform well against some of the league's better wide players.

If you've played the game at any level, you know that wet turf is the worst combination of surface and conditions. Defending in those conditions in wide situations is always going to be difficult, and that certainly seemed to affect both fullbacks.

But both teams are playing on the same field.

"Overall, I think we got punished in the wide areas," Curtin said. "I thought Powell got forward a bunch. We didn't do a good job of closing him down. Obviously, Mattocks was a handful, too, with his speed. There were some good moments from Keegan where he stepped in and closed on the ball to break up plays. But there were a few where he was very reactive and not proactive with Darren. Darren had a good day, for sure. Again, some of it was mistakes made by us, but he's a guy who closes on the ball quicker than maybe any guy that Keegan has seen. Darren is as fast as any human. He can run. So, again, the time that he closes you down is quicker. You don't have time to pick your head up and play a ball. You saw that Darren blocked a few and turned us over in some bad spots. But again, Keegan has had a great year. He's a heck of a defender and a rookie that's learning each and every day how to get better."

Josh Yaro picked up a second yellow in the final ten minutes of the game, earning a sending-off and one-game suspension. That means Ken Tribbett, who was yanked at halftime in the last game between Toronto and Philadelphia, will likely start in next week's trip to Ontario.

This is the play that earned Yaro his first yellow.

Yaro gets a yellow card. pic.twitter.com/nkONxoFMAU

"It's disappointing that Josh gets sent off. If you watch the first yellow card, it's a mistake," Curtin said. "Again, people make mistakes, I understand that and I can live with that. But (what) I can't live with, is when you're told that it's a hundred-percent a good call and that it's a yellow card. These things add up, and it cost Josh at the end of the game when he gets a second yellow."

Here's a closer look at the play, courtesy of Adam Cann at the Philly Soccer Page. If there was contact, it was slight. Maybe Yaro's knee did touch Diego Chara, but the real-time speed of the play makes the sequence look deceiving.

How the West was lost

The Union were wretched against the Western Conference this season, finishing with one win, three draws, and six losses.

Philly snagged just six out of 30 possible points against the likes of Colorado, Houston, and Seattle. The only win was a home victory against Sporting Kansas City. The Union lost at home to Real Salt Lake and Vancouver and dropped points late against 10-man San Jose.

@Kevin_Kinkead Another disappointing result vs. a western conference team. Is there just a difference in quality? pic.twitter.com/qvF7jBPNa5

There's certainly a gulf in quality between the conferences. Dallas is the favorite for the Supporter's Shield and Colorado has the league's best defense. The cross-conference records speak for themselves. If Toronto was placed in the west, Sebastian Giovinco and company would be sitting in fourth place right now.

For the Union, it's a good thing that these final four games are all against Eastern Conference clubs.