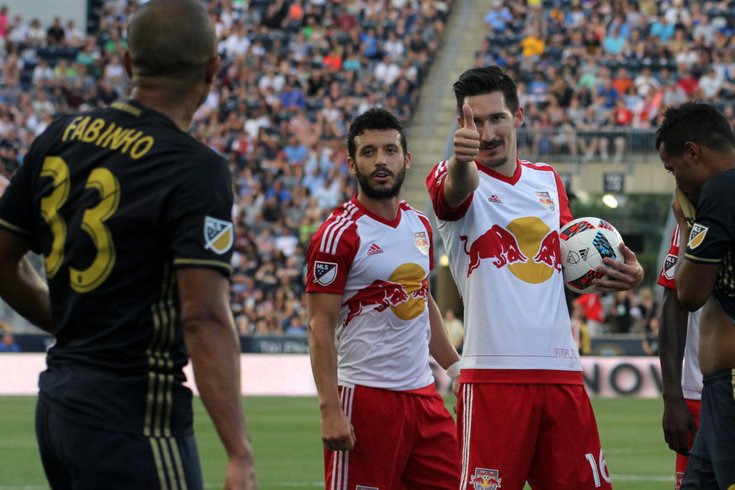 The Union and Red Bulls meet for the third time this season on Saturday night.

In both games between the Union and Red Bulls this season, the story has been exactly the same.

New York comes out on the front foot, presses Philadelphia into oblivion, takes the early lead, and then completely falls apart in the second half.

The patterns are easy to identify. Red Bull has had a lot of trouble closing out games in 2016, despite outplaying their opponents for the better part of 60, 70, or even 80 minutes. In the summer, the Union were able to adjust, break New York pressure, and earn a 2-2 home draw and 2-1 home win, the former in regular season play and the latter in the U.S. Open Cup round of 16.

These teams still play each other two more times, and could theoretically even meet for a fifth time in the playoffs, but let's not jinx it.

Does Marsch come out with the same game plan that made the Union uncomfortable in their own building? Or does he ease the pressure and pace his team for 90 minutes of sustainability?

Conversely, how does Curtin prepare his team for the harrying and harassment that resulted in early home deficits?

Does either coach budge?

"It’s a good point and, again, you just get the scouting report," Curtin said at his midweek press conference. "Tons of data goes into it and it shows what we already know, which is that the first 30 minutes of games they do their damage. They kill teams in the first 30 minutes of games. So, I expect Jesse will play the same way, especially in his home building. We’ll be prepared for it. We’ll have to weather that first 30 minutes because that’s when they make teams uncomfortable. They turn you over in bad spots close to your own goal, so we’ll have to be smart about how we build out of the back. When does it make sense to be direct and play in their end and use their aggressiveness against them?"

The general consensus around the league is that New York has the best press in Major League Soccer.

They attack with numbers and they force turnovers in extremely dangerous spots, which you can see in this clip from the second game, where Ken Tribbett dribbles into a trap.

GOAL! Sacha Kljestan puts New York Red Bulls ahead 1-0 after a key mistake in the back from the Union #PHIvNY https://t.co/MRtnQYFmcJ

You see how easy it was to win the ball and outlet to Sacha Kljestan for an easy tap in.

New York tends to swarm center backs and defensive midfielders, with wide players funneling opponents into uncomfortable areas. That's exactly what happened on that play in July when Tribbett carried the ball to the left side and became trapped.

Here's a screen grab that shows Red Bull positioning on the play: 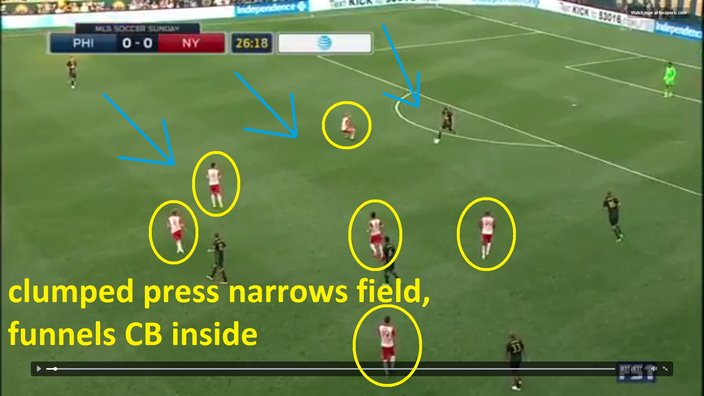 You can see how Red Bull has six players pushed way up into the attacking third. With Mike Grella attacking Tribbett at an angle, he's basically funneling the center back to his left and into a triangle of three other players. Notice how wide open Keegan Rosenberry is on the far side of the field.


Here's an example of how Philly adjusted in the U.S. Open Cup game.

There are two points of emphasis in that clip.

The first is right around 47:27, when Chris Pontius comes inside and finds himself bracketed by five Red Bulls. He hits a little outside-of-the-foot ball to Josh Yaro, and doesn't exactly find the target, but breaks pressure and moves the pressing clump sideways. That forces those five players to adjust and move to the next target.

That's illustrated in this photo: 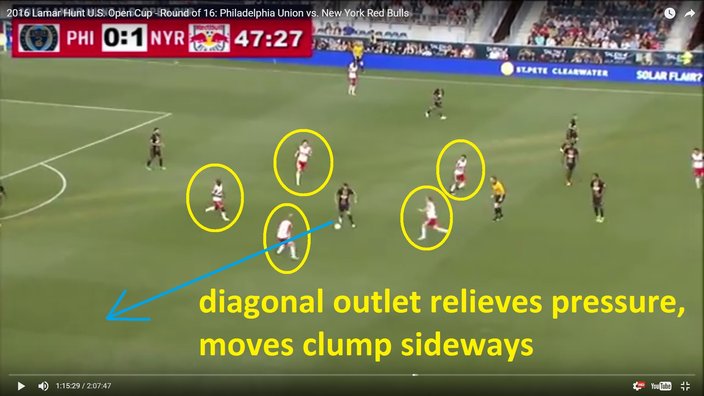 The second point also involves Pontius. When he gets the ball back a short time later, you can see that Mike Grella and Bradley Wright-Phillips are further up the field. Still, Pontius has three guys in his vicinity, but he knows that the far side of the field has to be empty.


It's just like basketball, right? If you're double-teamed, that means that somebody else is open.

In this case, he hits a beautiful "blind switch" to the opposite fullback, and Fabinho is able to attack the vacated channel: 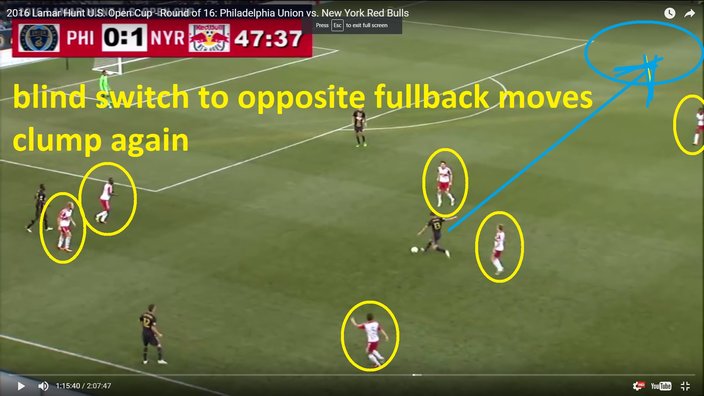 That's savvy, veteran stuff from Pontius, who has three goals in two games against New York this season.


Red Bull, to their credit, hasn't really strayed from their game plan this season. Say what you will about them blowing late leads; they haven't lost since July third. This is a team that could wind up as the top seed in the east and still has an outside shot at the Supporter's Shield.

"I think they're going to definitely try to play their game," said center back Richie Marquez. "They're a high pressing team and they're going to bring that early on. They sustain it for ninety minutes. I think it's us looking back at the film and seeing how we did, what we did well, what we did wrong, executing the parts that we did do well. I think it's going to be a high-paced game and we're just going to have to do our best to slow it down and control it. (It's) on us to come out, put pressure on them, and do what we do best. I think we started a little slow in the first half, the last game (against them). But if we come out of the gates and pressure them from the first minute to the last, then it's going to be a difficult game for them to control."

Even though the Union have come back twice against Red Bull this season, Curtin doesn't believe that gives his club a psychological advantage.

"They’re a great team. They haven’t lost a game since early July, so they’re doing just fine," Curtin explained. "Again, those games were earlier in the year. (It was the) Open Cup, and obviously the one in our building, which seems like forever ago. I think we’re different teams right now. A lot’s getting said about them losing late leads, but I think it needs to be said that they have leads all the time. In order to give up goals late you have to be ahead. And I think they’ve played from positions ahead a bunch. I know a lot of teams in MLS would like to trade places with them right now, in terms of where they’re at in the standings. I think Jesse has done a great job. Obviously, a former teammate for a long time, a guy I respect a great deal. And again, he’s navigated a very difficult start, he’s navigated a lot of injuries, and I’ll say it: As an outsider, he’s done a better job this year than last. And last year he was coach of the year."