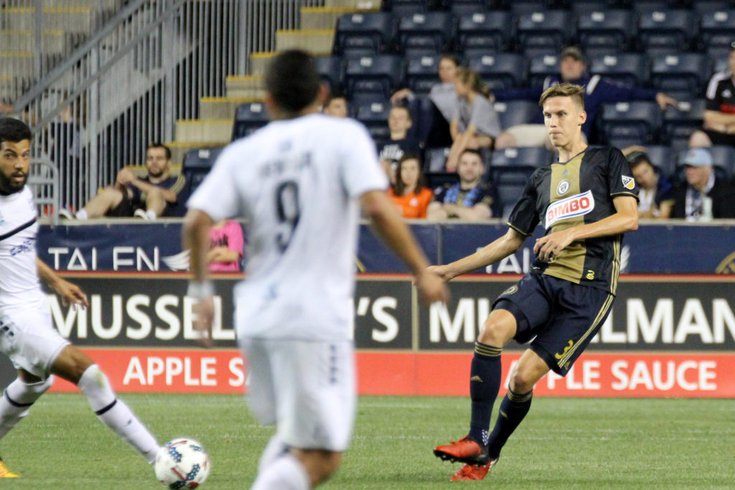 The Union have six clean sheets in the 13 games started by rookie center back Jack Elliott.

When Montreal and Real Salt Lake passed in the third round of the 2017 MLS SuperDraft, the Union kept looking for that late-round gem.

They found it with the 77th overall pick, a 6'5" center back and defensive midfielder from West Virginia University that no one had really heard of.

Jack Elliott was the last of the five Union draft picks to sign a professional contract, but he inked his deal with the senior team and not Bethlehem Steel, where we all thought the 21-year-old London native might start his professional career.

That wasn't the case, and Elliott quickly found himself higher up the depth chart than anyone had imagined, jumping Ken Tribbett as fourth in line with Oguchi Onyewu already stepping in for the injured Josh Yaro.

If a starter went down, Elliott was the next man up, and that's exactly what happened on April 1st when Richie Marquez came out at halftime in the 2-1 loss at D.C. United.

Elliott went back to the bench for one game only, then got a chance to start on April 14th and hasn't relinquished his position since, playing 13 straight games since claiming the RCB job.

The Union now have six wins, four losses, and three draws in Elliott's 13 starts, conceding 12 goals and scoring 20 for a +8 goal differential. He's contributed to six clean sheets and hasn't been carded in nine straight games, forming an unlikely but incredibly successful partnership with a 35-year-old veteran.

Elliott's performances have clearly eclipsed the top five SuperDraft selections, most of whom have barely even seen the field:

Outside of Danladi, most of the top five draft picks haven't even played this year. A couple of defenders, Josh Smith and Jake Nerwinski, have only played half as many minutes as Elliott. The rest of the SuperDraft list is comprised of stragglers and/or USL loanees, some, admittedly, who have a harder task of breaking into better starting lineups.

The pick of the first round was Julian Gressel, Atlanta's rookie midfielder who became a day one starter and a significant contributor to a talented team with tons of firepower.

Playing mostly as a number eight, Gressel already has 19 appearances, 15 starts, three goals, and six assists in 1,196 total minutes. Those are good numbers for a first-year striker, let alone a midfielder who is playing behind the best front four in Major League Soccer.

Elliott is handicapped in any comparison with Gressel, since goals and assists are easier to quantify and promote than any sort of defensive statistics we can compile. It's the same thing Keegan Rosenberry ran into last year with Jordan Morris, a guy who scored goals and did flashy things that provided better optics for the casual observer. Elliott doesn't do anything to "wow" the type of fan that blindly votes for Tim Howard in the All-Star Game popularity contest.

But Elliott does have a few measurables that stack up.

He's top ten in MLS in two defensive categories – clearances (5.4) and blocks per game (0.9). In both columns he's the top-ranked rookie, clearly outpacing other first-year center halves. Elliott also scores high in fouls per game conceded (just 0.6) and is completing 79.4 percent of his passes. That number is slightly below Oguchi Onyewu but higher than incumbent starter Richie Marquez.

For context, Matt Hedges and Ike Opara have a pass completion percentage in the eighties. The disparity I think has something to do with Elliott's ability and tendency to try that long diagonal or field-switching ball.

There's a higher risk/reward when it comes to playing this type of pass:

For what it's worth - and this probably says a lot about the current state youth development– most of Elliott and Gressel's competition is coming not from fellow draft picks, but from homegrown signings.

Most of the major first-year contributors this season have local roots, like Ian Harkes, Brooks Lennon, Nick Lima, Alex Crognale, and Marco Farfan.

Crognale is a good place to start since he's another 6'5", rookie center back. He's putting in 5.3 clearances per game and 0.5 blocks per game while conceding more fouls. He's also intercepting and tackling at a 60 percent rate compared to Elliott. Crognale has played 718 minutes this season, coming in and out of a Columbus lineup that has been inconsistent and certainly not as defensively sound as the Union's system.

It's fair to consider that Elliott's play could be influenced by the more conservative shape and strategy that Jim Curtin deploys. This isn't like plugging a quarterback into Texas Tech's "air raid" offense, but the idea of being a "system" player can certainly apply to soccer.

Lima and Farfan are both fullbacks, with the former playing as a regular starter and the latter getting early minutes this season as a backup. Lima has been excellent so far in 2017, playing more than 1,200 minutes and bombing the San Jose flanks like an experienced veteran. His defensive numbers are comparable to those of Brandon Vincent, though he isn't putting in crosses and key passes at the same rate. He's a guy to keep an eye on this year, especially if you can stay up to watch those late west coast games on MLS Live.

Elsewhere in the homegrown ranks, you've got D.C. United's Ian Harkes, who plays a similar position as Gressel on a worse team. Gressel's goal and assist numbers are better and he's putting in more key passes per game. Harkes is playing more total passes at a much higher completion percentage. Harkes looks to have the slight edge in defensive stats, but not by much. Harkes is more of a ball mover while Gressel has more of a penchant to get forward.

It's hard to judge Gressel and Harkes side by side when one plays for a dangerous, fun, attacking team and the other plays for a dull, boring, bottom feeder.

Julian Gressel gets @ATLUTD on the board

Then there's Brooks Lennon, the United States youth international and Liverpool loanee who plays for Real Salt Lake. One goal and one assist in 1,009 minutes isn't lighting the world on fire, but he also plays on a poor team. Lennon's biggest issue is that he just isn't getting looks on goal. He's got 10 shots in 12 games and just two in his last four. He needs a strong back-half of the season to put himself in ROTY contention.

Equally promising is Montreal's Ballou Jean-Yves Tabla, a forward with some early flashes of skill who is now back on the bench after four straight starts in April and May. He's currently stuck on two goals at 768 minutes.

That's about it, as far as rookie contributions at the midway point of the season.

If I'm listing them right now, it goes something like this:

Elliott and Lima are a bit down the ladder right now, stuck behind a guy who is scoring goals and adding assists on a more exciting team with more interested fans and more national attention. People aren't watching Philly and San Jose as often, or with as much attention, as they watch expansion Atlanta, a team that features a bunch of expensive and intriguing attackers.

If either player is going to dethrone Gressel for ROTY, they'll need to continue their strong performances while hoping the Atlanta midfielder concurrently plateaus.