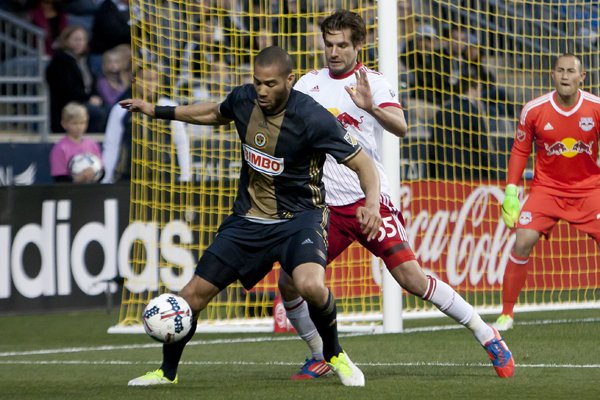 The Philadelphia Union have conceded just six goals in nine games since 35-year-old Oguchi Onyewu returned to the starting lineup.

Ninety minutes after taking a soccer ball to the neck from a flailing, point-blank scissor kick, Oguchi Onyewu was joking in the Union locker room, enjoying another clean sheet.

Onyewu was credited with a block on the play, one of two to go along with four interceptions, five clearances, and six recoveries in the 3-0 victory.

The Union have six wins, six losses, and two draws in Onyewu's 14 MLS starts. That goes back to the beginning of the year when the club went eight games without a win to start the campaign.

He came out of the lineup briefly in April, then re-emerged as a partner for upstart rookie Jack Elliott, anchoring a defense that has given up just six goals in nine games since May 6th.

The Union are 6-3-0 in his return to the starting lineup.

"Honestly, people kind of acted like they don't know who I am or the player I was," Onyewu told reporters Sunday. "They're acting surprised when they see the performances I'm giving this season. I know what I'm capable of. Fortunately for me, the Union knew what I was capable of and I've been proving that right now. The Onyewu that you guys said was in the past is obviously in the present as well. To the critics, I'm just doing my job that I've always been doing for the last 16 years."

Jack Elliott & Oguchi Onyewu have been on the field together for 731 MLS minutes. They've allowed 4 goals.

That chip on the shoulder has been a motivator for Onyewu since the season started.

Back in February, I had him pegged for six to ten starts backing up Josh Yaro and Richie Marquez while also imparting wisdom on a young group of center backs, none of whom were older than age 25.

But when Yaro underwent preseason shoulder surgery, "Gooch" was called upon to be the opening day starter.

It provided an immediate opportunity to prove those critics wrong, which Onyewu seems to identify as a mixture of media, fans, and teams that passed on him, like Scottish club Rangers and MLS side New York City FC.

"It's a combination; the Revs took a pass on me, too," Onyewu said. "I think they might be going back on that decision now. It wasn't just them, it was a few other teams and I think it had to do with my age and perhaps my past injuries. There are not a lot of players that have sustained a lengthy career like I've had, that haven't had injuries to their names. (Orlando attacker) Kaka had multiple injuries yet people rate him highly. There are a lot of players (who have gone through that) and this is a testament to who I am and to what I'm about. I don't let adversity get in the way, I push through it. I'm continuing to that with this team behind me and hopefully, we all continue to that the rest of the season."

In fairness, the skeptical outlook on Onyewu's future wasn't without merit.

Here was a 34-year-old center back who hadn't played a competitive game since February of 2015, last appearing for second-division English side Charlton Athletic. Onyewu had suffered knee and Achilles injuries. There were only two starting center backs in MLS, Victor Bernardez and Jamison Olave, who were in their mid-thirties during the 2016 season.

But that period of inactivity on the field didn't mean that Onyewu was any less of a professional off of it.

"I've always taken care of my body," he explained. "I don't think, physically, I look, act, or play as old as I am. I think it's the regimen, the training regimen, and my professionalism, and the fact that (you can be) 'old but gold.' I try to lead by example and show the younger boys that just because you hit [a] certain age doesn't mean you have to perform to that age. I try to perform to my ability and that's what I'm doing right now."

And when it comes to self-evaluation, the former U.S. international doesn't spend much time reflecting on his performances.

"That's for the critics or you guys, the journalists, to dictate right now," Onyewu explained. "My most important part of playing right now is to maintain the zeros, which we're doing, and to get good points, to get three points, to move up to get into the playoffs and ultimately to hopefully have the opportunity to raise the MLS Cup."