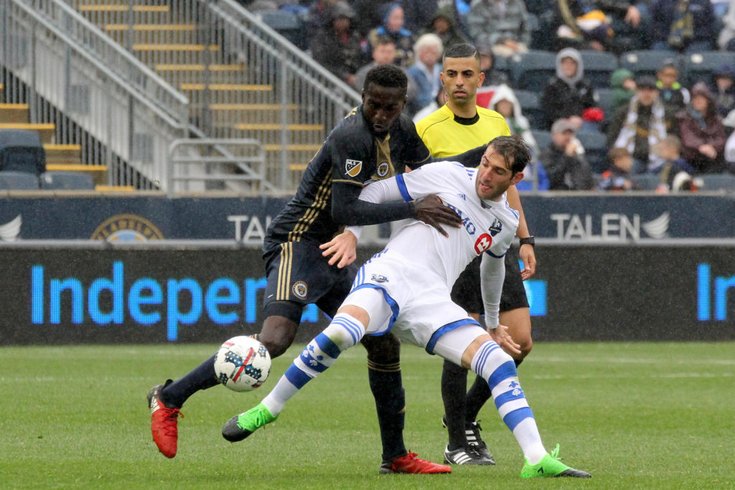 The topic came up again on Saturday night after the 1-0 win against D.C. United in a question about Alejandro Bedoya's impending Gold Cup call.

The Union are 5-1 in Bedoya's last six starts, losing the other two June games that he didn't play.

He missed the 2-1 loss in New York City while away for World Cup qualifiers. Derrick Jones was similarly unavailable through international duty, resulting in the Union turning to third-string defensive midfielder Warren Creavalle instead. Creavalle came out of the game injured, forcing center back Jack Elliott to deputize in the midfield for the final 20 minutes.

Bedoya then missed the following game due to a hamstring injury suffered on that international trip. Jones, who had just returned from the U20 World Cup, started in Bedoya's place and was sent off in the 53rd minute of the 2-0 Red Bull loss.

While it was nice to see two Philadelphia players representing two different levels of the USMNT, it didn't help the Union, who could have used their captain and starting #8 in that pair of losses.

Armchair Analyst: Alejandro Bedoya's understanding of time and space is what continues to make him valuable for club & country pic.twitter.com/TINzfmCKcE

Bedoya will again be out of commission for most of this month. Teammate Andre Blake, maybe the best player on the squad, will also be gone for Gold Cup duty starting next week.

Haris Medunjanin also received a recent call, traveling all the way to Bosnia to sit on the bench for a 2018 World Cup qualifier. He should get credit for delaying his international travel to play in the NYC game on June 3rd, before flying out to Europe.

Those are the negatives of international play, amplified in a league that does not adhere to the FIFA calendar.

The biggest positive is that the club's profile probably increases when players get those call-ups.

For instance, a young American or one playing overseas can say, "Hmm, well Bedoya plays for Philadelphia and he's getting calls, so maybe I'd like to play there, too."

It also works the other way, with a guy like Medunjanin representing the Union badge while playing alongside teammates who ply their trades at Juventus, Roma, and Hertha Berlin. If one Sarajevan teenager Googles the Philadelphia Union because of Haris' connection, then that's a small win for the "brand."

And think about soccer fans in Philadelphia who don't care about the Union (there are many). If they see Derrick Jones on TV and say, 'Oh wow, he plays here?' then that's another minor victory for the local club and exemplifies what Curtin mentioned in that first quote about growing the game in this country.

The issue is whether or not existing Union fans care about international call-ups, which we asked about on Tuesday.

"I think ultimately they do love players that play for our national team," Curtin said. "I think that's natural. I think the patriotism is in every Philadelphian from that regard, but at the end of the day they want to win soccer games. It needs to be said that Earnie and myself, number one is for the Philadelphia Union to win soccer games. So when we make comments about the importance of developing the American player, that's also with the mindset of 'win first,' for sure."

That's fair and it makes sense, especially for the Philadelphia sports fan who has witnessed one championship since 1983, or two if you count Villanova basketball.

The priority in Philadelphia is always going to be winning championships, with everything else being placed strictly on the backburner.

But the territorial nature of this city does create a sense of pride that might not exist elsewhere. That lends itself to the idea that locals really want to see "their own" do well on the international stage.

"I do think, to our region, and to the homegrown player, that Philadelphia is a little more parochial," Curtin explained. "We embrace our own, so there is something to the Derrick Jones type of story or the Auston Trusty story. Now, if they become guys that go on and play for our senior national team, that is powerful. If Christian Pulisic came back here, you could argue that our fan base might get behind him more than (any) aging superstar. I'm not sure; I don't want to speak for them but I do think there is something to the Philly mentality, the Philly mindset that is very parochial, where we love our own. So there's a confidence in the fan base to see players go from us to the national team. I think there's something there, but at the end of the day it is about winning and having success on the field."