It's still early, but upcoming game against D.C. United a must-win for Union 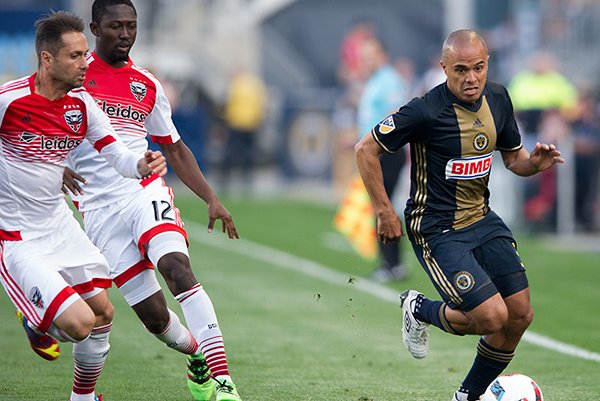 The Philadelphia Union are dead last in the Eastern Conference with 16 points and a 1.07 points-per-game average.

Saturday was supposed to be a matchup between 10th place Philadelphia and 11th place D.C., the two teams at the bottom of Major League Soccer's Eastern Conference.

But United's 2-1 win over Atlanta on Wednesday night now means that the Union will be dead last when they host Sebastien Le Toux and company in this weekend's regular season rubber match.

Jim Curtin's team is now at bottom of the conference table with 16 points and a 1.07 points-per-game average. They're 19th out of 22 clubs in the combined standings, propped up only by the equally disappointing seasons of Colorado, Real Salt Lake, and expansion Minnesota.

That's why Saturday's game is already a must-win for a struggling squad.

A home defeat would extend the Union's losing streak to four games as we near the season's halfway point. The team would have four wins, eight losses, and four draws going into a July 2nd home game against New England on national television.

A home win would see the Union leapfrog D.C., setting up a six-pointer against the Revolution that theoretically could move Philadelphia into 7th place, assuming the Revs lose or draw in Toronto this weekend as heavy underdogs. 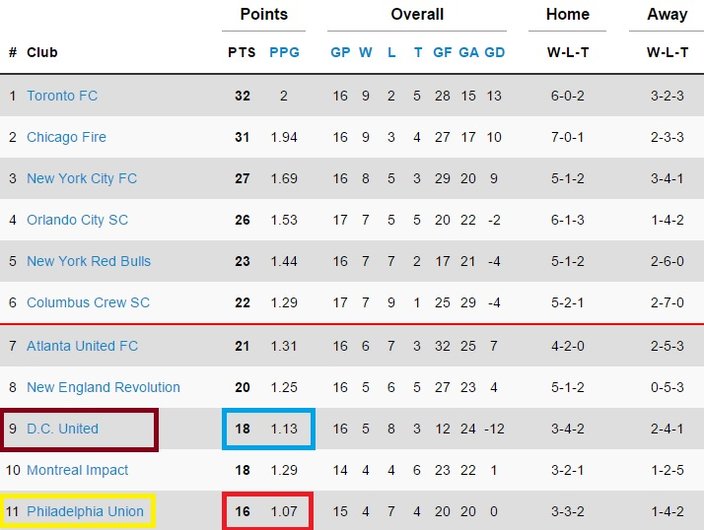 Historically, the Union have found themselves with similar records (W-L-D) and point totals at the halfway point:

*This was the expansion season that featured a 30 game schedule and eight of the first 10 games on the road. PPL Park was not yet built.

You see that the Union have only been above the .500 mark near the halfway point three times in seven seasons, or eight if you want to count the throwaway expansion year. Twice, in 2011 and 2016, did they end up in the playoffs. The 2013 squad probably should have qualified, but stumbled down the stretch and finished 12-12-10 with 46 points and a 1.35 PPG, going 5-7-6 (W/L/D) in the back-half of the campaign.

That was under head coach John Hackworth, but Curtin's teams have performed similarly in the small sample size with which we have to work.

Curtin took over for Hackworth in the summer of 2014, resulting in a bump in form that saw the Union go 7-5-6 down the stretch and challenge for the playoffs while ultimately missing the cut by seven points.

It was similar last year, when the club went through a horrific slump, going 4-10-4 to backslide into the final Eastern Conference playoff spot.

The theme here is that the Union historically drop off later in the summer and into the fall.

In three seasons, Curtin's record in September and October is six wins, 11 losses, and six draws for a PPG of 1.04. For further context, Philly was already out of the playoffs in two October wins and one October loss, which probably skews the numbers even more considering the fact that those games were essentially meaningless.

You need points now, because history shows that the rest of the league rises to the top while the Union typically plateau towards the end of August.

A loss on Saturday against D.C. leaves you about ten points out of fourth place, which is the required spot to earn a home playoff game this year. Fifth or sixth means you're probably going to New York City or Orlando for another weeknight wild card game, which doesn't favor the Union or any road team.

And finishing sixth or seventh doesn't improve upon the progress made in 2016 under year one of Earnie Stewart. What does it mean if you take a step backward in year two of a five-year plan?

The Union need points, and they need them now, or else we're in for another long summer.