Why Brandon Vincent is now having his Keegan Rosenberry moment 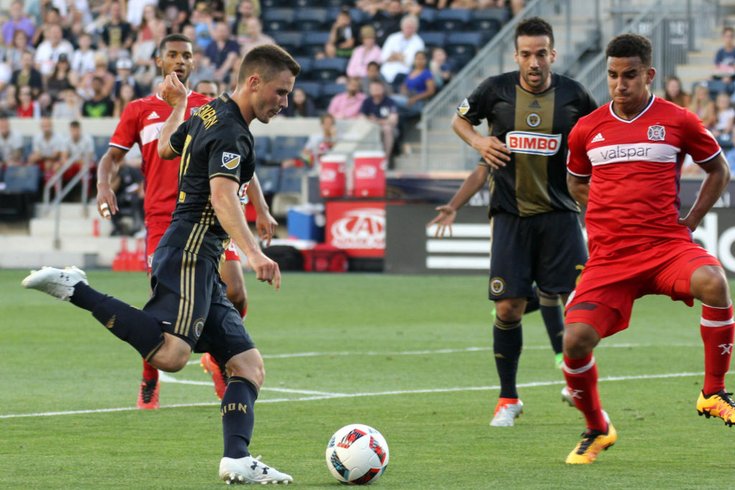 The Philadelphia Union passed on Brandon Vincent (right) to select Keegan Rosenberry with the third pick in the 2016 MLS SuperDraft.

For the record, I was one of the people who vehemently disagreed with the decision to draft Keegan Rosenberry last January.

That turned out to be a horrendous opinion, as Rosenberry played every single minute of his rookie year, earning All-Star honors and a national team call-up along the way.

But it wasn't really an anti-Rosenberry take. It was more about another opportunity that the Union technical staff decided not to pursue.

Earnie Stewart and Jim Curtin traded up to snag Josh Yaro with pick number two and had the opportunity to grab Stanford left back Brandon Vincent with the very next pick. Rosenberry, theoretically, would still be available at No. 6 overall, with Chicago lining up a loan move for fullback Rodrigo Ramos and Real Salt Lake also being set with Tony Beltran on the right side of their defense.

The Rosenberry pick felt like a reach at the time, especially with the top ranked left back still on the board.

“We didn’t believe that he was going to drop that far,” Earnie Stewart told reporters after the draft. "He was an asset for our thoughts and our plans of how we want to build our team and how we want to build our foundation for a long time to come. So, no, I don’t think that was reaching at all. Actually, we were very, very keen on getting him and we were in agreement to that position.”

Philly instead wound up with a promising young forward at pick number six, Creighton's Fabian Herbers.

Fast forward 16 months and Rosenberry is sitting on the bench while Vincent shines for Chicago.

The Fire are 9-3-4 this year with a points-per-game average of 1.94, making them statistically the second best club in Major League Soccer. Vincent has played every single minute of every single game, starting his 2017 campaign in the same exact way that Rosenberry began in 2016.

He has three assists in his last seven games while Chicago's defense has also posted four clean sheets in that same time frame.

It's certainly helped that Fire head coach Veljko Paunovic has shown more consistency with shape and tactics this season, sticking with four-man backlines and abandoning the experimentation that saw Vincent utilized as a wing back during some early 2016 matches. The 23-year old, who didn't become a regular starter until last June, has also benefited from defensive partners Joao Meira, Johan Kappelhof, and Jonathan Campbell all having a similar year of MLS experience under their belts.

Vincent, only a sophomore, has been one of the league's best left backs in 2017.

As for Rosenberry, it's hard to say how much a drop off there really has been. He certainly was not the only starter responsible for the club's 0-4-4 start. Union wingers had contributed zero goals through the first eight games. Captain Alejandro Bedoya was playing in an unfamiliar role and Curtin had to shuffle the starting eleven to start producing results. It felt like a lot of players had taken a step back.

We know that Rosenberry hasn't been as sharp going forward. His key pass numbers were down to start the season, with balls either being overcooked or underhit from the flanks. For whatever reason, that elite crossing ability has been eluding the Lancaster native, who can't find his range.

There's also the question of positioning, with the Union coaching staff pointing out that Rosenberry has been caught in two minds as to where he should be on the field.

"To my discredit, I couldn't disagree with what they were saying, being caught between attacking and defending," Rosenberry told PhillyVoice last month. "I was getting beat inside, as opposed to outside, a few too many times and it wasn't that it was resulting in goals or glaring mistakes, but when I'm not performing as well as I was last year, then it's time to take a step back and recharge the batteries a little bit. Hopefully, that's the case here and myself and the team can be better because of it."

There's also the concept of playing next to different center backs, as most players will look better with the speedy Yaro alongside them, as opposed to the likes of Oguchi Onyewu and Jack Elliott, the current starters who sit a bit deeper and require a bit more coverage from their respective fullbacks.

Keegan's replacement, Ray Gaddis, fits the mold. He's a veteran, lockdown defender who has looked good since reclaiming the starting gig he earned back in 2015. Most people forget that Gaddis took the job from Sheanon Williams, who was then shipped off to Houston.

Long known as a 1v1, 'stay at home' type of player, Gaddis has allowed very little up his side of the field and was a big part of the resurgence that saw a new-look Union rip off four straight wins in May.

That streak has given way to a three-game losing skid, which begs the question – is it time to go back to plan A? Gaddis has been very good since re-entering the lineup, and probably deserves more credit than he gets, but the immediate and long term right back plans both involve Rosenberry, who is supposed to be part of the Union's young defense core.

That's not to say that the 27-year-old Gaddis is an elder statesman, but you get the point.

Wonder if it's time to say screw it and put Wijnaldum, Rosenberry, Yaro, Marquez, and Alberg back out there

The irony, of course, is that Rosenberry could have very well been a Union homegrown player, but was denied that status despite spending time in the club's pre-academy youth setup. Keegan could have been on board from the jump, opening the door for the Union to draft all three of Yaro, Vincent, and Herbers with picks number two, three, and six.

That never happened, and the Union had to take Rosenberry in the draft while passing on Vincent.

It is rather pathetic, of course, to play the revisionist history card in claiming that Vincent was the better pick than Rosenberry. We can sit here all day talking about the Eagles taking Brandon Graham over Earl Thomas, or the Sixers preferring Jahlil Okafor to Kristaps Porzingis. It's a waste of time to go down that path.

The takeaway, if there is one, is that both players seem to have leveled off. Maybe Rosenberry's phenomenal rookie year created untenable sophomore expectations. Vincent, then, probably underachieved as a rookie and is now hitting his stride.

All of this should pan out in the end. Both players are probably are going to be long-time MLS starters on opposite sides of their respective backlines.

The ultimate shame is that the Union could have ended up with both.