Union fans shouldn't be surprised that Derrick Jones was sent off 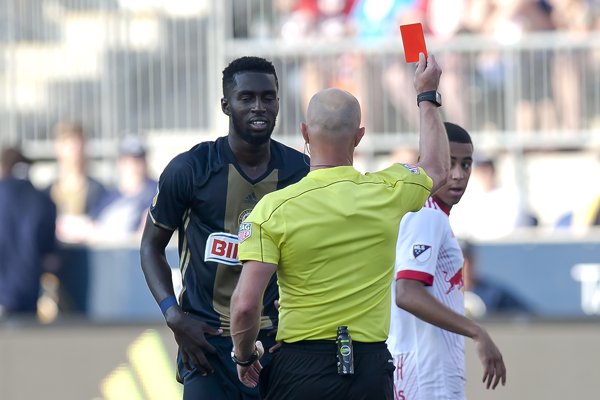 Homegrown midfielder Derrick Jones was sent off in the 53rd minute of the Union's 2-0 loss to New York Red Bulls on Sunday night.

Playing at home on national television, the Philadelphia Union stumbled to a third straight loss on Sunday night.

The turning point was a second-half Derrick Jones' red card, an ejection that forced the 10-man Union to shell up and play on the counterattack. An inspired defensive performance withered just three minutes from stoppage time, as Bradley Wright-Phillips broke through for a game-winning goal.

Jones was sent off in the 53rd minute when he missed high on a tackle, putting his leg over the ball and coming close to spiking New York midfielder Felipe Martins.

"I don’t believe it’s a red card," said head coach Jim Curtin post game. "Felipe is a guy we talked about all week in terms of a guy that can get under your skin and frustrate you and don’t fall into the fighting or anything like that. I think he maybe baited the ref a little bit, made it look a lot worse than it was, but he’s drawn five red cards this year on opponents, so not a surprise there. You would like to see the referee maybe pause, take a deep breath, think about it, and not just be so quick and excited to show the red. I think you could’ve gotten some communication maybe from the sidelines. It just happened very fast and I thought the red card was quick. You know, Derrick does tackle over the ball, but he doesn’t really touch Felipe. Again, you could get into all kinds of different arguments on the call, but obviously, red cards change games."

53' | We'll play down a man as Jonesy was shown a red for this tackle. Creavalle brought on for Ilsinho#JoinOrDie pic.twitter.com/aaVppjMZIT

Video replay makes the incident look rather innocuous, at least in my opinion.

But don't be surprised that the red card was shown because MLS referees have been making this call for the better part of two years now.

You might recall the rash of ejections that kicked off the 2016 season, mostly spurred by efforts to keep star players upright and cut down on injuries. Even with safety in mind, a large portion of coaches and players felt like the disciplinary changes resulted in overcorrection.

Through April 6th of last season, there was a five-year high in ejections, with 16 red cards through 42 games.

Ironically enough, one of the best examples of disciplinary zeal also involved New York's Felipe. This time, he was on the receiving end of the red for this standing tackle on New England's Kelyn Rowe:

There was another controversial red that took place just 24 hours later, this time with Vancouver's Matias Laba being sent off for chopping down Los Angeles' Mike Magee:

Laba, at the time, had put in 394 tackles since joining Major League Soccer in 2013.

The Union were also affected by that run of red cards. Last April, Warren Creavalle earned a straight red for this challenge on Chicago's Ravzan Cocis:

Despite what you hear in the commentary, that tackle went into the books as a red, not a second yellow.

In response to all of those ejections, not just Creavalle's, Curtin pushed back against the idea of the "studs up" tackle.

"I'll always argue that you can't slide in soccer and not have your studs show," Curtin said last spring. "It's really a gray area. But it's something that they're cracking down on, and something players and coaches will have to adjust to. I can't say I'm fully onboard. I think, when you start saying that we're going to referee differently from league to league, all over the world, then it's risky. It's an area where they're going to need to be consistent.

"To their credit, they have been consistent; they're just sending everybody off. I think for the fan though, they don't want to see games end with a team short-handed, especially the early (cards), where it's the 12th minute and teams are playing down a man for 70 or 80 minutes. It's difficult, and it's usually ugly soccer."

Curtin has been consistent with that reasoning since he took over as head coach back in 2014.

We asked him Sunday if he felt like the Jones red card was another case of misdirected scrutiny regarding exposed studs.

"Listen, I think it got written down as violent conduct instead of the studs showing," he explained. "But, again, it’s all semantics. You can’t really make a tackle in a soccer game without your studs showing, so I think that’s a poor choice of words that you always hear referees and people say, because you physically can’t slide without someone being able to see your cleats. Again, I just think it was a little bit rushed.

"I don’t think it warranted a red card; I think maybe a yellow, but again, he made a quick choice and we have to live with it. It’s a snap decision and, again, you can get into the semantics of it, but at the end of the day we had to play down a man for a long time, and against a good team that’s very difficult."