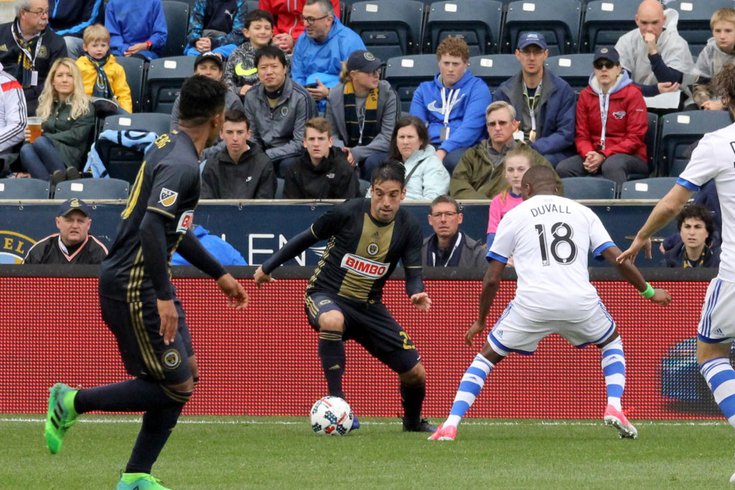 The Union's Ilsinho and Roland Alberg have combined for three goals and zero assists while playing the number ten position this season.

Two weeks ago, young defender Danny Barbir was "just training" with the Union after being released by England's West Bromwich Albion.

Four months prior, Oguchi Onyewu was "just training" with the Union during preseason exercises.

He signed one week later.

Reports out of Central America say the 25-year-old Costa Rica international is set to sign with the Union, while head coach Jim Curtin tempered expectations during his midweek press conference.

Whether or not Aguilar puts pen to paper on a contract, the takeaway here is that the Union technical staff realizes the immediate need for a bona fide playmaker in the starting XI, because the numbers this year have been Philadelphia Phillies-level awful.

Alejandro Bedoya got the first shot at the #10 this year and was pulled back to a deeper spot after he and Curtin both admitted that he wasn't in his preferred position.

Roland Alberg then got his chance before coming out of the lineup with an injury.

Ilsinho has now inherited the spot, showing some nice flashes here and there without much end product to show for it.

The Union captain played the CAM spot in games one through five.

He finished with this line:

Admittedly, we all knew that this wasn't his best spot on the field. The hope, at least in theory, was that Bedoya's defensive qualities and overall utility would allow him to play the position like Tranquillo Barnetta, using his strong motor to press defenders, turn them over, and bulldog the opposition with a volume of touches and tackles.

It never really panned out that way, with Bedoya instead seeing very little of the ball and unable to get into incisive attacking positions.

His best game was probably the Toronto FC home match, where he was active early and often, able to do things like this:

Roland played 40 ineffective minutes off the bench until getting his first start in the April 14th loss against New York City.

I thought he was okay in that game, despite others feeling like he underwhelmed.

He started the next three games before picking up an injury, putting together this overall stat line:

It's hard to believe that he only had one key pass in those four starts, especially when he was occasionally popping up with moments like this:

Wanted to highlight this pass from Roland Alberg... pinpoint deep dime into the channel. pic.twitter.com/zUTgY8aEln

That's a perfect through-ball that a guy like Fafa Picault or C.J. Sapong may have been able to reach. It won't go down in the books as a key pass, but it probably should.

Likewise, he had a couple of balls that may have ended up as secondary assists, such as this raking diagonal in the NYC game:

The issue with Alberg is that he's always played more like a second striker than an actual number ten. He was never a perfect fit for this spot, probably thriving instead in a withdrawn role where he doesn't have the defensive responsibilities required in a Curtin team.

He's been in that spot ever since, trying out a position that he's actually never played in his long and respectable career.

Here's his line as the starting CAM:

Ilsinho's key pass numbers are better than Bedoya and Alberg, and he also has the ability to move defenders with his dribbling and ball skills.

But you also see things like this, where an initial decision to drive at goal following a turnover winds up becoming a low-percentage shot with numbers in support:

If you tally up those numbers you're looking at a starting group of attacking midfielders who have contributed three goals, zero assists, 24 shots, 14 shots on goal, and 10 key passes in 1,169 minutes as starting number tens.

For comparison, here are some lines of other CAM players around Major League Soccer:

You see that even players like Alex and Rowe, who don't make seven figures and don't play on high-powered super teams, are easily outpacing the Union's crop of CAM players.

Furthermore, here's what Tranquillo Barnetta and Cristian Maidana did in the last three seasons with the Union:

It would take about an hour to tally up three years worth of key passes, so I won't bother with that, but you see the production you got from these two guys in 2014, 2015, and 2016.

Bottom line, the Union aren't getting nearly enough out of the number ten position.