Union 1, D.C. 0: Player grades and analysis for a must-win game 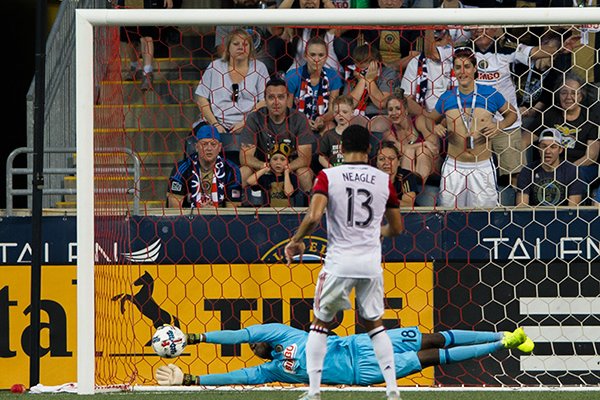 Andre Blake stretches to make one of his four saves in the Union's 1-0 win against D.C. United on Saturday night. Like the U.S., Blake's Jamaica side will not be competing in the 2018 FIFA World Cup.

It didn't seem that important at the time, but Saturday's win lifted the Philadelphia Union out of the Eastern Conference basement and pulled the team within five points of the playoff line, all while snapping a three-game losing streak in the process.

This was one of those games that you circle on the calendar, a home game against an average conference opponent that should always end with three points. With the Union's history of underperformance in September and October, you need to keep pace in June and July, especially before clubs with more money hit the transfer market for improvements.

Philly got the job done with one moment of brilliance from Fafa Picault and a couple of fantastic saves by Andre Blake, who now departs for the Gold Cup at a time when the Union could really use him.

'Tilting to the right'

Jim Curtin had an intriguing quote towards the end of his post-game press conference about the imbalance his team shows in build-up play.

It started with a question about Giliano Wijnaldum and whether or not Fabinho was injured on Saturday. Curtin claimed that Fabinho was not injured, even though the left back was spotted at Talen Energy Stadium with ice wrapped around a bloody right hand.

We'll figure that out this week, but this is the back-half of the quote:

"For whatever reason, our attack really shifts and our build-ups (are) on the right-hand side. You have a look when Fabinho’s on the ball, when Giliano is on the ball, when Oguchi (Onyewu) is on the ball at left center back and you pick your head up, because I have the same view the whole first half, there’s not a lot of options and it’s because we tilt to the right for whatever reason but we need to work on, and we talked about it at halftime, having Ilsinho come over more to the left so that there’s at least two options instead of Fafa in behind or Fafa short. We need more movement and more commitment to help on that side."

I tried to pick out a passage of play that illustrates what Curtin is talking about, and found this around the 18th minute:

It's a strange sequence. Starting with the throw on the right side, they circulate the ball back to the defense and actually do a great job of quickly switching play and attacking the left side of the field.

Problem is, there's no one over there.

You see Haris Medunjanin drop in near Jack Elliott, which is where he likes to receive the ball. Alejandro Bedoya is on the right side of the field, Wijnaldum is pushed way high up the left flank, and Ilsinho is just sort of standing near C.J. Sapong.

That leaves Onyewu with pretty much nowhere to go, and he swings it to Wijnaldum for a turnover and brief counter in the other direction. 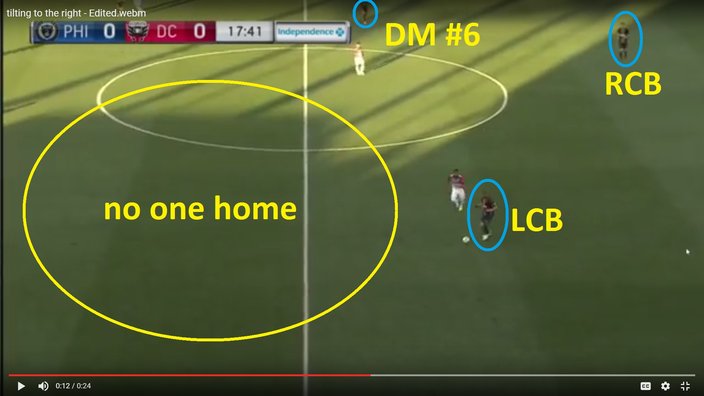 You see when Onyewu plays the ball that there's no teammate within 25 yards. There's a massive gap between the defensive and midfield line because Medunjanin has dropped on the other side of the field and Bedoya was pushed up on the right side (admittedly due to that throw-in).

But when you move play forward a bit, look at where Ilsinho is standing: 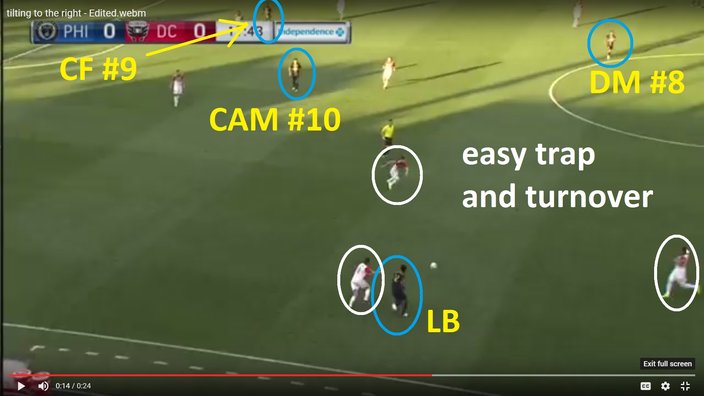 That's an easy trap and turnover for D.C., with Wijnaldum stuck in the corner and no teammates around him.

Bedoya is at least recognizing the situation and sprinting to get back into position. Ilsinho isn't even involved in the play, with acres of space for him to check to the ball and provide an option for his teammates.

Still nothing from the #10

That sequence above basically explains the frustrations with Ilsinho as he tries to play a role he isn't entirely familiar with. Still, he's been around long enough to know that you check to space and demand the ball. This isn't his first rodeo.

Here's his chart from the game: 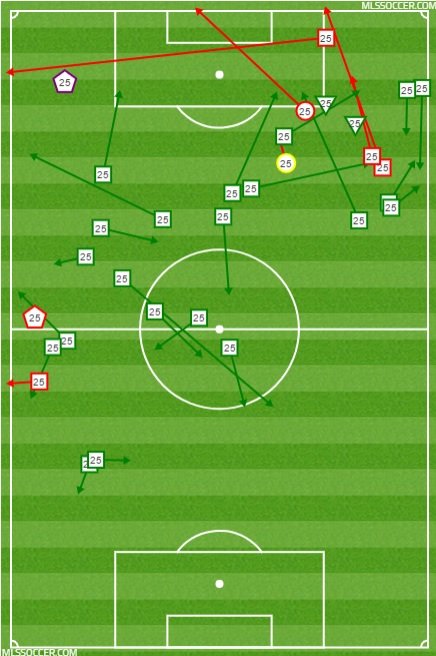 You're looking at two shots from outside the box, one that missed high and one that was blocked.

He had two successful dribbles in that same area, conceded one foul, and went offside once on the other side of the field.

Passing wise, he went 21 for 24, missing on two right-sided final third attempts and a miscommunication in the defensive half.

That looks good on paper, but there's still very little meaningful activity in and around the final third. There's a sequence around the 59th minute where he has two final third entries, but then you've also got ten passing attempts that go sideways or backward in the middle third and back-third of the field.

They will need more out of this position because it's a huge, gaping hole of mediocrity right now.

I thought for sure he would have a shot when he made that run into the box, but elected to lay it off instead. Early-season C.J. probably tries to put that on goal.

He's four games without scoring now and only has one shot on goal in that time frame. It's the same slump that we've seen in years prior, but his work in the hold-up game keeps him on the field.

That said, I do think he was snubbed from the Gold Cup roster. Jordan Morris and Dom Dwyer probably have more to give to the USMNT, but they have not been better than Sapong in MLS this season.

There's no end product from the Brazilian, whether he plays wide or in the middle.

The best part about the goal was that he didn't try to kill the ball, he just waited and hit it flush with the side of his foot.

Picault has suddenly become the most dangerous player on this Union team, and he's going to have to be since Sapong, Pontius, and Ilsinho aren't scoring goals. It's ironic to think that he wasn't even in the 18 back in April, now he's a guy propping up the entire front four.

He got the assist on the game-winner and it doesn't matter where he was aiming because putting the ball in that kind of area allows your teammates to make a play on it.

His chart was typically Bedoya, with heavy right-side influence (it's the "tilt" Curtin was talking about) featuring defensive wins in the back-half and good service going forward. 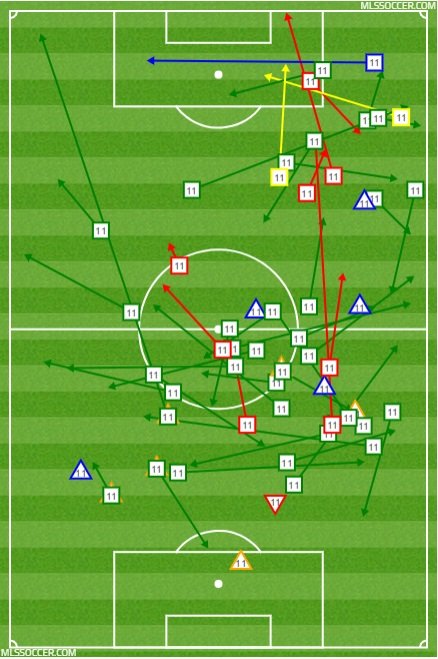 Much better than the last game, he saw more of the ball in better starting positions.

Haris' dead ball service was a little off this game, with a couple of entries coming up a bit short.

Otherwise, his show of sportsmanship in the rescinding of Luciano Acosta's red card increased the profile of a player who is already one of the most likable guys on this squad.

A decent game for Gaddis. I didn't think Lamar Neagle or Taylor Kemp did too much coming down his side of the field, not until later in the second half when Patrick Nyarko was subbed on and Kemp started really bombing up the flanks in search of an equalizer.

The main thing that jumped out at me was the miscommunication on the play leading to the penalty kick, where Gaddis followed Acosta on a 2v2 in the corner instead of allowing Bedoya to switch off and take the run instead.

A couple of hairy moments in preserving the lead, but for the most part, he was his typically calm and solid self.

Nothing he can do about the penalty since the deflected ball comes in after a defensive miscue by teammates.

Onyewu had eight defensive actions but zero recoveries, which makes a ton of sense because you don't need to recover (win back the ball) when you're in the correct position to begin with. Loose balls and 50/50 scenarios aren't taking place in his area of the field.

He did a nice job on Sebastien Le Toux and really limited meaningful attacks coming up D.C.'s right-hand side.

Keep an eye, however, on that quirky imbalance in Union build-up play. Wijnaldum plays almost higher up the field than Fabinho, which creates some interesting wrinkles in the way that the team moves the ball around the back.

He's playing at last year's All-Star level and has a chance to really increase his transfer profile with a good showing at the Gold Cup.

Good work in the hold-up game and a couple of chances on goal. He'll get back on the scoresheet eventually.

At this point, I'd rather see him back in the starting #10 spot.

Brought some energy off the bench and helped close out the game.

Yeah, he got the red card wrong, but I still give him credit in that situation for listening to Medunjanin and eventually making the correct decision.

Remember, it doesn't matter how we get from point A to point B, and even if that whole sequence was a procedural disaster, we still arrived at the best outcome.