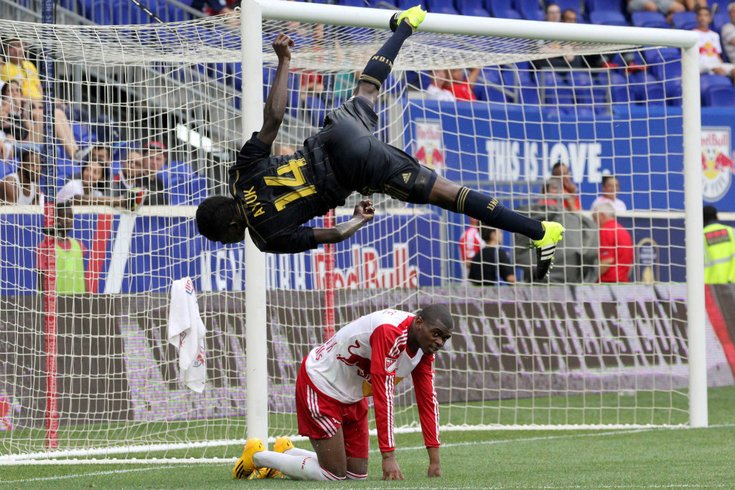 Eric Ayuk celebrates his opening goal in the 2015 U.S. Open Cup quarterfinal game at Red Bull Arena. The 10-man Union advanced on penalties after playing to a 1-1 draw in regulation.

Alejandro Bedoya is with the U.S. national team for Gold Cup preparations, but Union teammate Andre Blake has yet to join the Jamaican squad.

The red-hot goalkeeper trained partially on Tuesday afternoon before undergoing X-rays for a rib injury that head coach Jim Curtin says was sustained during the 1-0 win against D.C. United Saturday night.

"He'll be with us through Sunday," Curtin told reporters after training. "He did pick up a knock in his ribs (in a collision with D.C. center back Steve Birnbaum). He's getting an X-ray to make sure that it's nothing serious. We'll see where that stands, but yeah, a guy who is in our plans for (Wednesday) and also for Sunday."

Elsewhere on the injury front:

• Fabian Herbers is a full participant in training after missing about a month with an abductor issue.

• Warren Creavalle aggravated a hamstring injury and likely will not be ready for Sunday's game against New England.

• Richie Marquez has "tendinitis" or "soreness" in his right knee and is not training. An MRI came back negative. Curtin says the injury took place on the "beautiful baseball field" in Harrisburg, where Marquez played for Bethlehem Steel last Wednesday.

Not the right fit

The Union will not be adding a new number ten to the roster, at least not right now.

Elias Aguilar, a 25-year-old attacking midfielder, is no longer training with the team after spending the majority of last week in Chester.

"He came in and had a good four days of training with the group," said Curtin of the Costa Rica international. "He was not a fit for the team. So, again, I've read reports that there were all of these financial discussions going on, (but) it's never even gotten to anything in terms of money, or financials, or loans, or buying. We took a look. A talented player, but at the same time was not a fit for us."

For what it's worth, reports out of Costa Rica suggested that the Union wanted Aguilar on loan, while the player and his club, Herediano, wanted a full transfer.

If I was Jay Sugarman, I'd break the bank for out-of-favor PSV attacker Adam Maher:

Bedoya and Blake are the only international call-ups for this window, but C.J. Sapong and Chris Pontius were on the initial 40-man list for Bruce Arena's United States team.

Pontius, who scored 12 goals last year, has yet to find the back of the net but is currently the Union's assist leader.

Sapong is the Union's scoring leader and has more goals (8) than the three players who made the roster ahead of him:

Even if you took away the two penalties that Sapong scored, that only brings him down to six. And if you want to say that he also poached a few goals and scored off a deflection, then we'll consider that context as well.

But I really have a hard time believing that Morris, Dwyer, and Agudelo have been that much better than C.J. in 2017.

Maybe the call-ups have to do with a style of play, age, or a combination of both. Fair or not, Sapong is typecasted as a target-man who doesn't have the goal-scoring capabilities of the other three.

I wonder what he'd be able to do while surrounded with international-quality players, but I guess we'll never find out, will we?

I asked Curtin about it on Tuesday:

"In terms of formation and how Bruce wants to play, I'm not positive how he wants to come out in this Gold Cup," Curtin said. "You'd think it's probably with two forwards, but I'm not positive. They have some kind of hybrid guys on that roster in (Gyasi) Zardes and others that he is familiar with. So, I don't want to speculate too much, but I think C.J. could have helped, for sure. He's a guy that has had sharpness in front of goal. When he's confident and feeling good he's a handful and he's a great striker in our league.

"C.J. maybe falls on the wrong side of a tough decision because there is the (idea of) 'we want to see Dom Dwyer, we want to see what he's about.' You respect that, and he's obviously been playing well, too. Jordan Morris has had a quiet year but he's still an incredible, young player. He has the 'youth' maybe on C.J.

"So you could probably look at each guy and pick a reason. There's that Zardes factor too, because Bruce knows him so well. He's played him in the wide midfield but he's also played him underneath of Robbie Keane. It starts to get crowded. They're all good forwards and C.J. made a great case for himself with a great start to the year.

"Most importantly, for the Philadelphia Union now, we hope he puts together the same thing in the second half. Then I think national team call-ups can be part of his future for even bigger games."

Going back to Harrison

The Union traveled to North Jersey on Tuesday ahead of the round of 16 Open Cup game against Red Bull.

You probably remember the last time Philly went to Red Bull Arena for the USOC, a matchup that became an instant classic with a lot of interesting context.

It was the 2015 quarterfinal game, played at 4 p.m. on a Wednesday afternoon because the arena was already hosting an international friendly that night.

Lobbying for a change of time and/or date, the Red Bull front office was stonewalled by Philadelphia in what was one of the most important and effective campaigns ever conducted by Nick Sakiewicz and his staff. The Union successfully forced the game to be played in the afternoon, limiting Red Bull fan attendance while also funding a bus trip to get Union fans to Harrison.

That resulted in an even split inside the stadium, with traveling support nearly outnumbering home fans.

The 10-man Union scored first on a brilliant counterattack before conceding a 94th-minute equalizer and eventually winning on penalties.

I ranked Eric Ayuk's strike #7 on my top ten list of all time Philadelphia Union goals.