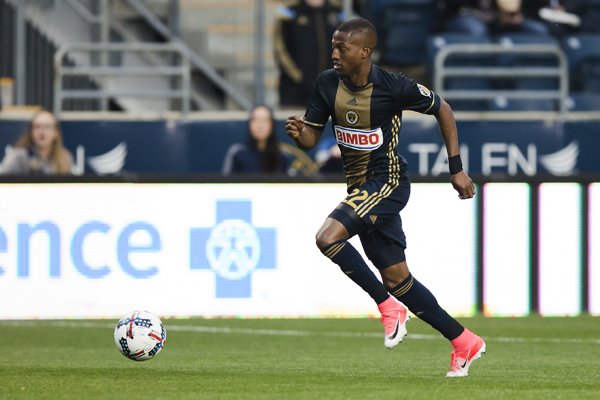 Fafa Picault couldn't find his way onto the score sheet despite finishing with seven shot attempts in the Union's penalty shootout loss to Red Bull on Wednesday night.

Did either team really deserve to win that game?

You have the New York Red Bulls turning in another boring performance on their home field.

Then you have the Philadelphia Union, who rallied impressively in the second half only to be let down by incredibly disappointing finishing.

For the Union, that's a 30 percent ratio of shots on goal per total attempts. Seven of the off-target shots were blocked.

For the Red Bulls, that's a mark of 24 percent. with six blocked shots.

Combined, both teams went 12 for 44 in this category, putting a measly 27 percent of shots on frame.

Here are ten more thoughts on the game:

Picault has clearly turned out to be Earnie Stewart's best offseason signing.

He was a constant threat, getting behind defenders and using his speed to create all sorts of problems for the New York backline.

That said, he couldn't get on the score sheet despite seven shot attempts and two 1v1 opportunities with the goalkeeper, the first of which he hit straight at Ryan Meara and the second of which he skied over the bar from a tight angle.

Picault's performance reminded me of early-career Fabian Castillo, the Trabzonspor winger who became a revelation at FC Dallas.

Castillo had speed to burn and created tons of opportunities going forward, but his end-product always left something to be desired. He scored only twice in 2013 before finally breaking out the next season, finishing with double-digit goals and upping his total from two to ten.

This was the killer opportunity that went begging:

Sapong played on the wing in this game and put two of six shots on frame, clanking one off the post in the second half.

He now has two goals in his last nine MLS and Open Cup games, scoring against Colorado on May 20th and Harrisburg on June 14th.

C.J. doesn't need to score to be successful, as his target man qualities are usually enough to allow his teammates to thrive in a defense-first, 4-2-3-1 system.

But when the rest of the front four isn't scoring, C.J. faces more pressure to be that guy, whether it's fair or not. Last night's performance doesn't help the narrative that he hits a summer wall each season.

Here's the combined shooting chart for Picault and Sapong, which shows 13 combined efforts, five of which that were on target and two that were blocked: 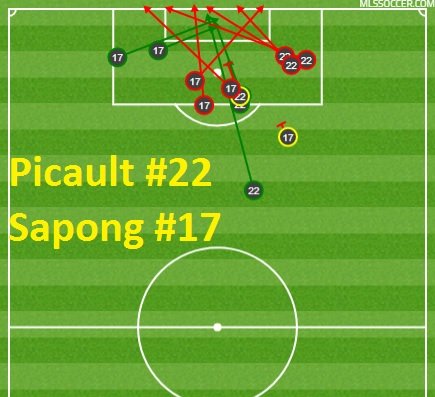 3. Jack Elliott is a revelation

He's like a calmer version of Axel Sjoberg with better passing ability.

Elliott might actually be the best center back on the roster right now, which is wild when you consider that he was a late round draft pick who entered the season as the fourth or fifth CB on the Union depth chart.

Whether or not Elliott was aiming for Alberg is irrelevant. I'm willing to bet that he saw three Union bodies in that area of the field and hit the quick pass, playing the odds with the recognition that his team had numbers forward.

You don't see this kind of awareness from rookies at all, let alone defenders.

4. Adam Najem will be a player

He might not be ready just yet, but he shows flashes of quality that suggest he has a long-term future with this team.

I think the main thing right now is trying to figure out whether he's a #8 or a #10, as he seems to be a bit of a "tweener" in the central midfield. He has very good spatial awareness and picks out smart passes, but he also exhibits some Vince Nogueira-like traits in deeper positions.

He should at least be starting every single Bethlehem Steel game for the rest of the year in an effort to figure that out.

5. Marcus Epps has plenty of upside

I thought the rookie was just another speedy winger when I first saw him play, but he had a couple of moments in this game where he showed quality stop/start ability with that Cruyff turn in traffic.

Maybe he's not a one-dimensional player. Maybe he's a guy that can evolve his game and become a tricky winger with a wider-ranging skill-set.

Unfortunately, the biggest takeaway from this one will be the late-game attempt he blazed over the net.

Is it mental? Is it physical? Is it both?

Keegan hit the sophomore wall, and he hit it hard.

He's partially culpable for the New York goal, which was a textbook high press and turnover situation, creating a 5v4 in the attacking third:

7. ...but Josh Yaro was also culpable

When you replay the sequence, Yaro's first touch really lets him down.

No issue with the Elliott pass here; that's a great switch of fields to move Red Bull side to side and an example of how Philly found success beating New York last season with horizontal ball movement.

Yaro fumbles the pass, gives up his back, then puts Rosenberry in a tough situation. New York pounces on both pressing cues, moving numbers into the box while Elliott rotates to cover. Derrick Jones and Fabinho are nowhere to be found. 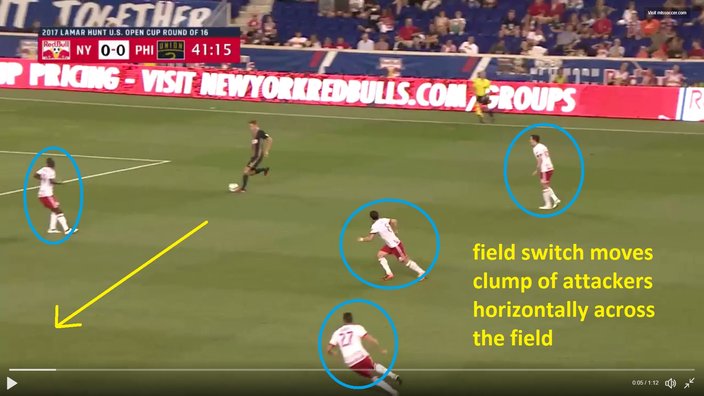 The Union system runs a lot smoother when you have a big-bodied target man fronting the attack.

Jay Simpson isn't that guy. He's just not a center forward who can do the same physical things that Sapong does.

If you watch highlights of the goals he's scored over the course of his career, there's a lot of reliance on teammate service and opportunism. He'll poach the occasional goal but thrives when he gets moving and runs at/or behind defenders.

Simpson finished with one off-target shot, lost the ball twice, conceded one foul, and tried 16 passes in a 61-minute shift. 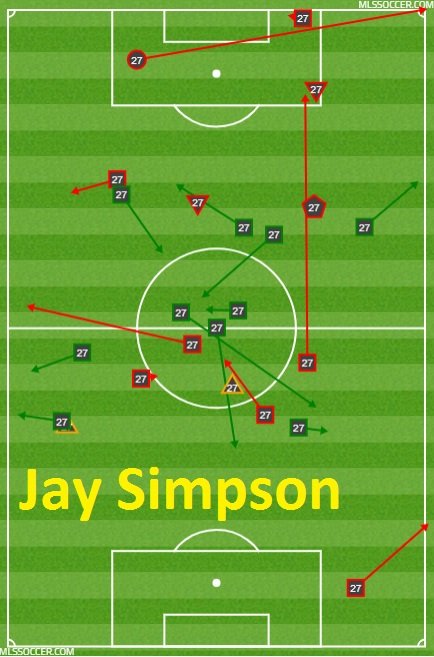 9. Roland Alberg should be starting

Alberg is still the best option at the No. 10 spot because he's a quality finisher and at least gives you some threat going forward.

You aren't getting it from Ilsinho.

Alejandro Bedoya is not a number ten.

And the formation isn't going to change, so put Alberg on the field, put the ball at his feet, and see what happens.

This is the guy who went on the Union's radio show and called Technical Director Chris Albright "a failure."

Another failure is Messing's "color commentary," which is basically a random sampling of knee-jerk reaction and some matter-of-fact statements based on non-existent replay angles and non-existent attention from his perch.

Messing, like most American color guys, offers nothing about tactics, shape, or strategy.

He's not necessarily a homer, since he did throw some criticism at the Red Bulls last night, but man is he annoying.

Jay Simpson is "useless" & Fafa Picault's finishing is "horrific," per Shep Messing, who may still have a grudge against Union front office.