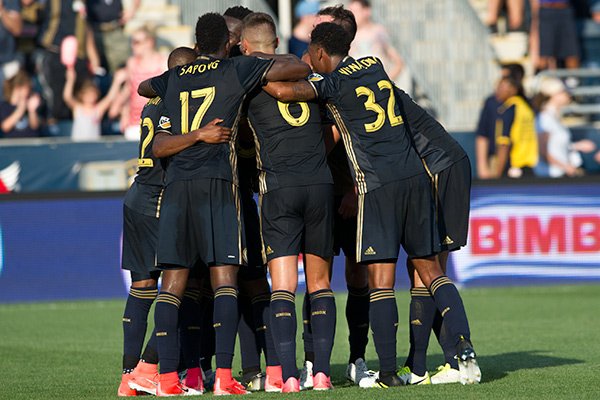 Union players swarm Roland Alberg after the Dutchman scored a 25-yard curler in the 3-0 win over New England.

You're expected to do the job when playing at home against a team missing three of its best attacking pieces.

The Philadelphia Union handled their business on Sunday afternoon, cruising past the New England Revolution in a 3-0 victory that saw Jim Curtin's team ascend to eighth in the Eastern Conference, now just three points out of a playoff spot.

That's six out of nine points claimed on the three-game homestand, which now turns into a three-game road swing, with trips to Kansas City, Montreal, and Columbus over the next three weeks.

When possession actually does tell the story

In the opening statement of Curtin's post-game press conference, the Union head coach explained that C.J. Sapong's early penalty kick goal might have thrown off his team's first-half rhythm and tempo.

"Obviously, early goals can sometimes change games," Curtin said. "The early penalty made us play a first half that was maybe a little, I thought, tentative in terms of our pressure to the ball, something that, if we don't have, we're not a strong team and I felt that the first half we allowed New England too much time and space in our home building. We talked about it at halftime, about closing guys, in terms of coming out of that jog, it's almost as if we were jogging side-to-side, protecting a one goal lead, which is a dangerous ask in this league."

It did seem like a rather lethargic opening half, with New England seeing the bulk of the ball.

The first half finished with a 58 percent to 42 percent possession advantage for the visitors, which is strange when you consider that most Union games are very even in this statistic, usually finishing with a +/- of only three or four percent. 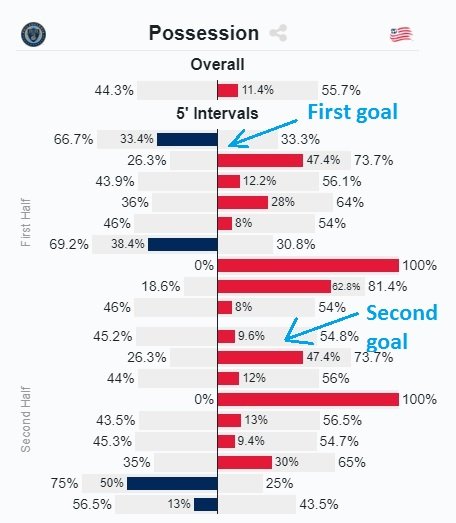 You see the game actually finished 56 percent to 44 percent despite the Union clearly being the better team on the day. There's an opening period of five minutes where Philly controlled possession, then a run of 20 minutes where New England had much more of the ball as they tried to respond to the early goal.

There are big spikes in possession after the first two goals, which shows the Union backing off after scoring. The early goal completely threw off the entire chart, which is why the final numbers look so lopsided.

Also, disregard those two sections where New England has "100 percent possession," because that's a quirk that shows up on the chart due to the pair of water breaks.

The pattern is also illustrated in New England's shooting chart, where seven of 10 shot attempts took place within a 42-minute chunk of the game. This graphic shows the Revs' attempts on goal during the span of time between the first and second Union goals. 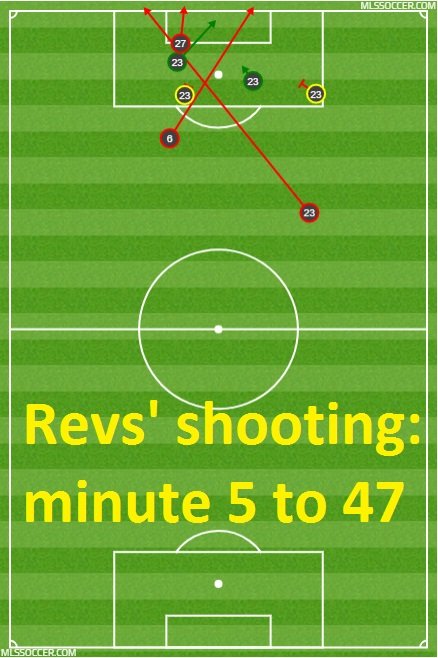 The Revs' produced 70 percent of their offensive output in a time period that comprised just 42 percent of the game, even with superior possession numbers.

When to stay and when to go

We've talked about the Union's tendency to build up the right side of the field when Alejandro Bedoya plays next to Haris Medunjanin.

With Bedoya on international duty, his spot goes to Derrick Jones, a guy who spends about equal time on both sides of the field. 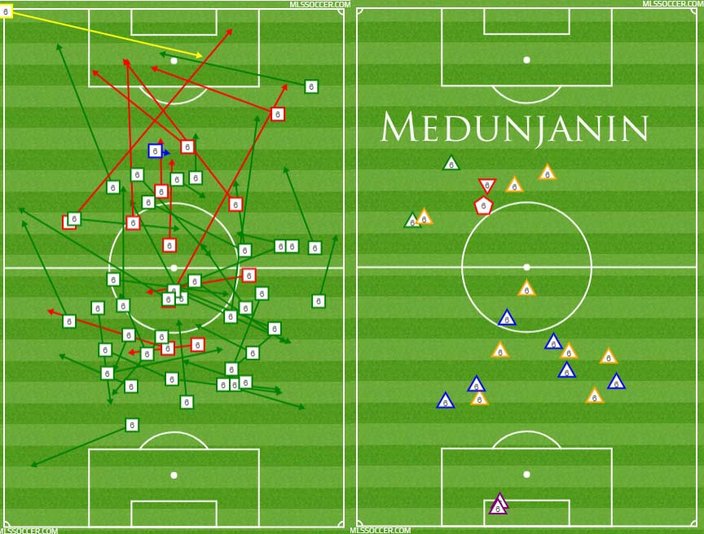 Jones' charts show the same balance in passing, which is different from what you get in a heavily right-sided Bedoya performance. For whatever reason, though, Jones just didn't do too much defensively in this game.

He finished with one interception, one clearance, and two recoveries. He won three fouls and conceded two while going 1/2 in dribble attempts.

Here's what Medunjanin said after the game on the difference between playing next to Bedoya and Jones:

"Jonesy is a young guy and he wants to run everywhere and sometimes I tell him it is impossible. Like today, you cannot waste your energy on stupid things. We need to combine, sometimes you need to go, sometimes you need to stay. Because Bedoya is a more experienced guy he knows when to go and when not to go. There is a difference between these guys, but Jonesy is stepping up every game for us and he is an amazing player and I am happy to play next to him."

Medunjanin is right; Jones will start to get better in that department. He had a strange assignment on Sunday, with a depleted Revs team actually playing with three defensive-minded guys in their central midfield, absent of a true #10. Their most creative player, Lee Nguyen, was used on the left, while Jones was matched up against a combination of Gershon Koffie, Scott Caldwell, and Je-Vaughn Watson.

Got his ninth goal of the year on an earned penalty.

He also had three key passes and was robbed of an assist when Ilsinho missed later in the second half.

Continues to do his defensive duties on the right but has now gone six games without a goal or assist.

Scored a banger of a goal, then missed from 13 yards away.

You see the potential with Ilsinho, who continues to show those flashes of brilliance while that complete and next-level performance still eludes him.

A wonderful assist on the Ilsinho goal, he had a couple of chances to get on the scoresheet himself but couldn't find the back of the net.

He had a couple of intense foot races with Andrew Farrell that exhibited his elite speed while also showing that the end product of those sequences still leaves something to be desired.

A decent game for Jones with an odd matchup against a non-traditional cluster of opposing midfielders.

A couple of killer dead ball services and a bunch of defensive actions in the win.

The only negative I saw was a first-half hospital ball that sprung a New England counter and forced Blake into a big stop.

Did you hear his name called?

He teamed up with Pontius to do a nice job on Lee Nguyen coming down that side of the field. Nguyen roamed all over the place and finished with just two key passes, both of which were corner kicks on the opposite side of the pitch.

There may have been one bad ball in the first half, but he was typically calm and composed before coming out of the game with a minor injury.

Another clean sheet and mop-up defensive performance while also surviving this:

Earned high praise after the game but had a couple of iffy first-half moments. He adjusted nicely and did a good job against Kei Kamara, who had the tendency to peel into his corner looking for space.

Didn't have to do too much on the night but had a big early stop after the Medunjanin turnover.

Came in with a 2-0 lead and helped ride it out.

Scored a 25-yard rocket on his first touch of the game, which somehow was not nominated for goal of the week.

I'd still start Alberg over Ilsinho at this point.

Philadelphia Union's Roland Alberg scored this with his first touch off the bench last night...

He'd only been on for 4 seconds. 😮 pic.twitter.com/xOMext3fpo

Played as a defensive mid to close out the win.

I'm not convinced that the Revs' handball took place inside the box. While the defender's feet are on the line, I think his torso is turned, which would put his arm outside the line.