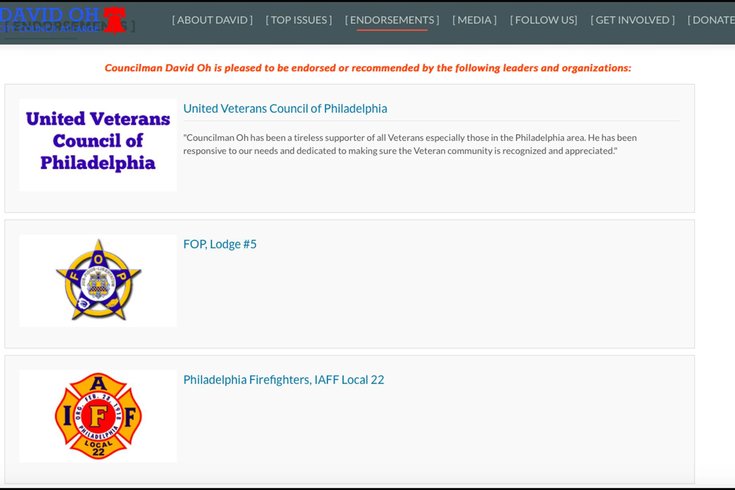 FOP Lodge 5 and IAFF Local 22 are asking Republican Councilman David Oh to remove their names and logos from his campaign website, saying they have no intention of endorsing him.

Philadelphia police and firefighter unions are calling on Councilman David Oh to remove their names and logos from his campaign website, saying they have not endorsed the at-large Republican.

John McNesby, president of FOP Lodge 5, and Andrew Thomas, president of Firefighters and Paramedics Union Local 22, released a statement Monday saying Oh will not be endorsed by either union.

"It has been brought to our attention that incumbent City Councilman David Oh continues to claim through his campaign website and literature that he is endorsed by Philadelphia's police and firefighter unions. He most assuredly has NOT received our respective endorsements for the November 3rd General Election, nor will he be receiving our endorsements. It is utterly shameful and disingenuous of Councilman Oh to be falsely claiming our endorsements for his own political gain. Today we call upon Councilman Oh to immediately cease and desist using our respective union logos and names on his campaign website and in all campaign literature."

On Oh's campaign website, the councilman says he is pleased to have received endorsements or recommendations from the two unions.

Oh is seeking a second term as an at-large councilman, running against fellow incumbent Dennis O'Brien, Al Taubenberger, Dan Tinney and Terry Tracy. He did not immediately respond to messages left at his city council and campaign offices.