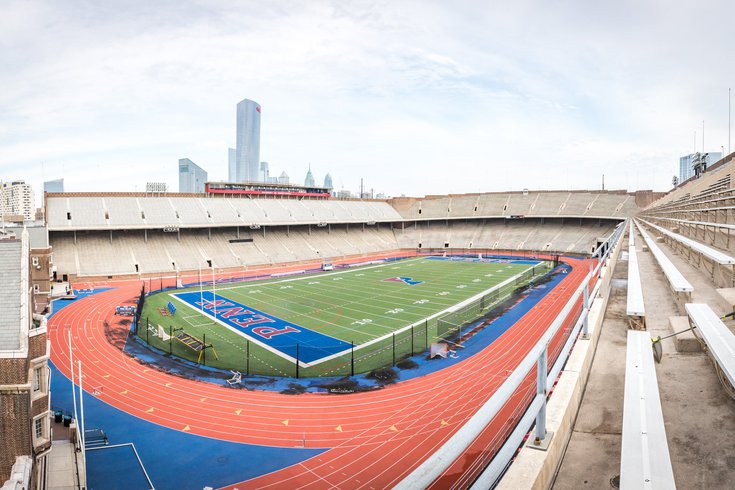 The University of Pennsylvania is set allow some on-campus athletic activities to resume starting Monday, Feb. 1, university officials say. Above is a file photo of Franklin Field on Penn's campus.

For the first time since the COVID-19 pandemic began March, some University of Pennsylvania athletics teams will be permitted to resume training on campus in February.

"The Division has received University approval to begin athletic activity on Feb. 1," Bonner's statement said, "provided the City of Philadelphia does not issue updated guidance that prevents these plans from being initiated."

The college's student newspaper, the Daily Pennsylvanian, was first to report Penn would resume its sports programs in the coming weeks.

February will be the first time that Penn's sports teams, which compete in the Ivy League conference, will be permitted to officially practice during the 2020-2021 school year.

The Ivy League had canceled the remainder of last spring season and then its fall season, saying games wouldn't be allowed to resume until at least the end of February 2021. It was the first Division I conference to do so, and the Ivy League basketball teams are the only Division I teams not currently competing.

Other Philly colleges that compete in Division I – Villanova, Drexel, La Salle, Temple and St. Joe's – resumed their sports programs this winter, after postponing many of their teams' fall seasons, and are having varying levels of success with players avoiding being infected by the coronavirus.

Notably, the Villanova and Temple's men's basketball teams' seasons have been put on pause several times due to COVID-19 outbreaks.

The Temple Owls men's team has entered a 14-day coronavirus quarantine at least twice since their season to began in November.

For the Ivy League, there is still no firm date when games will resume. "All competition in the League continues to be postponed at least through the end of February," Ivy League spokesperson Matthew J. Panto said.

The partial reopening of Penn's sports is permitted under health and safety guidelines in place for Penn's spring semester, which started Jan. 10. That plan has brought students back to campus for a transition to hybrid learning. Classes are taking place virtually and in person. About 3,000 students are back on campus for the spring.

In the fall, Penn initially invited students back for in-person classes, before the school switched to remote learning for all undergraduate students just weeks before the semester's start.

Penn's reopening for the spring semester has sparked concerns among members of University City and West Philadelphia's communities, where Penn is located. Some of those residents have called it it "incredibly selfish" for the university to put community members at risk by inviting college students back to the area.

The school's return to hybrid learning is now underway along with a testing program initiated to alter outbreaks among Penn's student body. Cases are being tracked on Penn's COVID-19 dashboard.