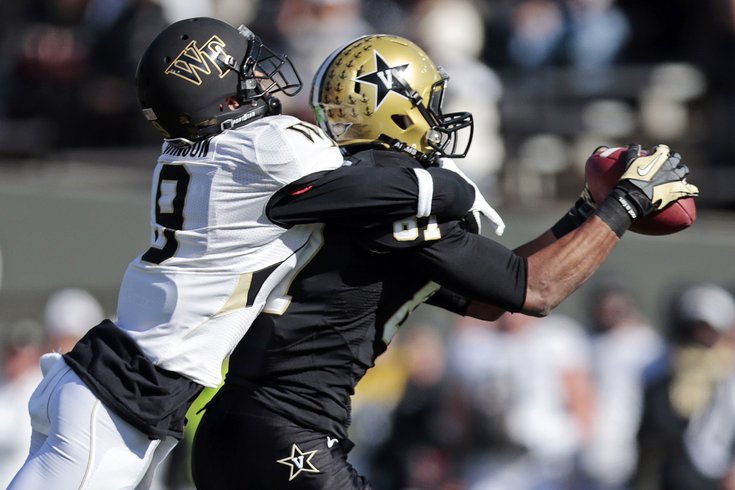 As we noted early last week, if the Eagles bring in a prospect for a pre-draft visit, their chances of being drafted by Chip Kelly go up drastically. Six of the seven Eagles draft picks a year ago were among the Eagles' 30 allotted pre-draft visit to the NovaCare Complex.

Here are two more to add to the list:

Unlike some other talented undersized inside linebackers in the 2015 draft (Shaq Thompson, Denzel Perryman, Eric Kendricks), McKinney is a big athletic freak of nature who Mississippi State lined up all over the field. There is concern that McKinney may struggle in coverage against NFL passing attacks, but as a run defender and pass rusher, he is a very intriguing prospect at ILB in a 3-4 defense.

Johnson has good enough height at 6'0, and is thought of as a well-rounded NFL-ready corner. He tested all over the map at the Combine:

If you'll note above, he tested well in the explosive drills (vertical jump, broad jump, 20 yard shuttle), but poorly in the drills that measure long speed (4.52 40 yard dash, 60 yard shuttle). Johnson is beginning to be thought of as a potential first round pick, but his long speed and dearth of big plays (7 INTs and 3 FFs in his four year career) should give teams pause.

To note, one of the reasons the Eagles may be bringing Johnson into their building is because they couldn't talk to him at the Senior Bowl, which Johnson skipped out on.

According to a source, the Eagles "met extensively" with Colorado State-Pueblo defensive lineman Josh Bredl. According to that source, they also met with San Diego wide receiver Reggie Bell. Bell's numbers at San Diego:

Bredl and Bell are unlikely to be drafted, but could be on the Eagles' radar as undrafted free agents.