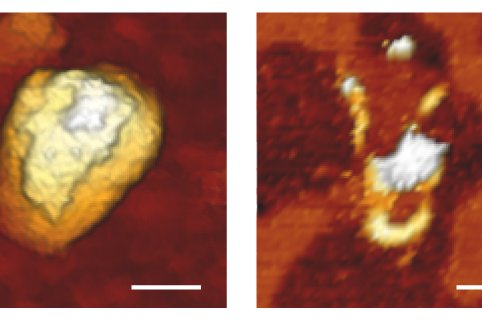 This photograph from an electron microscope shows how a molecule called CLR01 destroys the virus that causes AIDS.

Scientists at the University of Pennsylvania were researching a molecular compound's effects on Alzheimer's disease when they discovered a surprising bonus: the compound appears to also prevent the transmission of HIV.

When tested in semen, the tweezer-shaped molecule both destroyed the virus and broke apart proteins in semen that help transmit the infection, Newsworks reported.

The molecule, called CLR01, works by targeting proteins called amyloid fibrils which help the virus attach itself to human cells.

"In the presence of CLR01, human cells exposed to semen that contained HIV were at least 100-fold less likely to become infected with the virus," the University said in a news release.

Different kinds of amyloid fibrils that build up in the brain are associated degenerative diseases like Parkinson's and Alzheimer's. The scientists studying CLR01 are part of an international team called Breakthrough Treatment for Degenerative Diseases.

The molecule also appeared to be effective against hepatitis C and certain strains of herpes.

The compound has not yet been tested in animals, but the research team plans to test it in mice or primates.