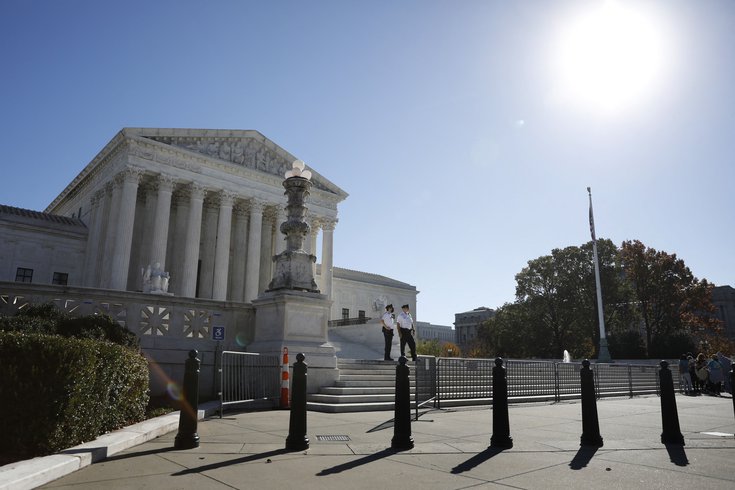 Legal arguments have taken place in the U.S. Supreme Court case of Fulton v. City of Philadelphia. The case centers on whether Catholic Social Services can legally discriminate against potential adoptive and foster parents on the basis of their sexual orientation.

The day after Election Day, while everyone was still watching the vote counts, legal arguments were taking place in the U.S. Supreme Court in Fulton v. City of Philadelphia. The case raises questions about whether an archdiocesan adoption agency in Philadelphia can legally be permitted to discriminate against potential adoptive and foster parents on the basis of their sexual orientation. As the first case to come before Justice Amy Coney Barrett, the implications could be long-lasting for both LGBT rights and religious freedom advocates.

Here's everything you need to know:

What prompted this debate?

In March 2018, two agencies providing foster care services to children in Philadelphia's care expressed that they would not, based on religious objection, be willing to accept same-sex couples as foster or adoptive parents. When city officials informed both taxpayer-funded agencies that Philadelphia would no longer refer children to them unless they agreed to comply with the city's non-discrimination requirements, only one of the agencies agreed to do so. The other, Catholic Social Services – or CSS – a foster care services provider operated by the Archdiocese of Philadelphia, refused to comply, arguing that same-sex couples would not be considered as suitable parents for children in Philly's foster care system based on the agency's religious beliefs.

Can the city legally enforce this non-discrimination law?

That's the argument. The city says that any agency it works with and that receives taxpayer money must comply with a law prohibiting discrimination based on sexual orientation. In 2019, Philly updated its contracts with all foster care agencies working directly with the city to ensure compliance. CSS, however, argues that the law, which prohibits LGBT discrimination, is a form of religious discrimination that's in violation of First Amendment's protections for religious exercise.

How did this end up all the way at the U.S. Supreme Court?

First, CSS sued the city in 2018 for an exemption from the nondiscrimination law and filed a preliminary injunction asking the court to require the city to continue its contract while the case was being decided. A U.S. district court judge denied this injunction, ruling that CSS did not have the right to exclude same-sex couples from foster care and adoption consideration. CSS appealed the district court judge's ruling and filed an emergency injunction with the U.S. Court of Appeals for the Third Circuit, asking that the court force the city to continue referring cases to CSS (and continue paying for services) while the appeal was pending. The Third Circuit said no, and the emergency injunction was denied.

Then CSS filed an emergency application for injunctive relief with the U.S. Supreme Court, essentially asking SCOTUS to force the city to continue referring cases and paying CSS during the appeal. SCOTUS denied the application (though justices Clarence Thomas, Samuel Alito and Neil Gorsuch all said they would have granted it).

By this time, the U.S. Court of Appeals for the Third Court upheld the initial district court's opinion, ruling that the city is entitled to require taxpayer-funded child welfare agencies that it contracts with to abide by non-discrimination requirements. CSS wasn't happy with the ruling and filed an appeal with SCOTUS, which was granted.

What is the basis for the religious freedom argument?

The case most often cited in religious freedom debates is Employment Division v. Smith, a 1990 Supreme Court case that held that a state could deny unemployment benefits to a person fired for violating a state prohibition. In this case in Oregon, the question was about the use of peyote, an illegal hallucinogenic drug that is used in the rituals of some religions. SCOTUS determined that even though states essentially have the power to accommodate illegal acts in pursuit of religious beliefs, they are not actually required to do so.

Interestingly, the majority opinion in this case came from conservative Justice Antonin Scalia, who said that the government may not regulate religious beliefs, either by compelling or forbidding them. Basically the majority decided that the First Amendment protection of "free exercise" of religion does not allow someone to use religious motivation as a reason not to obey generally applicable laws.

There are other cases, like Reynolds v. United States from as early as 1878, that also do not allow religious laws to override so-called "laws of the land" so as to avoid permitting "every citizen to become a law unto himself."

Most recently, the case that ushered in same-sex marriage, Obergefell v. Hodges, also provided context. In his decision, Justice Anthony Kennedy emphasized the dignity of LGBT rights, specifically the right to marry. He wrote, "There is dignity in the bond between two men and two women who seek to marry and in their autonomy to make such a profound choice."

How could these earlier decisions impact Fulton v. City of Philadelphia?

Is there any sense of what the court may decide?

Conservative justices now hold a majority on the Supreme Court and they will likely be the deciding factors in the ruling, which is expected to be handed down sometime next year. Based on the oral arguments from Oct. 4, conservatives, including Justice Brett Kavanaugh, seem to be leaning toward CSS. Kavanaugh accused Philadelphia of "looking for a fight" in this case, and calling the city's position both "extreme" and "absolutist."

Justice Samuel Alito also said on record, "If we are honest about what is really going on here, it's not about ensuring that same-sex couples in Philadelphia have the opportunity to be foster parents. ... It's the fact the city can't stand the message that Catholic Social Services and the archdiocese are sending by continuing to adhere to the old-fashioned view about marriage."

Barrett also seemed to suggest that Philadelphia was overreaching, asking whether it's up to a state to control whether doctors at hospitals perform abortions, for example. She also questioned what would happen if the agency refused to give foster children to interracial couples.

Liberal Justice Elena Kagan also asked if the compelling state interest applied only to racial discrimination, but not other forms of discrimination, including sexual orientation discrimination. And Justice Sonya Sotomayor questioned what would happen if a contractor was given the legal power to discriminate against families from other religions, or even someone with a disability.

Justices Stephen Breyer questioned why CSS couldn't simply note its objections to same-sex couples while still working with them to comply with the city's anti-discrimination laws. CSS attorney Lori Windham said that even with a disclaimer, the organization would be forced to "evaluate, assess and approve" of relationships that go against the agency's religious beliefs.

It should be noted that the Department of Justice filed a brief in support of CSS, contending that Philadelphia's non-discrimination policy shows "hostility toward religion." It also said, in part, "the United States has a substantial interest in the preservation of the free exercise of religion."

What could ultimately be decided?

If the Supreme Court upholds the lower courts' rulings, it is determining the city is legally entitled to stipulate that the agencies with which it has contracts, that receive taxpayer funding, must abide by Philadelphia's anti-discrimination laws. If the majority of justices disagree with lower courts and side with CSS, it will be determined that the city government is violating the agency's First Amendment rights by requiring a religious-based agency to follow an anti-discrimination law that contradicts the agency's beliefs.

What are the implications?

If the SCOTUS gives an exemption to CSS, it could have major implications beyond foster care and adoption. LGBT advocate believe a ruling in favor of CSS could allow private government contractors, paid with taxpayer money, to refuse service to people because of their sexual orientation. It may also give a contractor grounds to refuse to work with a religiously affiliated group.

But if the court rules that CSS can be compelled to follow government laws in order to work with the city, subsequent contractors will either need to abide by those laws or opt out.

Because many municipal and state governments in the U.S. contract with private agencies to provide child welfare services – and many of these governments have their own non-discrimination laws – the decision will have consequences for the thousands of children awaiting homes. If agencies are able to override contractual agreements based on religious beliefs, these same agencies would be permitted to turn away otherwise qualified families based on sexual orientation, which could have a major impact on children finding homes.

The decision could also have a profound impact on government contracting across the country, notably how religious-based service providers could potentially refuse to comply with government contracts even though they receive taxpayer money for their services.

Are there any laws banning LGBT people from being foster parents or adopting?

It depends on the state. Existing foster care non-discrimination laws are designed to protect LGBT foster parents and families from discrimination by agencies. But some states still permit state-licensed child welfare agencies to refuse to provide services to LGBT families.

In 2002, an important decision was made by the Pennsylvania Supreme Court after same-sex couples challenged the requirements that the court terminate an existing parent's rights before granting an adoption. The couples argued that Pennsylvania has an exception for parents who remarry, wherein one partner's spouse is allowed to adopt the other partner's child without the first partner relinquishing rights as a parent. But they said when same-sex couples tried to do the same, they were denied. This meant that if one partner had a child, their partner could not adopt the child without the first parent terminating their rights.

The court issued a decision that would ultimately make it easier for same-sex couples to adopt in Pennsylvania, essentially allowing all couples to adopt regardless of sexual orientation, gender or marital status.