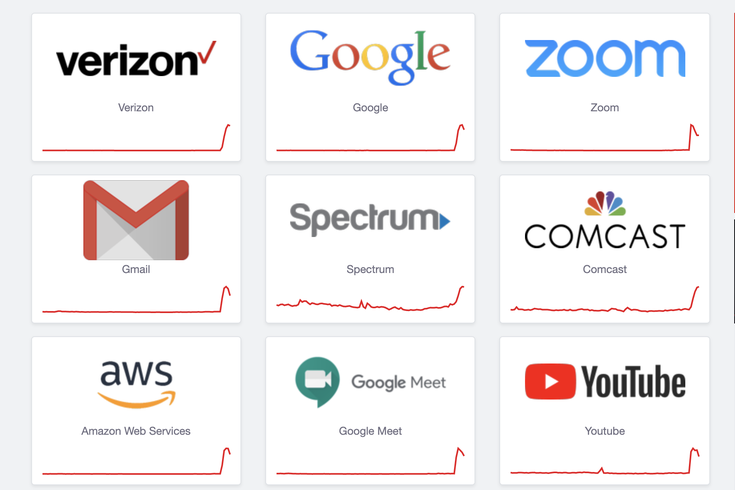 At about 12:45 p.m. Tuesday charts displayed on the homepage for downdetector.com showed spikes in reported outages for multiple services, including Verizon Fios, Google, Zoom, Comcast, Slack and Google Classroom.

A major internet outage is affecting Verizon FiOS customers on the East Coast of the United States on Tuesday, disrupting access to numerous services from Zoom to Gmail, Slack, Amazon Web Services and Google Classroom.

A Verizon spokesperson told PhillyVoice late Tuesday afternoon that an issue with its fiber optic network had been resolved, though residual service issues may persist.

"An internet issue impacting the quality of our Fios service throughout the Northeast has been resolved, and network performance and service levels are returning to normal," the spokesperson said. "We are working to identify the root cause."

An outage map from Downdetector.com shows most of the reported complaints are coming from the Northeast U.S. More than 22,000 users had reported problems with Verizon Fios by early afternoon Tuesday. The issues began to surface around 11 a.m.

Philadelphia is among the cities where there was a reported spike in outage complaints, along with Brooklyn and Queens in New York City, Pittsburgh, Baltimore and Washington, D.C.

Some Twitter users reported their Verizon service disruptions on Tuesday, including several complaints that received a reply from Verizon Support. The company indicated the issues stem from a fiber optic cable that was cut in Brooklyn.

We have been informed of a potential outage in the area and our technicians are working to resolve as quickly as possible. You may visit https://t.co/MFnsE6wLnF for updates once the issue is confirmed.
^DNS

There is a fiber cut in Brooklyn. We have no ETR, as of yet. You can use the MY Fios app for updates. *EAG

Hi Connor! We know how important it is to have a working connection! We're aware that there are some issues happening right now and engineers are investigating. You can use https://t.co/MFnsE6wLnF to look up information for your area. ^TJL

The outage comes as millions of Americans have become especially reliant on stable internet service during the coronavirus pandemic, which has shifted large parts of the workforce to telecommuting and students to remote learning.