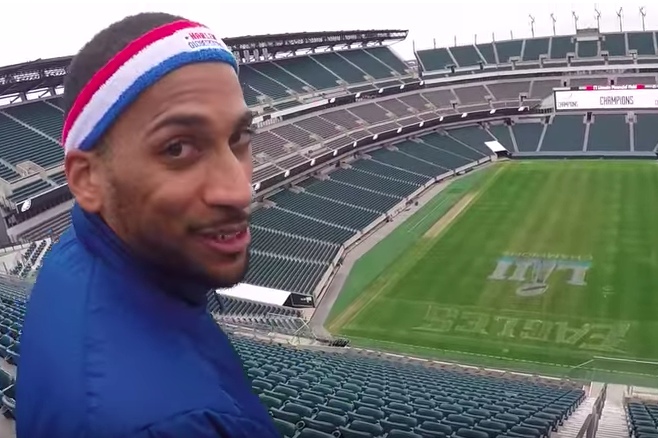 Zeuz McClurkin of the Harlem Globetrotters stands in the upper level at Lincoln Financial Field after hitting a trick shot from the top row of Section 237 to a basket outside the stadium.

The Harlem Globetrotters are set to put their entertaining brand of basketball on display in the Philadelphia area this weekend.

But before tipping off five upcoming exhibition games in Philly and Trenton, two team members teased fans with some trick shots at the Sports Complex in South Philly.

Videos of the dazzling displays at Lincoln Financial Field and the Wells Fargo Center were posted to social media this week.

In the clip posted on Tuesday, Zeus McClurkin and West Philly native Swish Young are shown draining back-to-back shots from the Linc's upper-level concourse to a hoop on the main level below. McClurkin then hit a shot he appropriately dubbed the "Philly Special" from atop the Linc's upper deck in Section 237 into a basket outside the stadium.

The pair is then shown receiving customized black Eagles jerseys from former Eagles receiver Harold Carmichael. The Eagles' mascot, Swoop, and members of the team's drumline and cheerleading squad were also on hand.

We call this one the "Philly Special." Has that been used yet, @Eagles? pic.twitter.com/oFklKdlHYq

Not a bad day when you get to hang out with @Globies and @lookitin! pic.twitter.com/LGsLt4VIur

Another video posted to social media on Monday shows McClurkin hitting a pair of shots from the Wells Fargo Center rafters, including one while wearing a blindfold.

Check that one out here:

From this high up, you have to just trust the process... @JoelEmbiid @Sixers pic.twitter.com/2BB5z6uO4l

The Globetrotters will visit Liacouras Center at Temple University for an exhibition on Friday before playing a pair of games at the Wells Fargo Center on Sunday.

In between, the team will stop at Cure Insurance Arena in Trenton for two games on Saturday.