Man says he plans to file charges; had previous run-ins with the law 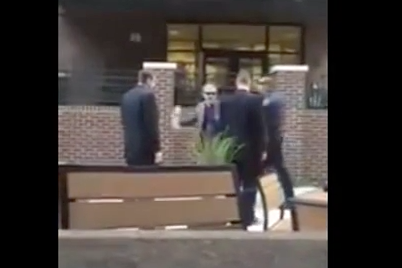 A screenshot of cellphone footage showing a man being tackled to the ground by an Allentown police officer.

Videos of an Allentown police officer throwing a street singer to the ground Friday have gone viral and may lead to a lawsuit.

The videos shows 61-year-old Jim Ochse singing the Beach Boys' "Barbara Ann" outside of the Shula's Steakhouse in Allentown.

When the officer pins him down and begins handcuffing him, Ochse begins yelling "You're going to go to jail," and," I didn't do anything!"

It is not clear in either video what Ochse said to the officer and guards before being tackled, however he does not appear to make physical contact with them. He does point at the guards right before being brought down by the officer and appears to be telling them to "get out of here."

According to the Morning Call, Ochse has had several run-ins with law enforcement before, including being charged for criminal mischief in 2013 and aggravated assault for biting an officer's finger in a 2014 incident with police.

In the latter incident, Ochse only pleaded guilty to resisting arrest and served 6 months probation. The Morning Call reports that the Allentown Police Department is reviewing the incident with the unidentified officer and that Ochse plans to file a lawsuit against the department.