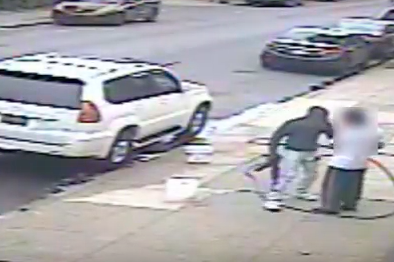 Attempted robbery occurred Saturday, May 5 in the 300 block of South 54th Street in West Philadelphia.

The owner of a beer deli in West Philadelphia showed astonishing guts on Saturday when he drove away an attempted robber armed with an AK-47 type weapon, according to police.

Authorities said the incident occurred around 1:30 p.m. in the 300 block of South 54th Street.

From the 5400 block of Delancey Avenue, a black male suspect approached the 50-year-old business owner who was washing his car outside of his shop.

Surveillance video of the attack, released by Philadelphia police on Tuesday, shows the victim resist an attempt to lead him into his store, challenging the suspect with his bare hands.

Police said the victim was shot in the right hip during the struggle.

The suspect, who fled the scene, is described as a black male in his late 20s. He was last seen wearing a dark hooded sweatshirt and light pants.

Anyone with information about the incident is asked to contact Southwest Detectives at 215-686-3183.