Philadelphia's collective joy, as seen from atop the Rocky Steps

There's a new positive spirit in Philly, and it's all thanks to a football team finally winning the Super Bowl 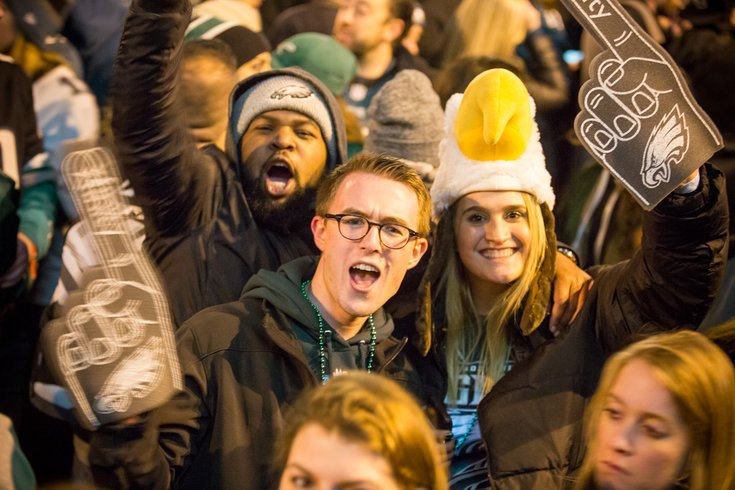 I watched the most amazing sporting event in Philadelphia sports history at Krupa's Tavern in Fairmount.

I sat in the same exact spot where, in 2008, I watched what was arguably – before this weekend, at least in my lifetime – the best sporting event in city history. Superstition is a helluva drug. But, hey, it works sometimes if you believe in that sort of thing.

Once Tom Brady's 20th incompletion of the night hit the end-zone turf at 10:17 p.m. on Sunday, February 4, 2018, I didn't reach for my phone to record the scene like I'm always inclined to do. Nope. I stood on that bar stool and soaked it all in with mine eyes.

I heard screams of relief and elation as fireworks echoed through 27th and Brown streets.

I saw tears of joy making the bar floor slippery.

They were the locals who'd been in that bar when countless seasons ended in predictable disappointment.

They were the twentysomethings from across the street whose cable went out just before Brandon Graham swatted that ball out of Tom Brady's buttery hands into Derek Barnett's loving embrace.

They were emblematic of what was happening all across the city, in bars, restaurants and living rooms.

I felt the aura of something so magical, something so worth the wait, emanating from my, and their, very souls.

It'd be easy to scoff and write that off as hyperbole, which is exactly what Philly's quote-unquote haters will most assuredly do.

Their task is made easier by a social-media machine that churned out videos of fires, looting, cars getting flipped, people tumbling from atop a Ritz Carlton awning and one hero who decided eating horse poop would be a worthy endeavor. (BTW, if that last entry describes you, please email me. I'd like to talk.)

There are so many things more deserving of your attention and passion, they'll add.

This feeling will fade, they'll conclude.

Sometimes, they're right about all that. But this time, they're wrong.

On Friday night, we writers at PhillyVoice got our marching orders regarding what to do "When the Eagles win."

It was a tricky one for this fan who'd never pretend to be full-blown diehard, at least when it comes to the football franchise itself. (That's changed a bit courtesy of having a 7-year-old son whose gone full bore into Eagles fandom courtesy of Carson Wentz, but let's just say that I'd have passed on a Super Bowl ticket if it meant a diehard got to go instead.)

Never before have I seen a team from Philly that seamlessly blended into the civic ethos.

A rocket-armed, Bible-toting guy from North Dakota improving the way a municipality looked at itself.

Battling back against injuries that, instead of derailing them from their mission, ultimately forged stronger cohesion.

The flea flicker against Minnesota.

The formation of the Crisco Cops unit within the Philadelphia Police Department.

Calling the f***ing "Philly Special" on fourth down vs. the Evil Empire.

What I truly want to revel in is a thought that's been dancing around in my head for weeks, but screaming through every brain cell as I walked all 72 stone steps in front of the Philadelphia Museum of Art on Sunday night.

The walk from Krupa's toward the Rocky Statue district was nothing short of joyously bouncing atop clouds.

People dancing in the middle of Pennsylvania Avenue and Kelly Drive.

Others standing through open sunroofs of honking cars.

There was zero friction (or aggressive vandalism) in this corner of Philly. There was love and the sort of unity that can only come through shared experience. 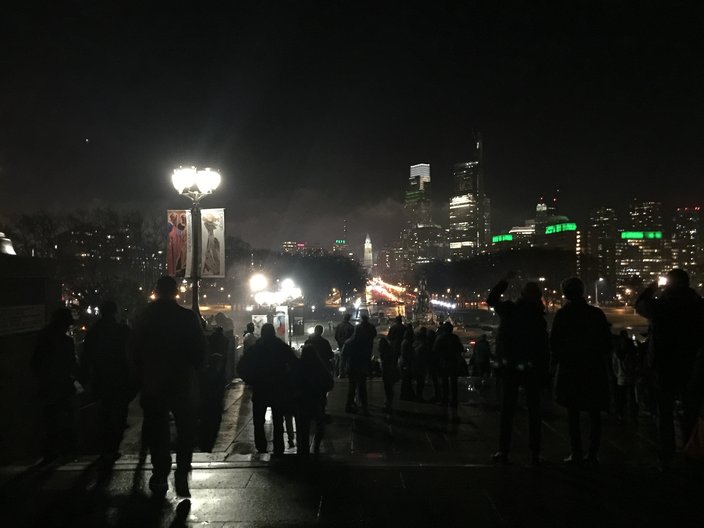 The blurry view from atop the Philadelphia Museum of Art around 11 p.m. on Sunday, February 4, 2018. Go Birds.

On loop in my head as I looked toward City Hall from the Ben Franklin Parkway, which will serve as the terminus of the biggest party in Philadelphia history, was this:

The moral of this story is that Philly believes in itself.

Philadelphia, or at least those Philadelphians who don't spurn active engagement in lieu of snarky dismissal, was compelled to do so by a group of decent human beings who just happen to earn a living in a world of violence.

That is what I'll take away from a 2017-18 Philadelphia Eagles organization that did something none of its peers in the Super Bowl-era was able to accomplish, and in the most dramatic of fashions, no less.

Hyperbole alert: The Eagles fought, and won, for the righteous and vanquished a team with loose-at-best competitive morals. That they stormed the field to a Meek Mill track is the stuff of woke legend. (I guess the unedited lyrics in the Tweet below warrant a NSFW warning).

The Eagles celebrated to Meek Mill after winning the Super Bowl!

Just take a look around. Chests are puffed out. Smiles are wider. Confidence meters are through the roof. These impacts were self-evident even before the Patriots won the coin toss and deferred.

Throughout the game, when nerves and blood pressures were rising, friends drunkenly turned to me for consolation. They knew that I knew what they were feeling courtesy of having been a long-suffering Cubs fan who finally, for lack of a better analogy, climaxed in 2016.

What I told them – when voices were able to be heard above the joyous screams – was that this feeling will always endure.

When you wait so long for something like this to happen, and it finally does, it leaves an indelible mark.

The world doesn't seem as, I don't know, heavy. Angst dissipates. The "how will they disappoint us this year" fears disappear forever.

If you're anything like me, diehard Eagles fans, you'll now be able to brush off annoyances ranging from petty to moderate with a shrug of the shoulders and a simple, "Whatever. The Eagles won the Super Bowl."

A lot of times, athletes spout clichés and agent-approved messaging to build their brand and profit margins.

This team isn't that.

This team is real af, just like the city it said it won a championship for – and meant it.

It's a special time to be alive in Philadelphia, folks. Savor these moments. You'll want to hold tight to this new local spirit till the end of your days.