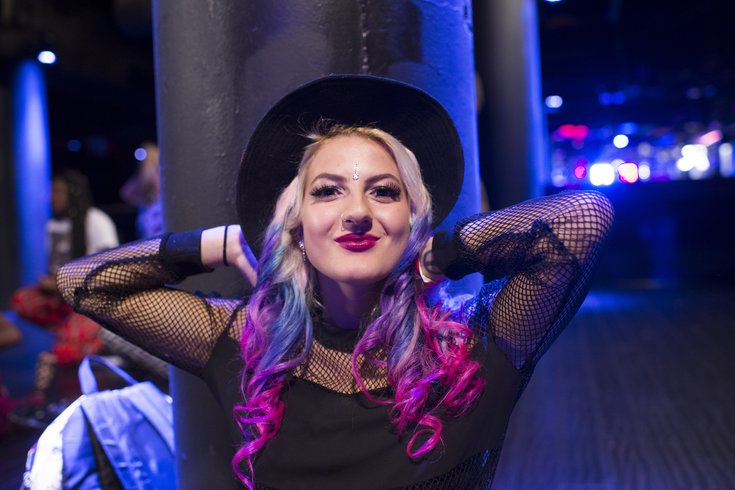 Photo of "Dancin on Air" star/Courtesy of Fuse

Tina DeCara pondered whether "Dancin' on Air" co-star Rogelio Gonzalez is someone she'd date on this week's episode of "Saturday Morning Fever."

As stage setting imagery goes, two things of note occurred in the opening moments of this week’s episode of “Saturday Morning Fever.”

First, we have hostess Casey Reed shaking her dang head because the “Dancin’ on Air” taping started without her. (How you gonna go and have a dance show without the host on stage?!) Then, we see Ro-Ro-Rogelio Gonzalez buried deep in the crowd while prance-pining for his (possibly lip-syncing?) crush Tina DiCara. (Sad face emoji.)

These images foreshadow an episode centered on Casey’s conversations about sex and sperm donation with her bride-to-be (and so-Philly mother!) and Ro-Ro-Rogelio getting ensnared in a flirtation controversy amongst a trio of the show’s lady stars. Because of course it does.

Let’s get onto the nitty gritty of a reality show about dancing that casts dancing aside in the name of familial character development.

Ro-Ro-Rogelio’s talking like he’s going to level-up attempted-dating-wise with Tina, who’s shown unlacing his gnarled-up sneakers on a dressing-room couch. With an awkward hug, finger points and click-click oral sound effect, she seemingly friend zones a would-be suitor about whom she later begrudgingly tells her mother she’d consider dating.

Oddly enough, that scene’s more awkward than Casey transitioning from packing apocalypse-preparedness bags into a chat with Brittany that went a little something like this:

Casey: "Hey girl, you know how we were talking about using an online sperm donor for our in vitro fertilization needs?"

Casey: "Well, I’ve been thinking about that, and this dude 'Rafe' who works at the radio station might be perfect for our insemination needs."

Casey: "Yeah, yeah, I know, but I’ve worked with him for, like, a decade, and we should totally all get together sometime, k?"

Brittany: "Uh, chatting about sperm donation over a drink or dinner? Awkward much?"

This segues into motherly intervention time amid dueling plotlines.

From the Ro-Ro and Tina storyline, the latter is shown with her mother Corinne (a one-time singer herself) as they prepare for their multi-hour drive back to Long Island.

As he is wont to do, Ro calls her, thus delaying the DeCara family’s exodus prepwork. Mama Corinne – who totally digs Ro’s respectful nature – helps her daughter rush the suitor off the phone.

Nope. This is not going well for poor Ro-Ro. Not. At. All.

From the Casey and Brittany standpoint – after an exterior shot of Midvale and Ridge in East Falls (Woot! Woot!) – we meet Casey’s mama Harriet at a Manayunk restaurant called The Goat’s Beard.

Harriet launches into a diatribe about how her daughter doesn’t call as much as she should when she's asked about potential baby-sitting availability. In fact, she’s so out of the loop that the chat about sperm-donation nuances occurs while food is being ingested.

Quick cut: Back to Ro-Ro, who's playing video games with his brother Eddie at their mother’s house. Eddie pretends he’s never heard Ro-Ro mention Tina before – lol yeah right – so Ro-Ro shows off a mobile phone picture. Then, Ro-Ro again calls a beautiful lady who’s scarfing down Herr’s Baked Cheese Curls at work. Product remnants, as they are wont to do, coat her fingers. (Small price to pay for snack-food paradise.)

Quick cut: Brittany’s driving with Casey along what appears to be the Schuylkill Expressway. Casey’s about to hit her with some unexpected news: SURPRISE! We aren’t going to dinner by ourselves; we’re going to dinner with that dude Rafe, the one whose sperm might be involved in making our in vitro baby! Ya cool? Naw, Casey. Naw.

Brittany’s all, like, are you for real? Couldn’t we have eased into this conversation instead of ambushing me at Manayunk Brewing Company?

Britt’s right: This is some weak sauce.

Things go off the rails when Rafe – a Temple guy who’s in the muy awkward position of talking about sperm generosity before a co-worker, her bride-to-be and the audience of a show seen by a limited cable audience – mentions the touch of alcoholism a couple steps back in his bloodline. Ah, whatevs.

“My dad’s an alcoholic. It’s gonna happen,” interjects Casey, who will later reach a let’s-investigate-further-options compromise with her mate involving leftover chicken tenders at home.

Ro-Ro, however, would not be so lucky.

"Dancin’ on Air" contestant DeAnna is all hand-atop-leg up on the dancing fool. She’s flirty, in an Ariel from “Footloose” way. When Ro-Ro heads over to talk to Tina, DeAnna pounces with a, “You’re cheating on me!” declaration followed up with the notation that Ro-Ro told her the other day that he “was going to bite my neck” the other week.

This is all Marissa Rivera – Tina’s backup dancer with ‘tude – needs to further drive a wedge between Ro-Ro’s designs on her friend Tina, who deserves more than a “30-year-old person in a 12-year-old’s body.”

Anyway, Tina buys into this and pulls the “I thought we had something, but I guess not.”

It’s difficult to tell whether this is a wink-nod sitch when the episode comes to a close. A reality show hunch says yes as the conversation seems a wee bit manufactured.

We’ll have to wait at least a week to find out, though, since that’s where episode three comes to a merciful end.

Missed the episode? Watch it below! My favorite episode so far hehe https://t.co/hdCDJAu7AT #SMFonFuse