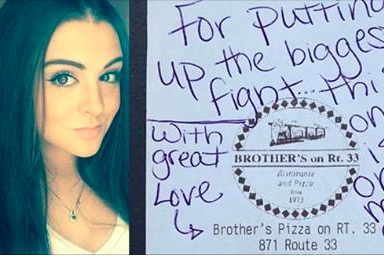 Brother's Pizzeria waitress Daniela Bossi, 19, covered the tab of family friends Rick and Annette Lewallan. "For putting up the biggest fight, this one is on me," Bossi wrote to Rick, who is battling brain cancer.

More often than not, when restaurant bills capture our attention, it's for all of the wrong reasons. At Brother's Pizza on Route 33 in Hamilton, New Jersey, however, a young waitress made a gesture Thursday night that helped shine light on the kinder side of humanity.

Notre Dame High School senior Daniela Bossi served the table of longtime family friends Annette and Rick Lewallen. The couple rarely has the opportunity to dine out, as Rick continues to battle brain cancer and the cost of his treatments has been climbing, NJ.com reports.

Treating themselves, Rick ordered a salad and Annette got a slice of pizza. When it came time to pay the bill, however, Bossi, 17, returned to the table with a special note.

"For putting up the biggest fight, this one is on me," it read. "With great love, Brother's Pizza."

Bossi, who has known the Lewallens for years, covered the bill with tips she made during the course of the night. She has been employed at Brother's for two months, and when she told her bosses, they offered their full support and reimbursed her.

Rick's battle with brain cancer has continued since April and he was recently selected for a clinical study of an experimental treatment by Memorial Sloan-Kettering Cancer Center in New York City. Normally reserved, Annette said that Rick became emotional. On Facebook, she addressed Bossi's kindness, saying the world is a better place because of people like her.