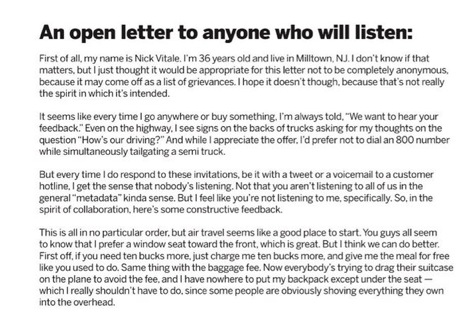 Nick Vitale, of Milltown, New Jersey, was a clever device used by an advertiser to capture an audience in the Wall Street Journal and beyond.

An aggrieved consumer from Milltown, New Jersey, took the internet by storm on Thursday with a full-page ad in the print edition of the Wall Street Journal, politely telling America's captains of industry what we all find pretty annoying about their products.

A photo of the letter, purportedly written by a guy named Nick Vitale, circulated on Twitter. It's good for a few knowing chuckles.

Some guy took out a full page ad in the WSJ to air a bunch of minor, unoriginal consumer grievances. And I kinda dig it pic.twitter.com/CLtUEtmbFY

"On the subject of cheeseburgers, I am generally pleased with the product and service I have received," Vitale wrote. "However, it would be great if you guys could slice both the lettuce and tomato much thinner, so they don’t slide out of the bun when I bite into it. It’s a little thing, but one that I think would dramatically improve the overall experience."

But one brief paragraph was a little suspicious.

"Gas stations, I really appreciate that some of you have started putting hand sanitizer dispensers by the pump," Vitale wrote. "What’s taking the rest of you so long?"

As we all know, Nick Vitale from Milltown would not be pumping his own gas in New Jersey.

The whole thing was part of a two-page advertisement from enterprise software brand SAP, according to AdWeek. The second page featured a playful response from the company, whose North American headquarters are in Newtown Square, Delaware County.

A full-page ad in the Wall Street Journal would cost approximately $250,000. A guy like Nick is not going to pay that much to complain about what he's paying for elsewhere.

It doesn't seem to matter that Vitale is a fictional character. His words appear to have resonated with the American consumer.

To: Nick Vitale from Milltown, NJ.

Your open letter to the @WSJ was not a list of #grievances. It was, in fact, the thoughts of many American consumers. Thank you.
I stand w/Nick Vitale from Milltown, NJ.

Idk who Nick Vitale is, but I respect him and he is literally George Costanza in 2019 #wsj pic.twitter.com/IvcuQRaez4

Kinda sad this is apparently just a marketing campaign, because the second sentence mentions that “Nick Vitale” is 36 years old, and therefore eligible to be President. If we’re going to be having celebrities and billionaires running for POTUS, I’d prefer this guy instead. 🤷🏻‍♀️ https://t.co/hK7VLi7Iyh

We are all Nick Vitale