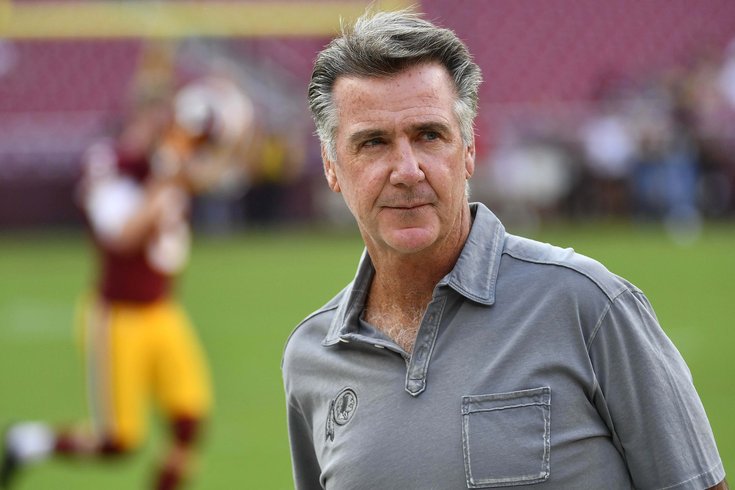 "I'll take the ceramic dalmatian for 600, give me the one free week of maid service, and, uh, I'll take the hat rack."

If you're an Eagles fan, the rebuttal is as simple as, "How about your front office?"

The future of the NFC East will be dramatically shaped by the longterm results of the 2019 NFL draft, which saw the Giants take Duke quarterback Daniel Jones at sixth overall and the Redskins grab Ohio State's Dwayne Haskins at 15th overall.

For the past week, Giants GM Dave Gettleman has been busy defending the Jones pick, which many analysts felt was an incredible reach for a player some thought wouldn't get chosen in the first round, let alone by the Giants' second pick at 17th overall.

Gettleman explained that he knew "for a fact" that two other teams — later identified as Washington and Denver — would have taken Jones if the Giants hadn't acted swiftly.

"We picked the player we wanted to pick," Allen said on NFL Network's "Total Access." "I'm almost positive Dave has no clue what our draft board would be. I don't know which draft boards he knows, but he doesn't know ours."

Gettleman has defended himself by pointing to his track record of success with other NFL teams. The only person to publicly back his assertion about Jones' draft stock is — big surprise — Duke coach David Cutcliffe.

“I know things that I can’t reveal, but (Jones) would’ve gone well before (the 17th pick),” Cutcliffe said on Sirius XM. “There were people that quietly had their hearts set on him.”

Jones and Haskins could both turn out to be great players for New York and Washington. They could also flame out or end up somewhere in the middle. Their respective teams, however, will always be linked and compared based on Gettleman's word against Allen's.

As an Eagles fan, this is a reminder to be grateful for Howie Roseman and Joe Douglas. Not every draft pick pans out, but it's nice to have execs who don't manage to look foolish long before the verdict is in on their players.