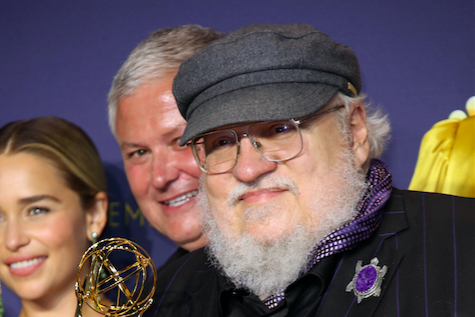 George R.R. Martin, the mind behind HBO's "Game of Thrones," ripped the New York Giants for their selection of quarterback Daniel Jones in the first round of the 2019 NFL draft.

Most of this week's discussion about "Game of Thrones" will center on the epic Battle of Winterfell as the HBO series nears the end of its final season.

Other important matters are on the mind of George R.R. Martin, the author and mastermind behind "A Song of Ice and Fire."

Martin, 70, is a massive fan of New York sports with rooting interests in both the Jets and the Giants. He even named a character after former Giants quarterback Phil Simms.

The giant Wun Wun was named by George R.R. Martin after Phil Simms (#11), a quarterback of his favorite team, The Giants. #GameofThrones pic.twitter.com/LufGaSOvWf

Daniel Jones from Duke at number six? Yes, they need a young quarterback to groom as Eli’s successor. But Dwayne Haskins was right there. Why not him? I don’t follow college ball, but by every measurable Haskins is way better than Jones. Jones threw 52 TDs in three years at Duke, Haskins threw 50 in one year at Ohio State. Within fewer interceptions. Against much tougher opposition. Dave Gettleman must have seen something in Jones that no one else could see. But even if you accept that, taking him at six seems insane. He would have been there at 17.

Martin previously was critical of the Giants' trade of star wideout Odell Beckham Jr. to the Cleveland Browns, which netted them their second first-round pick at no. 17. That blog from March was titled, "Kill Me Now."

Gettleman has spent the last several days in optimistic damage control, claiming he knew "for a fact" that two other teams were going to pick Jones if the Giants hadn't pounced at No. 6. He has effectively hitched his professional reputation to whether Jones can take New York back to the "promised land" in the coming years.

Martin also criticized the Giants' selection of Clemson defensive tackle Dexter Lawrence at No. 17, but praised the team for acquiring Georgia cornerback DeAndre Baker at the end of the first round.

The Giants' rough weekend continued Saturday after their sixth round pick, cornerback Corey Ballantine, was injured in a shooting near Washburn University in Topeka, Kansas. His former teammate, 23-year-old Dwane Simmons, was killed in the shooting.