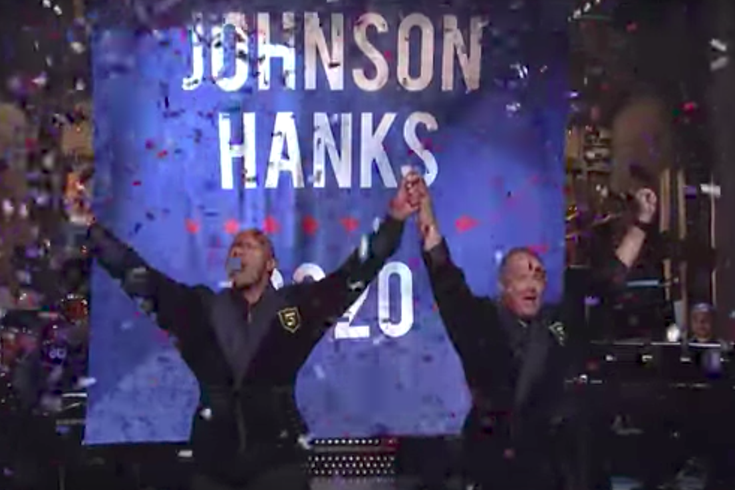 If you thought last year's run up to the presidential election was entertaining, the next one could feature even more star power.

The "Saturday Night Live" cast and crew wrapped up the show's 42nd season this weekend with the help of guest host Dwayne "The Rock" Johnson, musical guest Katy Perry and other surprise appearances.

Johnson's gig was a momentous one as soon as he stepped foot on stage for the opening monologue. This was Johnson's fifth time hosting, which meant he was welcomed into 'SNL's Five-Timers club.

Alec Baldwin, who has been a constant presence all season for his bumbling portrayal of President Donald Trump, joined Johnson on stage to commemorate the occasion. The sight of Baldwin reminded Johnson about speculation over a future presidential run following a recent interview with GQ. Johnson told the outlet it is "a real possibility."

Well, Johnson addressed the matter directly. "Tonight, I want to put this to rest and just say once and for all. I'm in. Starting tonight, I'm running for the presidency of the United States," he announced to cheers.

Johnson already has a running mate too: fellow Five-Timer member Tom Hanks. "I could not possibly...turn this down. I'm in!" Hanks exclaimed.

The pair quickly highlighted why voters would be happy to vote for the unconventional ticket.

"I would get the senior vote because I fought in World War II in like 10 different movies," Hanks explained.

"I, of course, would get the minority vote because everyone just assumes that I'm whatever they are," Johnson said.

After revealing the partnership wasn't real, Johnson and Hanks became convinced it could work and dropped a "Johnson Hanks 2020" banner with red, white and blue confetti as "Hail to the Chief" played.