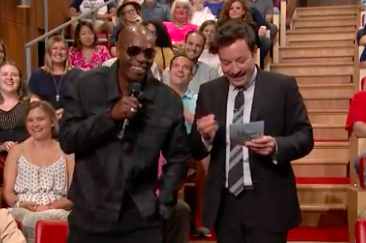 For years now, The Roots' big leap into late night television has consistently proven that the Philadelphia hip-hop legends, always known as a serious and socially conscious group, also have a brilliant sense of humor to play against the wiles of Jimmy Fallon every night.

We've been treated to one-sided "Family Feud" skits and an authentic rendering of the "Super Mario Bros." theme song, but last Thursday's audience was in for a special treat when comedian Dave Chappelle appeared as a surprise guest for The Roots' regular "Freestylin" skit.

Typically, Fallon approaches random members of the audience to conduct brief interviews about their personalities and hobbies. On a moment's notice, The Roots have to spin these tidbits into a Mad Libs-style jingle.

On Thursday night's show, after a Beach Boys-style tune for audience member Sarah, Fallon needlessly squeezed through an aisle and down to the front row to chat with a familiar man named Dave. The audience immediately caught on that it was Chappelle, the resurgent comedian who returned to form recently with a pair of Netflix stand-up specials.

Chappelle is less than a month away from kicking off a residency at Radio City Music Hall, where he'll be joined by a rotating cast of comedians and musical guests. The Roots will perform in New York with Chappelle on August 2.