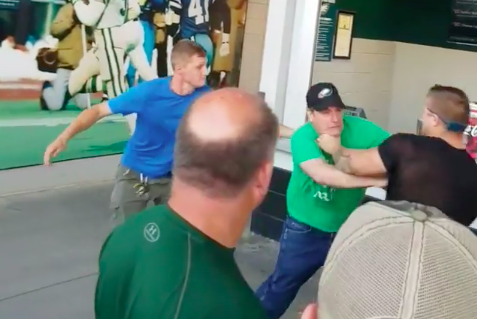 As the Eagles and Bills met in a preseason matchup last Thursday night, a few fans at Lincoln Financial Field apparently fought over spilled crab fries on the concourse. Because of course they did.

Week 3 of the NFL preseason gets underway Thursday, but some fans were in midseason form last week when the Eagles hosted the Bills Thursday at Lincoln Financial Field.

A brief video shared on Instagram by Keith Dotegowski that night shows a scuffle breaking out between three people outside a Chickie's and Pete's stand on the concourse.

The fight appeared to start over a cup of spilled crab fries.

A man in a green "Delco Irish" T-shirt is shown exchanging words with two others. The man then slapped one of the other two, sparking the two-on-one fisticuffs.

The video also shows a young man in a Carson Wentz jersey smiling at the camera and then looking on as the action started. (Leave it to Eagles fans, of course, to fight in front of a kid.)

A commenter on the Instagram post said he was the young fan in the video, and he went on to break down what happened.

"But right after this video ended the guy in green got knocked out by the guy in blue," he said in a follow-up comment.

Dotegowski later posted an update on the post, in which he said the fight ended soon after the video cut out. After taking a few more punches, the man in the green ran away as security made its way over, he said.

"After I got my fries and beer I found blue shirt [and] asked how his face felt. [He] said he's drunk so he don't feel it," Dotegowski wrote, "but he's cool with green shirt now and smoked a cig with him."