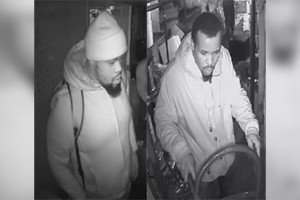 The Philadelphia Police are seeking help to identify these two men, who police said, robbed 4 Fathers Bar & Grill in Old City on Dec. 22.

The Philadelphia Police Department is seeking the public's help identifying two men who robbed an Old City bar on Tuesday.

Police said the men can be seen on surveillance video entering 4 Fathers Bar & Grill after breaking the side door window with a brick.

The suspects took two small safes containing about $1,400 and unsuccessfully attempted to open the cash register before fleeing on foot thru the rear driveway, police said.

Police described the men as black or Hispanic and about 20 to 30 years old. One man, police said, stands about 5-foot-10 and weighs between 210 and 240 pounds. He has tattoos on his neck and was wearing a puffy jacket at the time of the incident.

The second is between 5-foot-8 and 5-foot-10. He weighs in the neighborhood of 150 and 170 pounds. He has a goatee and was wearing a hooded jacket during the robbery, police said.

Anyone with information about this incident or either of these suspects is urged to call Philadelphia police at 215-686-8477 or text a tip to 773847.