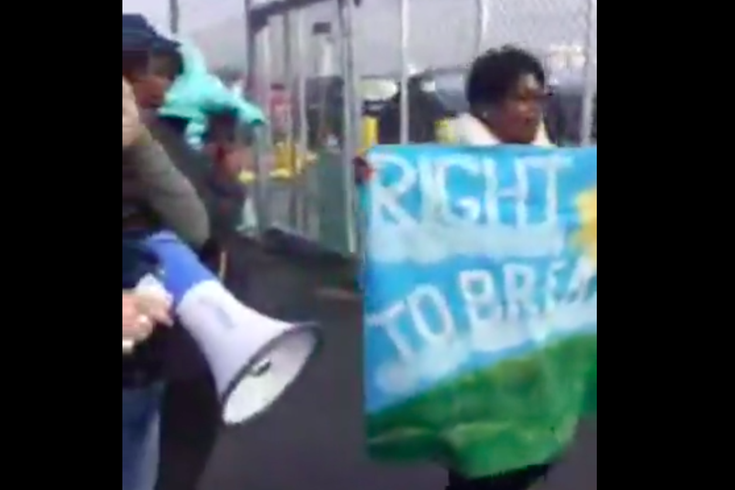 Protesters demonstrate outside an oil refinery in South Philadelphia on Monday, Dec. 12, after a fire broke out at the plant over the weekend.

A small group of protesters demonstrated outside an oil refinery in South Philadelphia Monday afternoon after an explosion occurred at the plant over the weekend.

The demonstrators from Philly Thrive, a local environmental group, came out in response to a fire that broke out at the Philadelphia Energy Solutions (PES) refinery at 3144 W. Passyunk Ave. late Saturday night.

Meredith Nutting posted a video of the protest to Facebook. Philly Thrive claimed the gathering blocked truck traffic going in and out of the refinery for half an hour.

The group claimed local residents were given little information about the fire Saturday night. Per a press release:

The protest is in response to a fire outbreak inside the refinery complex on Saturday night. Residents were given no notice [or] explanation for the fire, which burned for over an hour. The protesters are demanding increased transparency from PES around ongoing health and safety concerns at the refinery.

The 1,300-acre site lies immediately west of Wilson Park, a community in South Philadelphia whose residents are predominantly black and low income. Several fires have broken out in the past year alone at the refinery.

According to media reports, a heater malfunctioned inside the refinery around 11 p.m., exploding and causing the fire. Crews were able to bring the flames under control within minutes, said Cherice Corley, a spokesperson for the refinery.

"There is no cause for concern for employees or members of the community," Corley told NBC10.

According to the company's website, the refinery is the largest on the U.S. Eastern Seaboard, processing about 335,000 barrels of crude oil per day.

Earlier this year, protesters gathered outside the refinery to oppose a proposed expansion into the Southport neighborhood near the Navy Yard. The Philadelphia Regional Port Authority is expected to decide on whether PES or one of five other bidders will get to develop the 194-acre site by the end of the year.