On Day 34 of the #OccupyPHA protest, they took it to the streets and drivers weren't happy 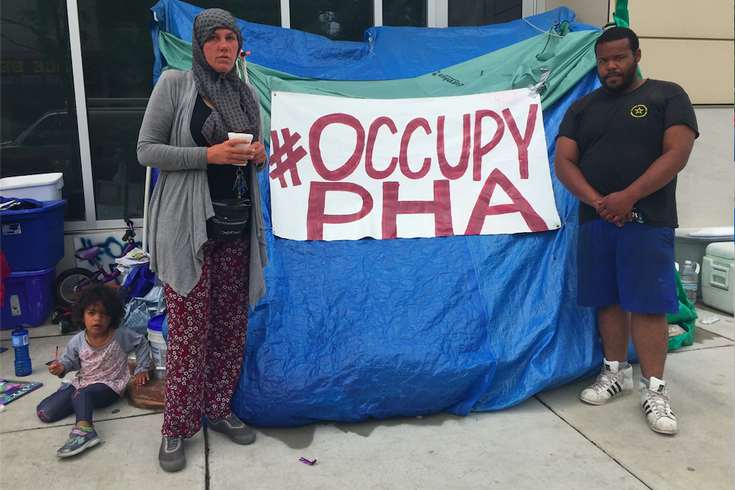 Jennifer Bennetch and Fredo Trice on Day 38 of their #OccupyPHA protest outside the Ridge Avenue headquarters of the Philadelphia Housing Authority.

On the 34th day of her #OccupyPHA protest outside the public-housing authority’s North Philadelphia headquarters, Jennifer Bennetch and those who support her mission decided the time was right to escalate.

Bennetch – a 33-year-old married mother of three whose North Philadelphia home was badly damaged by a fire in March – has been encamped outside of the PHA offices at 2013 Ridge Avenue since April 22.

On Tuesday afternoon, Bennetch said there have been countless instances of pushback from PHA, much of which she chalks up to her years-long effort of attending every board meeting, questioning the authority’s push toward what she considers gentrification through, in some cases, the use of eminent domain.

At 2 p.m. Friday, she and more than a dozen supporters decided it was time to step away from the tents (containing mattresses), chairs, tables and signs near the building’s entrance.

The plan? Protest in the street to get people to take more notice of their message.

The result? Despite Philadelphia Police ultimately blocking off the block to vehicular traffic, the protesters found themselves avoiding a front-end loader that barreled its way down the block as annoyed drivers suddenly found themselves in a traffic jam. One heated driver even appeared to be threatening protestors with a metal pipe.

The video embedded below offers a clear shot of the vehicle’s license plate and a close-up of the yet-identified driver who says, with a flick of the hand, “C’mon, get out of the way” before backing back down the block.

One tweet from the scene tagged Mayor Jim Kenney, PHA President and CEO Kelvin Jeremiah and Philadelphia Police in an effort to prompt an investigation.

When contacted for comment on Tuesday, a spokesman for Mayor Kenney referred questions to the police public-affairs office. Police said they “have no reports for the incident you’re inquiring about,” but urged the victims to file one.

For her part, Nichole L. Tillman – PHA’s executive vice president of communications – confirmed that the incident occurred in front of the headquarters, but that “PHA does not own or employ the bulldozer operator and played no role in what appears to be an altercation.”

Tillman also noted that "this small protest by people who are not residents of this area should not overshadow PHA's work in this community."

Four days removed from those heated moments – which people there said also involved several cars bumping into protesters in the middle of the street – Bennetch isn’t inclined to buy into the stance that PHA “played no role” in the incident.

That's because she’s had uncomfortable run-ins with PHA officials, including Jeremiah, both during the weeks of her protest, and in the months and years prior, she said.

She doesn’t have hard proof confirming many of her suspicions, but lays out a circumstantial case which holds that the bad blood runs in both directions. Bolstering her stance that PHA doesn’t do right by its tenants are countless passersby who offered grievances of their own. 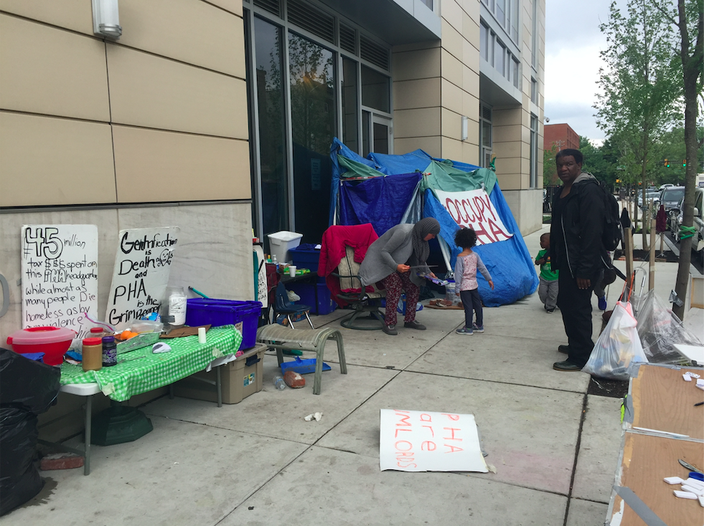 On Friday, the OccupyPHA protesters ventured out into the street to get more attention for their cause, and nearly got run over by a front-end loader and several cars.

She said she’s concerned about a PHA Police Department that cruises around the area in vehicles resembling those used by city police, the agency’s penchant for moving residents out of areas in what looks like gentrification and how there isn’t an independent advisory board that could have some say in PHA matters.

“I started with this activism in 2016 and have been harassed by officers in that private police force,” she claimed, noting that since they're private homeowners, PHA has no jurisdiction at her family's home. “PHA spends so much money on everything except housing people.”

It was around then that she started regularly attending PHA’s board meetings, which are held at 3 p.m. on the third Thursday of each month. Instead of collaboration, she said she's seen condescension from the board.

One of those meetings was held the day after a fire damaged her family’s nearby home on North 19th Street. Raising her suspicions about the fire was the fact that her husband had been engaged in civil litigation against PHA.

She said a fire official at the scene told her that it was likely arson, as the fire escalated at twice the rate it normally does, and that instead of spreading inward, the flames crept outside in a fashion indicating an accelerant was used.

The official Fire Department report states that a call came in at 10:40 a.m. on March 20 for a living room fire. Three minutes later, the first engines arrived and found a heavy fire at the property. It was placed under control 13 minutes after the call came in, and the Fire Marshall's Office determined it was an accidental fire caused by an open flame, according to a Fire Department spokesperson.

However, when she got a report about the blaze, it blamed her children for unintentionally sparking it “playing with newspapers or magazines, which I don’t have in the house,” Bennetch said.

At that March 21 meeting, she brought video of a PHA police officer – with whom she claimed a long record of feuding – to show the board. (She showed video of that officer to a reporter on Tuesday, and said she was suspicious because he was the first to respond to the fire call.)

The next month, they cut her off because they said she approached them too aggressively. There were threats of banning her from future meetings, she claimed.

“That’s when I said I’m going to occupy PHA since they threatened to stop me from coming to the meetings,” she said.

After her family’s four-week stay at a home arranged by the American Red Cross, her husband and three children – ages 4, 6 and 16 – went to live with friends. Bennetch and her best friend Fredo Trice set up shop outside PHA.

“When she asked ‘Do you want to occupy PHA,’ I said f*** yes,” said Trice, who has been there each day for the past several weeks.

During her stay, she’s dealt with people calling the Department of Human Services claiming she had her children sleeping outside in a tent. 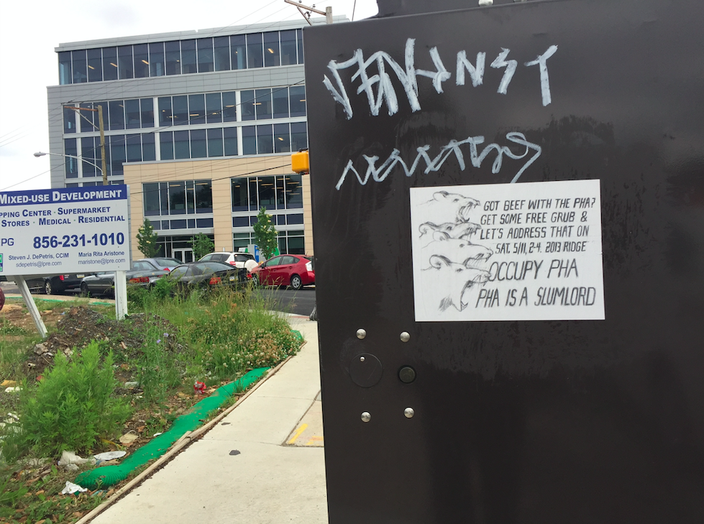 There's been a bunch of bad-blood dustups between PHA officials and the OccupyPHA protesters.

Then, she said, city Homeless Outreach vans showed up last week, claiming they’d received calls about them, and urging Trice to go to the Covenant House in Germantown for shelter.

Those incidents, and others like them, led to the idea for the street protest last week.

“Sleeping in front of the building wasn’t enough,” Bennetch said. “We wanted to let people see why we’re here.”

The protest led to traffic delays on the Friday before a holiday weekend.

Several profane confrontations, and protesters getting brushed by vehicles trying to pass by along Ridge Avenue, can be seen during this 56-minute video of the protest.

One woman got out of a truck wielding a metal pipe with officers looking on. She quickly rethought that position when an officer approached her and quelled a potentially dangerous situation without any arrests or charges being filed.

In addition to the front-end loader, Trice estimates that about six cars bumped into him during the hour-long protest from which no injuries were reported. (These incidents occurred before police blocked Ridge off at Jefferson and Master streets.)

She also claimed that someone who may or may not work for PHA – but was standing in the doorway of the headquarters – was “telling cars to run us over.”

“We expected some angry people, but telling drivers to run us over? That’s ridiculous,” she said.

Joe Cox, who is running for a City Council at-large spot, was on hand for Friday’s incidents.

“This was not my first protest, but typically, you don’t have several people trying to run into you,” he said. “They really wanted to keep going at us. When the lady got out of the car with a pole, the cop there just looked at her, like, ‘really?’ It was pretty crazy.

“I was blocking traffic while holding one of my dogs and had another dog in the basket. One car kept edging up, almost hitting it.”

Bennetch has had a meeting with Jeremiah, the head of PHA who told a local newspaper earlier this month that, “I think they do not have the information that they can reasonably rely on to make the determinations that they have made.”

Tillman also addressed Bennetch's specific claims, tempered with a worry that they might take away  from PHA's progress in the area.

"First and foremost, we are very proud of the investments we are making and the progress we have already made toward addressing the massive and pressing social, economic and housing needs of the Sharswood neighborhood, a community that had been neglected for more than 50 years," she said of the area where Bennetch lives. "Unfortunately, the two to five people camped outside our headquarters building have been promulgating entirely inaccurate information."

She also questioned why the OccupyPHA protesters have "refused to participate with any of the community-based organizations that have guided PHA in our planning of the Sharswood neighborhood transformation."

"We have met with the protest leader and encouraged her to work with the community regarding her concerns," Tillman added. "We hope at some point she will take advantage of that opportunity."

As to the claims of PHA police harassment, the agency "has yet to receive any evidence to support her claims. PHA has no tolerance for harassment or retaliation by its employees and takes these kinds of allegations very seriously," according to Tillman. "PHA encouraged her to cooperate with our investigators and produce any evidence that supports her claims. We told her if she believes she is being harassed she should contact the Philadelphia Police Department or dial 911."

Regarding the lawsuit that Bennetch referenced – which focuses on claims of harassment – Tillman said it was dismissed in 2016 but recently refiled and is pending in court. Bennetch responded that "it's not a refiling, but a new suit based on a set of facts that occurred after the 2016 suit."

The PHA took a different view of confrontations at board meetings, claiming that Bennetch "threatened to burn down PHA's President's personal house" in the wake of the March blaze.

"Her child had caused a fire in her home and she claimed that PHA 'firebombed' her house. It was after her outburst at our Board Meeting in which she rushed the board table that she was informed that threats such as those could get her banned from the Board Meeting," Tillman said. "However, despite her behavior and our advisory she has not been banned and continues to attend our monthly meeting."

The recent uproar did nothing to make Bennetch consider backing off, though. She does have a suspicion that PHA might soon force the issue, however.

This week, signs were posted along windows and doors on the OccupyPHA side of the building. They serve as notification that, “Effective June 3, 9 a.m., construction will begin. Thank you.”

They’ll have to drag her off in cuffs, though, as she doesn’t plan to relent on her mission to force PHA to enact an independent oversight commission for the agency. Her overarching point is that PHA should be responsive, and not dismissive, of residents’ concerns.

“I will not be leaving peacefully,” she said.