The cyclist blocked the bus, stopping rush-hour traffic in Center City for an hour 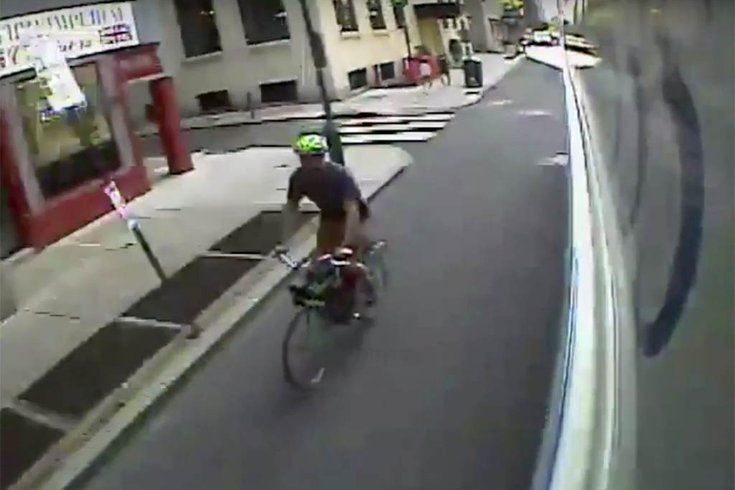 Surveillance video shows a bicyclist riding alongside a SEPTA bus on Locust Street in Center City, just before the man on the bike blocked the bus and caused an hour-long standoff.

SEPTA released the videotape of an hour-long confrontation between an angry bicyclist and the driver of Route 12 bus to PhillyVoice a week after the rush-hour confrontation at 13th and Locust streets in Center City.

The transit agency, which played the video for PhillyVoice last Friday, but declined to initially make the tape available for publication, contends the tape shows the bus driver did nothing wrong.

The scene initially was caught on two cellphone images taken and posted to Facebook by Matthew Kay, a high school teacher in Philadelphia.

Kay wrote in his post: “So this man decided that this septa bus was tailgating him too close as he rode his bike. Proceeded to stand in front of a packed bus for over an hour like 13th and Locust was Tiananmen Square”

A seconds-long video surfaced online the next day, with a Philadelphia police officer who arrived on a Segway saying, “Dude, I just want to go home and see my kid. Move that bike.”

No citations were made and the standoff ended.

The identity of the bike rider remains unknown to officials.

Here's a compilation of footage from surveillance cameras on the bus. SEPTA provided the video, which was edited by PhillyVoice.