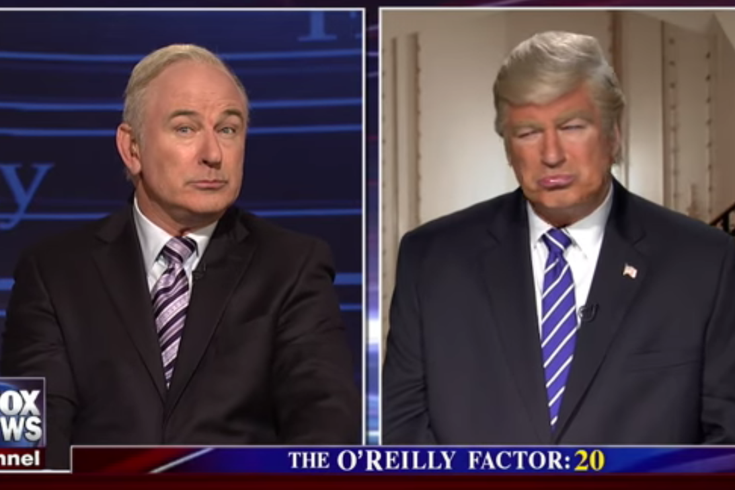 Louis C.K. served as the guest host with musical guest The Chainsmokers, but Baldwin, as he has done most of the season, was the highlight of the show. Baldwin appeared twice as President Donald Trump and debuted a portrayal of Fox News host Bill O’Reilly.

Baldwin pulled double duty as both Trump and O’Reilly during a sketch parodying The O'Reilly Factor.

The show didn't shy away from the embattled host, who is facing multiple sexual harassment allegations. Fox and O’Reilly paid five women $13 million to settle claims of sexual harassment or other inappropriate conduct.

The skit immediately referenced the scandal when Baldwin's O'Reilly greeted viewers about an investigation into misconduct and abuse of power by President Barack Obama's Administration. The host introduced a female reporter to explain the charges, but a producer had to explain that she didn't work for the company anymore.

"Well, did she get the check?" Baldwin's O'Reilly asked before moving on to another female colleague, Malia Zimmerman (Cecily Strong).

"Normally, she's in studio but is now reporting via satellite from exactly 500 yards away," Baldwin's O'Reilly began.

The segment only became more awkward after he inquired about former Obama adviser Susan Rice role in leaking classifying information. Strong's Zimmerman claimed Rice denied the accusation, but Baldwin’s O’Reilly struggled to understand the word "no."

Later in the segment, the host discussed the allegations against him and brought in the president as support. Both O’Reilly and Trump were played by Baldwin.

Trump, as he is wont to do, cited no evidence to back his claims and acknowledged his defense of O’Reilly was based upon "a hunch, just a loose hunch."

The exchange set up the most cringeworthy moment between the two when O’Reilly praised Trump for promoting sexual assault awareness month.

"It's a subject near and dear to my hand," Trump said, prompting audible groans from the live studio audience.

The show's cold open featured Baldwin's Trump visiting a coal mine to address supporters. However, the president refused to engage with their concerns, but instead boasted about his perceived successes in office.