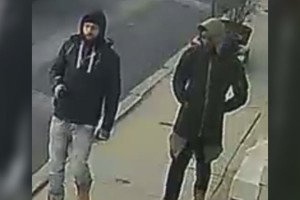 Philadelphia police are seeking help identifying these two men, who they say are sought after a home invasion that occurred in the city's Point Breeze neighborhood on Feb. 14.

Philadelphia police have released surveillance video of two men who investigators said forced their way into a home and beat a woman inside during an early morning robbery in Point Breeze on Valentine's Day.

According to the police, at 8:20 a.m. Sunday, two men knocked on the door of a home on the 1100 block of South Mole Street and told two women inside, one 39 years old and the other 68 years old, that they were there to check pipes in the home.

The 39-year-old woman told the men that the pipes were fine, and the men left, only to return a short time later, police said.

According to police, when the women checked the door this time, the men forced their way into the home and demanded valuables.

Police said that during a struggle with one of the men, the 39-year-old woman was beaten about her face and head with a handgun.

During that incident, one of the men ransacked an upstairs bedroom, and then they both fled in an unknown direction, police said.

The injured woman was transported to Methodist Hospital, where police said she was treated for her injuries.

Law enforcement officials described the first suspect as a black man who is about 5 feet 11 inches to 6 feet tall with a dark complexion, a beard and a thin build and said that this individual was wearing tan boots on the day of the incident and was armed with a black handgun.

The second suspect, police said, is a black man with a stocky build and was wearing a blue puffy vest, dark-colored jeans and tan boots and was also armed with a black handgun on that day.