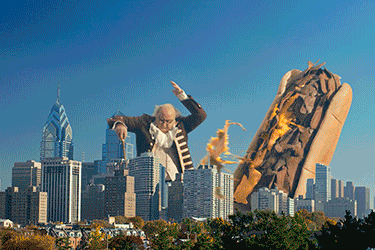 In the City of Brotherly Love, there are some things still worth fighting over – like the title of the city's most iconic legends.

Just ask Ben Franklin and the Philly cheesesteak, two larger-than-life Philadelphia staples who were captured vying for the spot in an epic, Godzilla-like battle over the city skyline.

The scene is the premise of Visit Philadelphia's brand new commercial television and web commercial aimed at highlighting all the city has to offer. (Hint, it's more than the competitors.)

And while there's no proof of who won, let's just say wiz was slung on the city streets.