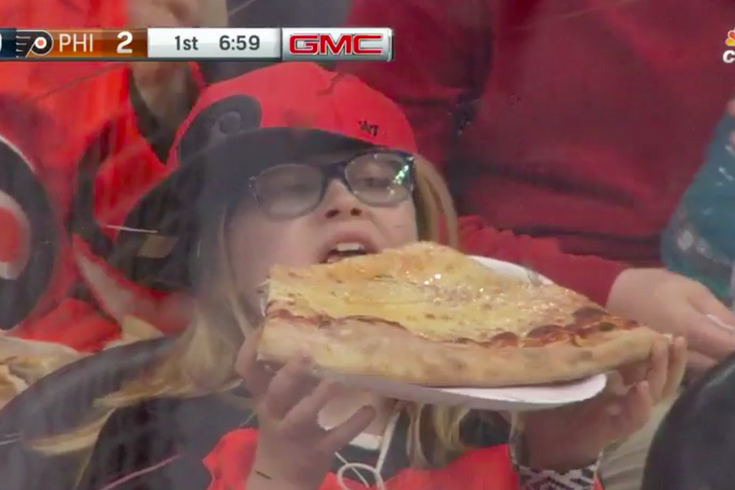 Have you ever wished, if only for a day, to feel the joy of being an innocent child again? To free yourself of the shackles of adulthood and responsibility and just be a kid once more?

If such a wish were granted, it'd probably look something like the young Flyers fan seen devouring a giant slice of pizza, presumably from Lorenzo's in the Wells Fargo Center, on Comcast SportsNet Saturday during the team's 6-0 thumping of the Columbus Blue Jackets.

ALERT: Get a load of this massive slice of pizza.https://t.co/vogWnrXUnu

"Is she going to eat that entire piece of pizza," asks Flyers play-by-play man Jim Jackson. The real question: does it matter? In the mind of the young girl are only two things in that moment: hockey and pizza.

Years from now, the burdens of her grown life -- bills, her job, relationships -- will certainly whisk away that unknowing sense of pure bliss.

Anyone else craving pizza this morning? #Flyers https://t.co/ir81bgQFkg

But for now, take a second to think back to simpler times, when you could sit and watch the Flyers with not a care in the world other than the score and your appetite.

After all, age tends to complicate things, and next thing you know you're throwing your undergarments onto the ice and promising something even more risqué in the future.