We tried it: aerial yoga 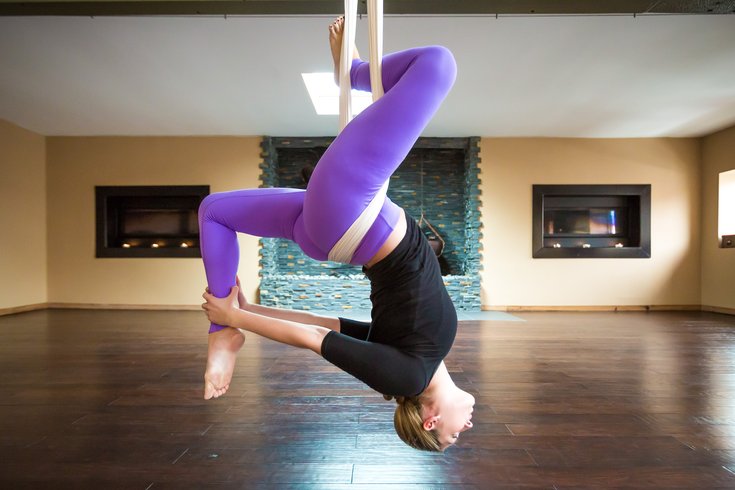 The Gazelle pose offers a deep thigh stretch and a back bend.

Aerial yoga looks intimidating. Thoughts immediately go to Cirque du Soleil maneuvers. Excuses are made that yoga on the ground needs to be fully mastered before yoga in mid-air can be attempted.

Hanging upside down from a silk sling sounded like a cool idea, but I wasn't planning on trying it anytime soon. Then my editor found out about it and immediately sent me off to Amrita Yoga & Wellness in Fishtown (1204 Frankford Ave.), so I could write about it and/or hurt myself.

The studio, which has been around for about six years, is inviting. Each design decision was made with earth, water, air and fire in mind: Lots of wood, a softly gurgling waterfall and muted shades of brown and blue.

Aerial yoga was one of the first classes established when it opened in 2010, enabled by its high ceiling beams.

The soothing spa-like layout must have been working, or maybe having recently completed my first half marathon had gone to my head and I was still on an adrenaline rush, but gripping the white silk sling, I was more excited than nervous.

Since I had never tried aerial yoga before, the silk would potentially feel irritating on my skin as I pushed against it but the next day I would wake with the sensation I had gotten a deep tissue massage. With that payoff in mind, I was completely onboard.

Amrita uses single point slings, meaning both ends of the fabric are connected at the same hook on the ceiling instead of two separate points, making it possible to spin around.

Nero started off our session with a few deep stretching poses, using the ground and the sling. I leaned into the fabric so it was behind my upper back and tucked under my armpits. My first thought: "Yeah, this fabric does not feel soft." It did feel strong, though, and completely capable of holding me up, which was reassuring. 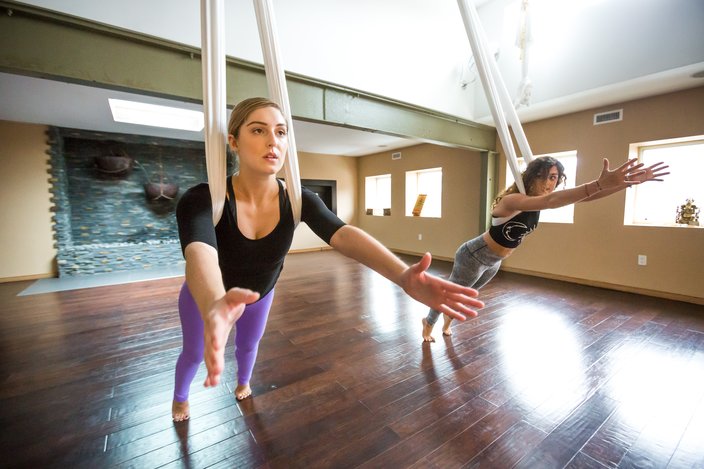 In Plank pose, the focus is on pulling the ribs in and the tailbone down while creating a diagonal plane.

Next was Downward Dog, with the fabric in front of my hips to help stabilize and extend my stretch. Seemed simple enough, but this was the point when I started to get worried. Whatever anxiety I had suppressed initially was now flooding over me.

For as long as I can remember, I've had horribly tight hamstrings. Blame it on competitive running since grade school or blame it on an unwillingness to do the necessary stretches each day, but I've just accepted it.

Keeping my heels flat on the ground, with my legs straight, felt almost impossible. If I couldn't do the one yoga pose everyone knows by name, then how would I ever get my non-flexible body into one of the upside down positions?

Nero must have seen the panic in my eyes because she was quick to note that aerial yoga is actually amazing for runners. Constantly pounding the pavement puts a ton of pressure on the body; aerial yoga takes that pressure off. 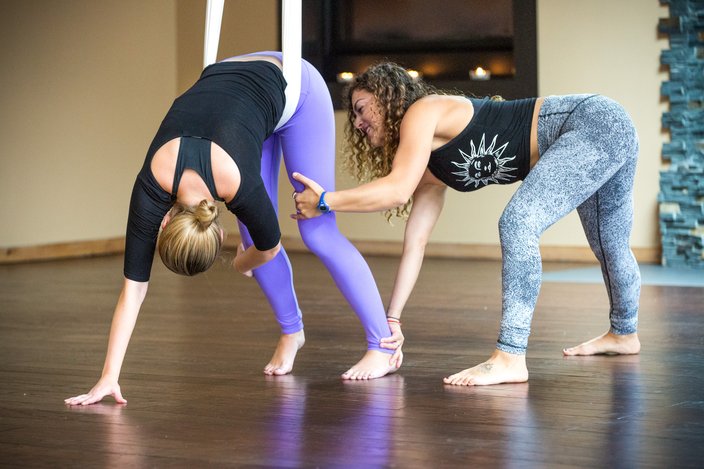 Grounding of the feet helps to create more space within the twist.

We worked through a few more poses, so I could get used to the sling, before she showed me step-by-step how to move into an inversion. By then, I was definitely sweating.

Here's the thing about flipping into an inverted pose: You have to completely trust that you're not going to fall straight down on your head. If your body is positioned correctly in the silk then you'll dangle with your head a foot or so above the floor. 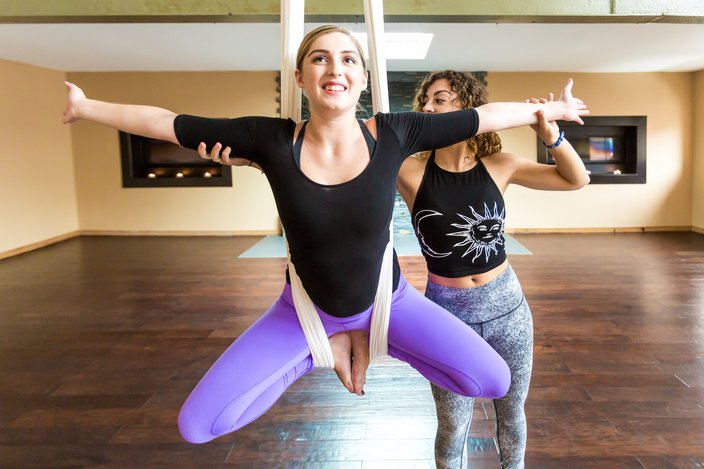 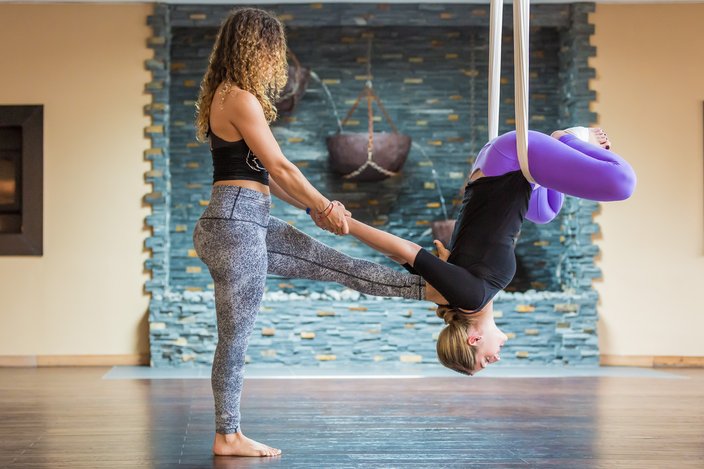 Allowing yourself to fall forward is scary. Then, when you're hanging there or possibly spinning around upside down, you will become disoriented. For first-timers, the rush of blood to the head can be nauseating.

I don't have the strength built up yet to master a handstand pose on the ground, but there I was hanging in an inverted star position, ready to shift into the next pose. What many don't realize is that the support of the silk sling helps with some of the more challenging moves. 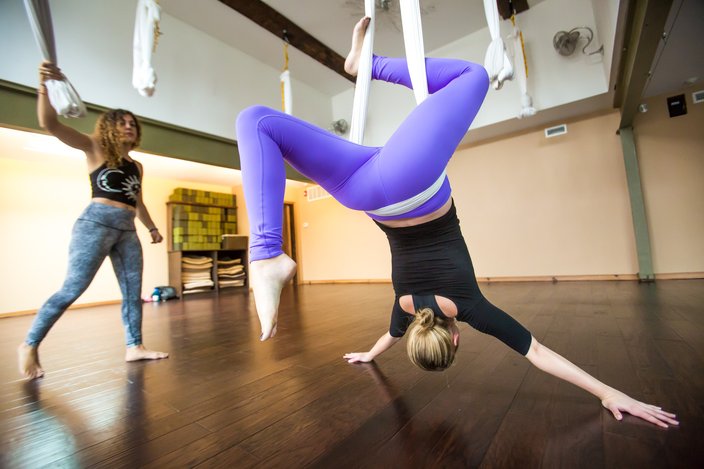 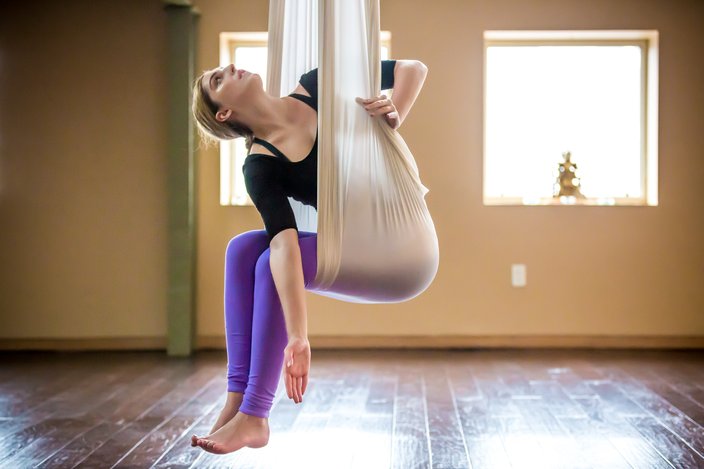 PhillyVoice reporter, Sinead Cummings lifts her gaze to the ceiling in 'Twisted Chair' pose, during a recent lesson at Amrita Yoga in Fishtown.

After that first flip forward, aerial yoga became less intimidating. With the help of a patient instructor, even a newbie can work into an inversion. Once you're upside down, it is both relaxing and liberating hanging there.

That doesn't mean aerial yoga isn't challenging, though. Leg muscles, arm muscles, core muscles will all be engaged over the course of the class. The fabric eases tension and stabilizes, but it can't do all the work.

To get the most out of your workout, you'll need to push against the fabric at times, keep your core tight and deeply stretch. 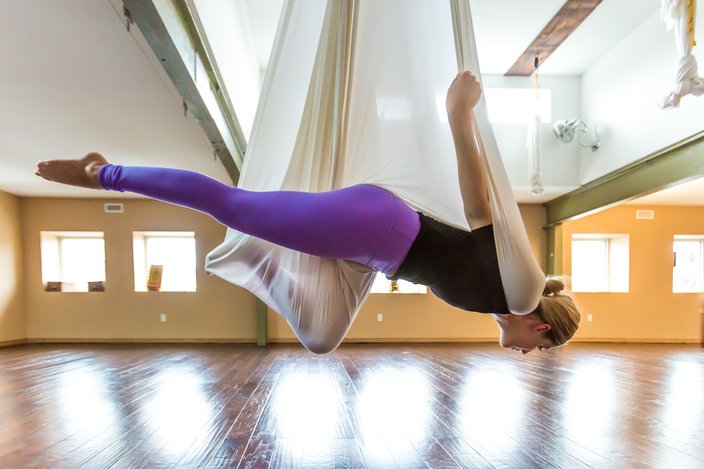 Skin The Cat pose, (as commonly referred to in gymnastics), requires a focus on core and shoulder stability.

At the end of the class, I got to lay in my silk cocoon, sway gently and relax in Savasana, the final pose. I felt lighter, taller and incredibly happy.

Hardly out the studio door and I was already raving about the experience, sending group texts with too many exclamation points. Post-workout endorphins were definitely on high. 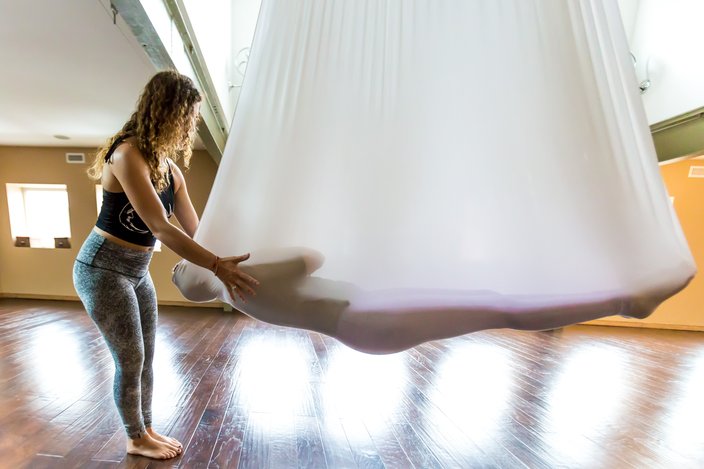 The lesson comes to a close with the final pose, Savasana.

None of my friends were onboard to sign up for classes with me, which was expected (I would have said the same thing before the "We tried it" assignment) but still disappointing.

There seems to be a widespread misconception that aerial yoga is for gymnasts, even though the workout doesn't require any more acrobatic ability than a regular yoga class.

It looks strange to hang from a strip of silk, but it's doable.