Is the centuries-old forecasting method worth its salt? Not likely, but preparedness never hurts 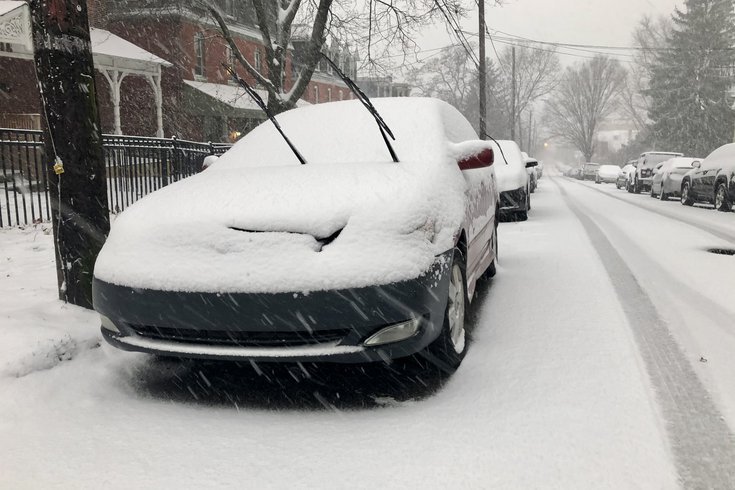 Fresh snow covers a car parked on Sumac Street in Wissahickon during a winter storm in December 2020. The Old Farmer's Almanac predicts the Philadelphia region will have long, cold, snowy winter in 2021-22.

The Delaware Valley has endured a difficult year of storms with unprecedented flooding and tornados in recent months, most recently as the remnants of Hurricane Ida left a path of destruction and claimed several dozen lives across the Mid-Atlantic and Northeast regions.

If the Old Farmer's Almanac is to be believed, the Philadelphia area is in for a trying winter with frigid temperatures and above-average snowfall.

The 230-year-old publication, which is distinct from the Farmer's Almanac, released its 2021-22 winter predictions on Friday with a map showing anticipated seasonal conditions across the United States.

“This coming winter could well be one of the longest and coldest that we’ve seen in years,” said Janice Stillman, editor of The Old Farmer’s Almanac. 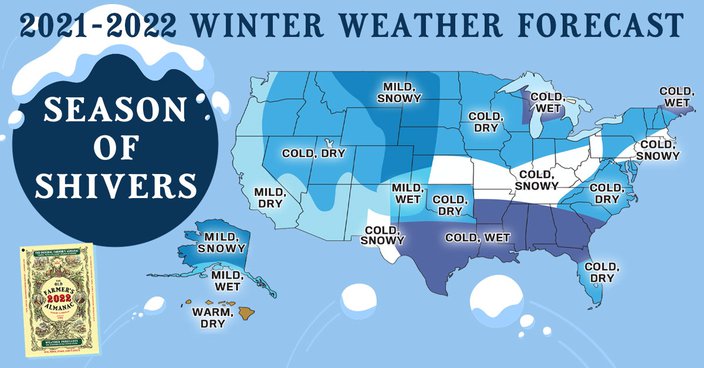 The Old Farmer's Almanac predictions for the 2021-22 winter season.

By its own admission. the Old Farmer's Almanac uses a "secret formula" to make long-range weather predictions based on solar activity, climatology and meteorology. The almanac claims to have roughly 80% accuracy in its predictions, which it reviews each year after the season has finished.


Philadelphia had a slightly above-average winter in terms of snowfall in 2020-21, accumulating approximately 23.9 inches during the course of several successive storms. The counties surrounding the city saw higher snow totals and a few particularly heavy, disruptive storms.

The year prior, Philadelphia had one of its mildest winters on record, totaling just 0.3 inches of snow from December through February. The city's average seasonal snowfall amount was about 18.7 inches during the long-range period from 1981-2010, according to the NOAA, but had jumped to 31.9 inches for the ten-year period ending in 2017-18. A long term average of about 22 inches is normal in Philadelphia, with a historical low of 13.2 inches during the 10-year period ending in 1931-32.

The Old Farmer's Almanac graded its 2020-21 predictions at 72.2% accuracy for temperatures across its 18 regional divisions in the U.S. and 77.8% accuracy for precipitation. In Pennsylvania, the almanac had predicted above-normal temperatures and a milder winter last year, with "some typically chilly rainy winter periods."

To residents of the Philly area, last winter probably felt a bit more harsh than that, especially after the break of the previous winter.

For comparison's sake, the rival Farmer's Almanac predicts this upcoming winter will have a "typical winter chill" with a stormy January and tranquil February. 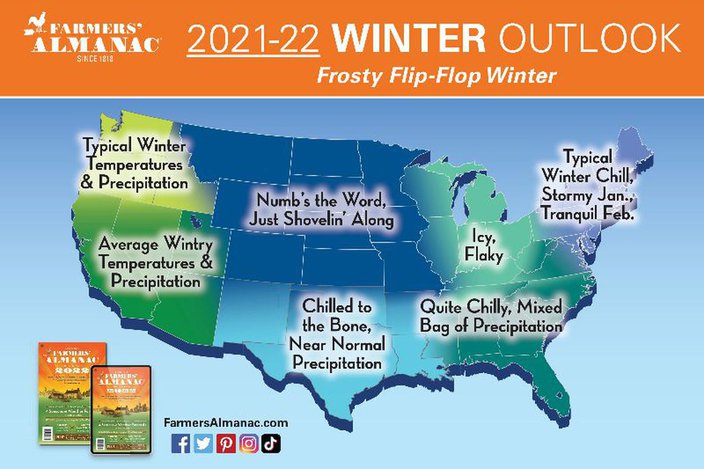 How much stock should be put into a centuries-old method of weather prediction?


Not much at all, according to Popular Mechanics, which advises people not to trust these forecasts built on pseudoscience:

At best, the Almanac is secret stuff with a questionable amount of actual science involved. It's impossible to peer review. Meanwhile there's legitimate, non-secret science out there for predicting this sort of thing though its impossible to predict weather with much accuracy beyond a week.

If (the) Almanac is right — and it will inevitably sometimes be right — lending its predictions any credence in the first place only leads to confirmation bias. People will remember the prediction this winter and recall how the Almanac got it right; they'll just never know about the times it was wrong.

Though the Old Farmer's Almanac still touts an 80% accuracy rate, an atmospheric scientist at the University of Illinois put the data to the test over a five-year period and found that the accuracy rate was about 50% for both temperatures and precipitation. In other words, it may all be as good as a coin toss.

Traditions like these are hard to escape, but it's probably better for the region when the predictions call for a harsher winter. If it it turns out to be true, people in the area will have taken the time to better prepare for what's coming. And if it's false? It will be both a relief and further reason to cast doubt on the almanacs.