Flooding recedes at Park Towne Place, but residents unhappy how the complex is handling the aftermath

'It feels like there hasn't been a lot of compassion,' one resident says 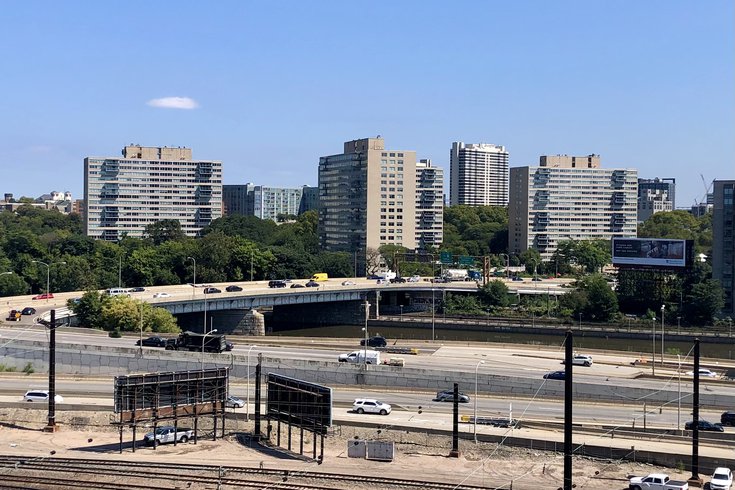 Residents at Park Towne Place apartments, shown above from the opposite side of the Schuylkill River, were evacuated on Sept. 2, 2021, due to flooding caused by the remnants of Hurricane Ida. Except for brief chances to reenter and gather some belongings, people remained locked out of the complex until Labor Day. Many who live there are unhappy about how the complex's management handled of the aftermath of the natural disaster.

Angelica Steele regained access to her apartment at Park Towne Place on Labor Day, but she said Wednesday she doesn't know when she'll return to the four-building complex along the Ben Franklin Parkway. One week after all residents were forced to evacuate the high-rise community, due to the historic flooding caused by the remnants of Hurricane Ida, Steele is staying with her parents in Levittown, drafting a letter to Park Towne Place management.

Steele, 22, said her totaled car and other vehicles still sit in the complex's underground parking garage. When floodwaters pouring in from the Schuylkill River reached their peak, her vehicle was fully submerged. Neither her car insurance nor her renter's insurance will cover the damage.

"I'm very lucky. (My parents) offered to let me borrow their extra car, but I don't feel comfortable parking on the street with how crazy things are right now," said Steele, who lives in Park Towne Place's south tower. "Since my car is still in the basement, I'm not allowed to touch it or not even allowed to enter. So there's not a place to park, and (I'm) not sure what to do with my own car at this point."

It took three days for Park Towne Place, located between 22nd and 24th streets just off the parkway, to be deemed safe for most residents to return, according to the Philadelphia Department of Licenses and Inspections. Water has been pumped out and utilities have been  restored to the buildings. But uncertainty and frustration abound for Steele and others, who are voicing grievances about how management handled of the once-in-a-century natural disaster.

"We don't want to blame anybody or get anyone fired or anything like that," Steele said. "It's just, it feels like there hasn't been a lot of compassion, and we just want some of that and some help with the stuff that we're going through." 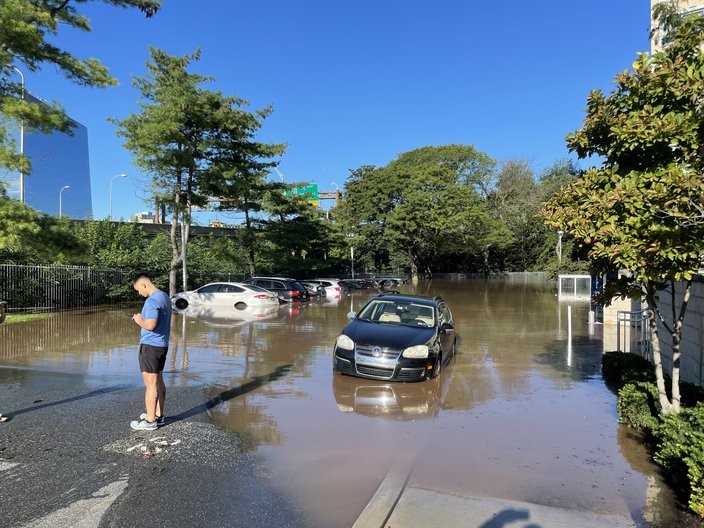 Residents of Park Towne Place, a four-tower apartment complex not far from the banks of the Schuylkill River in Philadelphia, were ordered to evacuate their homes Thursday, Sept. 2, 2021, due to flooding from storms generated by what had been Hurricane Ida.

Park Towne Place residents were first notified about flooding reaching the south tower just after 4 a.m. Thursday, Sept. 2, according to emails shared with PhillyVoice. Steele and others wonder why it took that long for an alert to go out when they said multiple people had reported flooding to staff as early as 2 a.m.

Another concern mentioned by four residents who spoke with PhillyVoice: It took management about four hours after that first email to make an announcement using Park Towne Place's emergency speaker system that broadcasts to all 900-plus units.

"They test it pretty frequently," said Dennis Samuel, a 27-year-old resident of the east tower. "I was so surprised that I didn't hear that on at, like, 4 a.m. because I know people went up to the front desk and mentioned the water leaking in the basement and some of it, like, flooding a little bit. And at that point, I would assume they just turn on the intercom system (and) make sure everyone's awake. Even if it was like six o'clock (in the morning), it would have been enough time for everyone to get their car out."

Steele described being woken up around 8:30 a.m. to the emergency speaker system "telling people to move their cars for fire trucks that were coming in." Less than two hours later, residents received an email saying power would be shut off in all buildings "to ensure the community's safety." An hour after that residents were instructed to evacuate immediately and notified that the buildings' doors would be locked at 12:45 p.m.

Management directed displaced residents to an American Red Cross reception center at West Philadelphia High School, and the city's Office of Emergency Management coordinated with SEPTA to provide transportation to the school.

Park Towne Place general manager Scott Seeley did not respond to a request for comment. Stephanie Joslin, the director of corporate communications for Park Towne Place's ownership, Air Communities, said she and a crisis team based in Denver assisted staff on the ground in Philadelphia by sending out text and email alerts to residents.

"Letting residents know what was happening was at the top of their priority list, but I don't have exact specifics on when that first notification first went out versus when our team was aware of what was happening," Joslin said.

On the evening of Sept. 2, residents received an email saying they'd be allowed back to retrieve items from their apartments between 11 a.m. and 3 p.m. the next day. Steele, however, said the plan caused confusion when they later were instructed to email Seeley with their names, apartment numbers, phone numbers and "time preference" for reentering their units.

"When they finally started letting people in, they started letting them in in groups of two, then that increased to groups of five, (and) you were only given 15 minutes," she said. "... They were arguing with people who are saying, like, 'Please, let me go back up. I have medicine up there; I forgot it.'"

Samuel said he thought staff were "friendly" and "understanding" during the retrieval process. He blamed the confusion on management.

"It was a really weird type of procedure," he said. "Every two seconds, they kept changing it." 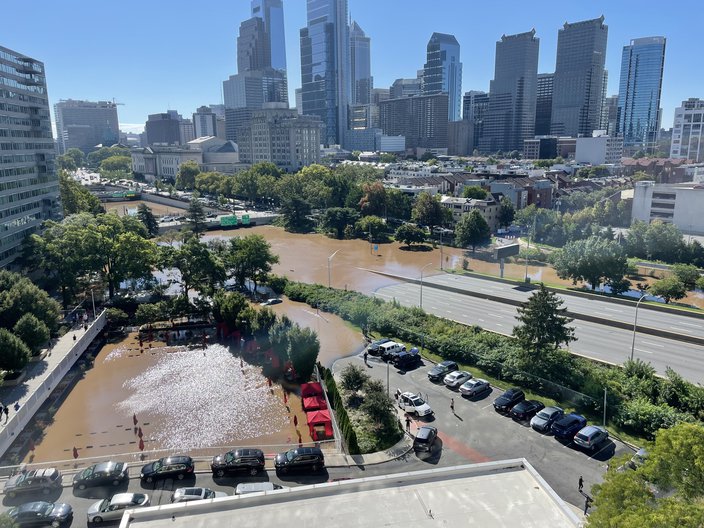 Park Towne Place residents were allowed to return to their homes on Monday, Sept. 6.

More concerning than the logistics of Sept. 3, residents said, were the conditions of some apartments when they returned.

After the flood, Park Towne Place residents communicated with one another – and shared information and experiences – using a Discord server. Some described how their belongings had been piled in the middle of their apartments. Some said they had insulin and other prescription medicines thrown away when crews cleared perishables from refrigerators after the electricity was turned off.

Residents who reached out to Park Towne Place's management left messages on Discord that the complex had hired at least two companies to clean out the apartments after the towers were evacuated. Steele posted a message that some residents are looking into how to report the improper disposal of medicine.

"The intent and the goal for us cleaning up those fridges was to remove any hazards," Air Communities' Joslin said. "At the time that that fridge clean-out occurred, our team was in, you know, disaster recovery mode, moving extremely quickly trying to clear 900 apartment homes and get those hazards out of there. Those types of situations, that quickness, may have caused some accidental removal or throwing away of things that didn't need to be, and that's unfortunate.

"We encourage residents who've had issues or questions to email us, talk to us individually, and we'll address them (and) work with them as we can," she added.

When the all-clear to reenter Park Towne Place was given on Monday, management sent a t ext message to residents saying that each would receive a $500 rent credit "to help defray expenses incurred during this unprecedented time."

The payments, what Joslin called a "good faith" gesture, were announced roughly 24 hours after more than 100 residents signed a letter sent to Air Communities President Keith Kimmel, listing steps they'd like to see the apartment complex take to address to rectify how Park Towne Place's management handled the natural disaster.

"We know everyone's situation is different," Joslin said. "Ultimately, our feeling is that our team worked around the clock over the holiday weekend to get our residents back in their home as quickly as possible." 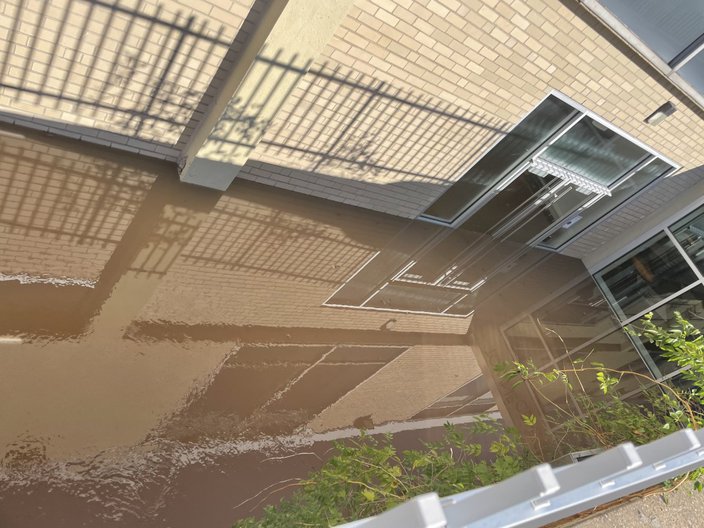 Crews spent days pumping water from the Park Towne Place property, near 22nd Street and the Ben Franklin Parkway in Philadelphia, after low-lying areas of the complex flooded.

Per a copy of the letter obtained by PhillyVoice, some of the residents' requests include:

• Penalty-free early lease termination for 30 days
• Reimbursing residents who had to pay car insurance deductibles, as well as paying any sum not covered by insurance that a resident owed on a loan for a totaled vehicle
• Holding the companies that cleaned out apartment refrigerators responsible for the cost of non-perishable items that were thrown out
• Providing residents with copies of the facility's emergency planning protocol

For now, it appears Park Towne Place will not allow leases to be ended early. One resident on the Discord server shared a screenshot of an email from Seeley saying residents would need to provide 60 days written notice and pay a three-month fee if they broke their leases.

Regarding the letter, Joslin said, "We know that our response may not have been perfect, but we did the best we can under an unprecedented, 150-year flood."

The $500 credit may eased some residents' frustrations, but Steele said the money won't replace her totaled car or cover what people paid in hotel or Airbnb fees while they were displaced. She and others also have a problem with management's insistence to address concerns individually and not speak to residents as a community.

"I don't want to say that they're 100% responsible for everything; it was a natural disaster," Steele said. "But it ...  doesn't feel like they're doing enough to help us."