Park Towne Place has locked the doors to its four towers until further notice, but a shelter is available for displaced residents 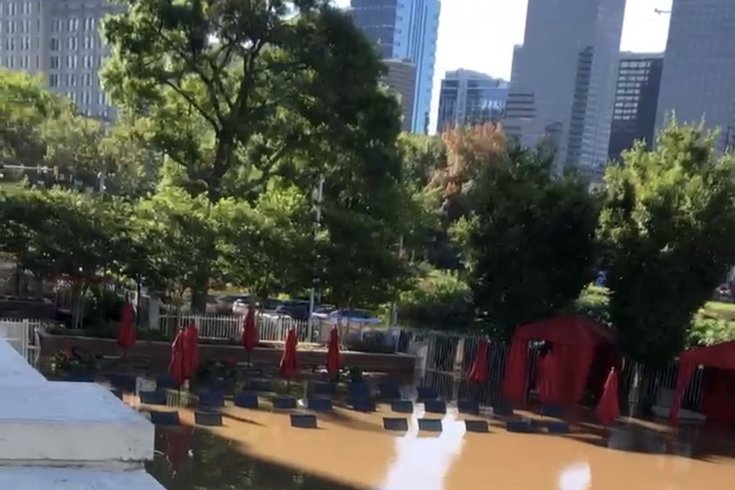 Residents of the four-tower Park Towne Plaza apartment complex on 22nd Street were told to evacuate due to "deteriorating conditions" caused by rising floodwaters from the Schuylkill River. Above, the complex's pool area submerged in floodwaters.

Park Towne Place residents had to race against the clock Thursday afternoon after management ordered everyone to evacuate the apartment complex due to "deteriorating conditions" caused by rising floodwaters from the Schuylkill River.

Around 10 a.m., management informed residents of the complex's 900-plus units that power would be shut off in all four towers "to ensure the community's safety." By noon, another alert instructed residents to evacuate immediately in anticipation of entrance doors being locked at 12:45 p.m.

"NO ONE should enter ANY buildings," the alert said. "Re-entry will not be allowed until further notice."

The complex is located on 22nd Street near the Vine Street Expressway, which was overcome by flood waters earlier in the day.

Alexzandra Celmayster, who lives in the north tower, told PhillyVoice that residents received an alert about the south tower flooding around 4 a.m. Water initially flooded the complex's pool and cafe area as well as cars parked in above-ground lots, she said. Then it entered an underground parking garage, where KYW reports the facility's electrical panels are located.

After receiving the evacuation alert, Celmayster went to an apartment occupied by her roommate's parents near City Hall. She and her roommate quickly returned to the apartment complex, however, to grab more of their belongings.

"We realized we probably should go back and get more since they're gonna close it (and) we don't know when we're gonna go back," Celmayster said. "We had to rush back (and) got back around like 12:30 (p.m.); we had like 15 minutes to kind of run in and out.

"When we were doing that, everyone was standing out by the suitcases trying to figure out where to go," she added. "A lot of people were calling family. We talked to one guy, and … his voice was kind of freaking out. He was asking us questions; we were like, 'Oh, we just moved here so we really don't know what we're gonna do.'"

The American Red Cross has reopened its reception center at West Philadelphia High School, located at 4901 Chestnut St., to provide shelter for Park Towne Place residents and anyone else who needs a place to stay, Regional Communications Director Dave Skutnik said.

The city's Office of Emergency Management has coordinated with SEPTA to provide buses that will transport residents to the high school, according to a message Park Towne Place management sent to residents. The buses will be parked in front of the north tower.

The Schuylkill River is forecasted to crest at 17.2 feet by nearby 30th Street Station, according to the National Weather Service, after parts of the region saw more than eight inches of rainfall Wednesday night. The river has never risen above 17 feet before, city officials said.