The destructive weather prompts rescues, road closures and damage assessments across the region 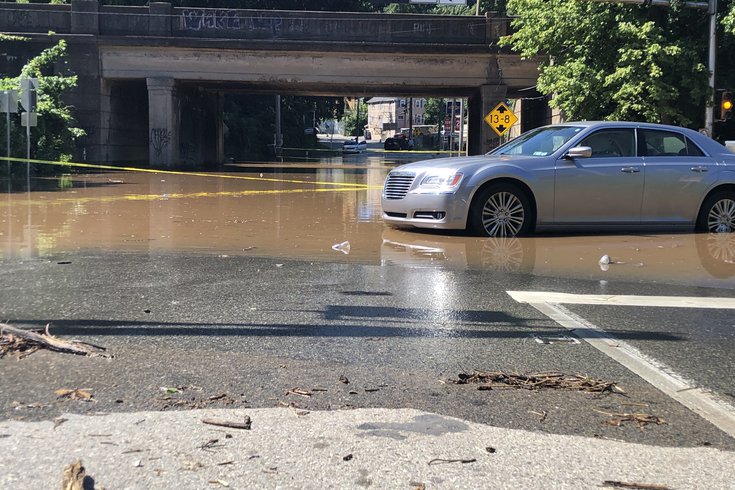 Caution tape lined Belmont Avenue on Thursday afternoon at the Montgomery County end of the Green Lane Bridge near the Schuylkill Expressway. The remnants of Hurricane Ida left major roadways flooded and caused extensive damage in the Philadelphia suburbs, where several reported tornados are being investigated by the National Weather Service.

At least three people were killed in Montgomery County as a result of storm damage and flooding caused by the powerful remnants of Hurricane Ida, which ravaged the Philadelphia suburbs and left a trail of destruction across much of Southeastern Pennsylvania on Wednesday.

The three known fatalities include one person in Upper Dublin who died from structural damage caused by the storm, Montgomery County Commissioner Dr. Valerie Arkoosh said Thursday morning. Two other deaths are believed to be from drowning, including person in a car and another victim who became trapped inside a flooded building. The locations of these incidents were not provided.

All three fatalities remain under investigation and none of the victims were immediately identified.

Stunning scenes of flooding and property damage were reported across the Philadelphia suburbs, where the National Weather Service is still investigating multiple reports of tornadoes touching down in Montgomery County, Chester County and at three separate areas in Bucks County.

In Montgomery County, a destructive tornado formed Wednesday evening along the Route 309 corridor. Towns impacted by the damaging winds included Whitemarsh Township through Upper Dublin and all the way to Horsham, with multiple reports of significant damage in the area of Ambler, Fort Washington and Willow Grove. The NWS station in Mount Holly said winds from the confirmed E-F2 tornado reached an estimated peak of 130 mph, and at least seven tornados hit the area in Southeastern Pennsylvania and New Jersey.

[5:48 PM] Storm damage survey team has confirmed a tornado in Upper Makefield Township, PA (Bucks County). More details including the rating will be coming this evening or tomorrow. This is the 7th confirmed tornado in our area from the Sept 1 storms. #PAwx

Severe flooding has been reported in multiple locations, including extreme water levels seen in Conshohocken.

"This storm is a historical flooding event with total rainfall coming in at an average of 8.25 inches countywide," Arkoosh said Thursday of the flooding in Montgomery County. "Many of our roads and bridges remain closed."

Some more pics from Conshohocken pic.twitter.com/giRHVpMCM2

Arkoosh added that the most troubling bodies of water in the county remain the Schuylkill River and Perkiomen Creek, both of which continued to rise on Thursday and had not yet crested as they surpassed all-time records. Several other waterways shattered previous crest records, including the Neshaminy Creek and points along the Brandywine Creek and its East Branch.

View of the Neshaminy Creek from Old Lincoln Highway. pic.twitter.com/JF7sKlUhf3

In Downingtown, Chester County, a woman was seen carrying a child through waist-level water on Wednesday night, mirroring scenes across the Delaware Valley.

Montgomery County received a record 6,583 calls for assistance after 11 a.m. Wednesday, about three times the normal call volume in a 24-hour period. The busiest time for calls was between 6-7 p.m., when the worst of the storm and the EF-2 tornado ripped through the county.

More than 452 calls were for water rescues events, some of which remained ongoing Thursday, Arkoosh said. State officials estimated at least 1,000 water rescue events have occurred across Pennsylvania since the storm hit.

During one rescue in Bucks County, a team of firefighters became pinned up against a bridge pier and ended up needing to be rescued themselves. The firefighters later were sent to a hospital, PEMA Director Randy Padfield said.

In Chester County, evacuations took place due to flooding over the Pickering Creek Dam in the area of Phoenixville, where Route 23 became completely flooded. The roadway had been raised in years past to prevent this type of event, but Ida's rainfall proved too much to keep the street clear.

Parts of Haverford and Radnor townships in Delaware County saw significant flooding as well, requiring rescues as concerns grew overnight about the swelling of Karakung Creek.

As damage assessments continue across the region, Arkoosh advised residents to stay home if possible. Children and pets should be kept away from flooded areas to avoid downed power lines, sudden drops in the ground surface and potentially hazardous chemicals in the water.

"Our advice to residents is to stay vigilant and stay off the roads if you can," Arkoosh said.

Across Pennsylvania, nearly 78,000 households and businesses remained without power Thursday, including about 38,000 in Montgomery County.

Arkoosh said assistance to businesses and homeowners is already on the minds of government officials.

"We are working closely with the state, and the state will be working with the federal government around emergency declarations and assistance that will come through there," Arkoosh said. "We're still in the midst of damage assessment right now, but we will certainly work with the business community (and homeowners) to assess their needs and see what we can offer in terms of assistance."

PEMA meteorologist Jeff Jumper said the impacts of climate change appear to be having a clear effect on the intensity of weather events seen in the region and elsewhere.

"There's a lot of research out there of increased heavy precipitation events," Jumper said. "While the rain overall may not be going up, we're getting them in shorter bursts rather than those longer periods of time. We're seeing more of these flash flood events versus a traditional river flooding event."

Jumper said the state's Climate Action Plan and hazard mitigation efforts take into account how events like Wednesday's rain and storms can be better anticipated and managed in the years ahead.

As of Thursday afternoon, PennDOT officials said 389 roads remained closed statewide, including 243 from flooding and many others from downed trees and utilities. At least 16 major roadways, including Interstate 76 in Philadelphia, remained closed due to flooding.

"We understand that closed roadways and other impacts from the storm can be frustrating," said PennDOT acting Executive Deputy Secretary Melissa Batula. "Even though the rains have stopped, it is still so important that the public remain vigilant, and allow space for our crews and for emergency workers to do their jobs."

Residents in heavily impacted areas are encouraged to take pictures of all damage and initiate contact with local clean-up crews and insurance companies to submit claims as soon as possible.

"We have a long road ahead of us," Gov. Tom Wolf said. "It will take time to complete damage assessments and make assistance and resources available, but we will continue to share information about assistance as it becomes available in the days and weeks ahead. Right now, my administration is continuing to do everything in our power to support local emergency officials as they begin to assess the damage this storm caused in their communities."