The Schuylkill River is forecasted to crest at more than 17 feet Thursday morning, according to the National Weather Service 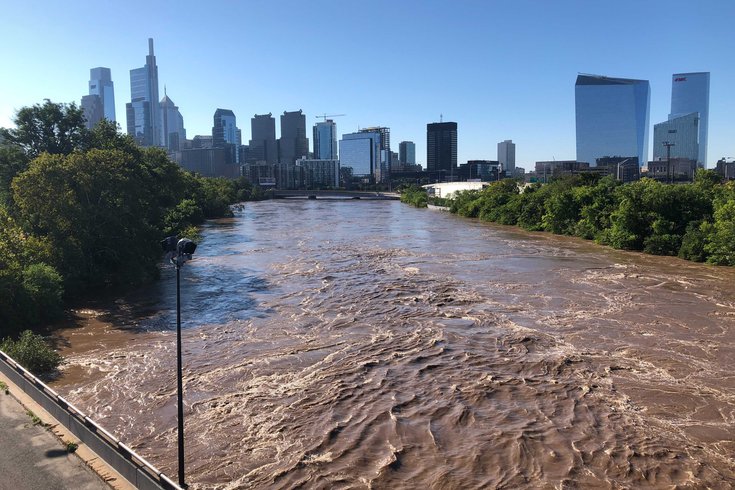 The Schuylkill River had already experienced 'major flooding' by early Thursday morning before cresting at over 17 feet in Philly.

Philly residents who live near the Schuylkill River have been advised to shelter in place as the body of water is expected to crest at record-high levels Thursday in the wake of Ida's remnants slamming the Delaware Valley Wednesday night.

The Schuylkill River by 30th Street Station is forecasted to crest at 17.2 feet Thursday morning, according to the National Weather Service, after parts of the region saw more than eight inches of rainfall Wednesday night.

The river has never risen above 17 feet before, city officials said. The current record of 17 feet was set 152 years ago, the Inquirer reported.

The Schuylkill River had already experienced "major flooding" by early Thursday morning, according to the National Weather Service. The river was recorded at more than 16 feet high as of Thursday morning, city officials said.

The flooding of the Schuylkill River forced Kelly Drive, Martin Luther King Jr. Drive and the Vine Street Expressway to close down. It also led to widespread flooding at Boathouse Row and across Manayunk.

BREAKING: major, historic flooding in Manayunk along Main Street as the Schuylkill floods over… all that rain draining and it’s gonna keep rising for hours to come @NBCPhiladelphia Many shops flooded pic.twitter.com/DE0MGLRJ8Z

Boathouse Row Philly this AM. Screen shot from Fox 29 helicopter vid. Expected to crest at 17.2 ft at about now. 17.0 ft is record. pic.twitter.com/te2k8ptpEr

The Delaware River rose to more than a foot above flood stage Wednesday night, leaving parts of Columbus Boulevard submerged in water.

Columbus Blvd by the Ben Franklin Bridge is underwater and the road closed to traffic as #Ida remnants cause major flooding. The Delaware River is expected to reach its highest water level in 10 yrs & multiple tornadoes were confirmed in the Philly region: https://t.co/csZ6yvD8kH pic.twitter.com/DdJw4U4l9q

Philly residents who need to evacuate to a safe place can go to one of the city's reception centers that have been set up with the Red Cross at West Philadelphia High School and Roxborough High School.

Evacuations have been advised for all residents and businesses downstream of Pickering Creek Dam in parts of Montgomery and Chester counties due to the anticipated impact of flooding from the Schuylkill River, local officials said Thursday morning. The river is expected to rise to as high as 27 feet in Norristown.

Other rivers and streams across the region that saw record-high flooding from Wednesday night's storms included the Brandywine Creek at Chadds Ford rising more than 21 feet and the Perkiomen Creek at Graterford cracking 20 feet.

Ida's remnants left close to 58,000 residents of the Philly region without power as of Thursday morning. SEPTA service remained operational, but with significant delays and cancellations. Amtrak service from Philly to Boston before 9 a.m. Thursday was canceled.

Wide-spread flooding throughout the SEPTA service area is causing service delays and cancelations. This is Miquon Station on the Manayunk/Norristown Line. Service on this line is currently suspended. pic.twitter.com/HySdW5U1Gw

Wednesday night's storms forced several school districts in the Philly suburbs to cancel classes Thursday. All New Jersey Transit service, except for the Atlantic City line, has been suspended in the wake of the damage.

Ida began as a Category 4 Hurricane and slammed into the Louisiana coastline over the weekend, pummeling the area with torrential rain, wind and flooding that left damage across the region.

At least six deaths have been attributed to the storm across the South. More than one million people in Louisiana and Mississippi remain without power in the aftermath of the hurricane.