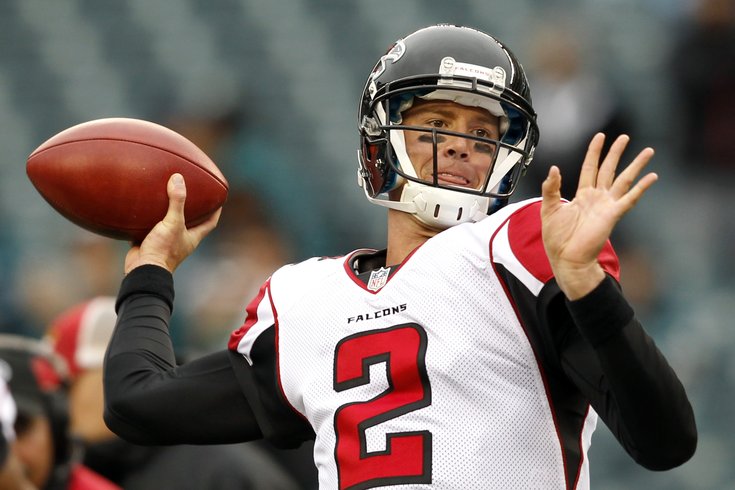 Matt Ryan will be protected by a shaky offensive line Monday night.

For the gambling degenerates, here are my Week 1 picks. To note, the helmets indicate who I think will win the game, not cover the spread. At the end of the picks, I'll note a few teams that I like based on the spread.

Steelers at Patri*ts (-7): The Patri*ts always seem to come out on fire whenever they face adversity. Which is a lot. Since, you know, they get caught cheating and testing the integrity of the game, like, all the time, and never seem to have any real consequences. Never bet against cheating cheaters like Tom Brady and Bill Belichick.

Packers (-7) at Bears: If you read my NFL season predictions, you saw that I have the Bears picking second in the 2016 NFL Draft. The Bears are garbage, and Aaron Rodgers owns them. In his last three games against Chicago, Rodgers and the Packers have put up 126 points (42 per game). Seven points may seem like a big spread for a road team on Week 1, but I'd be all over that.

Chiefs at Texans (Pick 'em): The Texans have an intriguing roster, but those quarterbacks... Bleh. Houston's D feasts on turnovers, as they led the league last year with 34 of them. However, the Chiefs' offense turned the ball over just 17 times last season. Only three teams turned it over less. In that respect, I think Alex Smith's conservative approach makes this a nice matchup for the Chiefs.

Browns at Jets (-3): "Josh McCown! Ryan Fitzpatrick! Browns. Jets. We'll be kicking off after this commercial break, right here on CBS." (Cue CBS music). Both of these teams are going to struggle to score points this season, so give me the team with the better D. That's the Jets. I live in North Jersey, and am purposely not going to be there on Sunday so I can avoid having to watch this game.

Colts (-3) at Bills: This is a sneaky-good game Week 1. The Bills are loaded with talent on defense, especially with their ability to get to the quarterback, as they led the NFL with 54 sacks last season. They also have a good running game, as LeSean McCoy is expected to play, which could help keep the Colts' offense off the field. This is a great early test for Andrew Luck and the Colts, who are thought by many to be Super Bowl contenders this season.

Dolphins (-4) at Redskins: The Redskins aren't just a dumpster fire. They're a landfill fire. And yet, it actually wouldn't surprise me if they came out and played well Week 1. Still, this is simply an under-manned team coached by an over-matched staff. The Redskins are contenders for the #1 overall pick in 2016.

Panthers (-3) at Jaguars: The Expansion Bowl! Jeez, there are so many road favorites Week 1. Eight of them (plus a pick 'em), actually. This one worries me. The Panthers' receivers are hot garbage. I'm not sure how that team is going to score points this season. Then again, it's not as if the Jaguars are anywhere close to becoming a playoff contender. When in doubt, go with the better defense.

Seahawks (-4.5) at Rams: The Seahawks, in my opinion, are still the best team in the NFL, with by far and away the best defense, even with Kam Chancellor out. For the fourth straight year, the Rams have the youngest team in the league. At what point is that youth going to translate into something worthwhile on the field? Not this year.

Saints at Cardinals (-2.5): The Cardinals are frauds. Overrated offense, overrated defense, overrated coach. It's not very often a team wins 11 games and has a point differential of just +11, which the Cardinals did a season ago. They have Carson Palmer back, which will help... a lot. But what else on this roster is there to be really excited about. Meanwhile, as long as Drew Brees is indoors, I think the Saints will be able to move the ball. I like the Saints to win, outright.

Lions at Chargers (-3): Here's a matchup where I really like what both teams are doing. The Lions are one of the most underrated teams in the NFL, and the Chargers have an elite QB that doesn't get the recognition he deserves. I like this matchup for Detroit. I think they can fairly easily shut down the Chargers' run game, and then get after Philip Rivers on 3rd and long.

Titans at Buccaneers (-3): Ah, the Rookie QB Bowl! Marcus Mariota vs Jameis Winston. Both of these teams are terrible, obviously, as they were drafting #1 and #2 in the 2015 NFL Draft. Winston will have better skill players to work with, but his offensive line could be a dumpster fire. Meanwhile, Mariota's OL is OK, but he has nothing to whatsoever to work with, skill player-wise. I've always been a "trenches" guy, so I'll begrudgingly take Chip's protege and the Titans.

Bengals (-3.5) at Raiders: I am so tempted to take the Raiders here, because I have basically lost all faith in Andy Dalton (not that I really had any faith in him in the first place). I think the Raiders will be able to do something this year that they haven't been able to do in ages -- score points. But, I just can't do it yet. The Raiders will still be the Raiders until I see them look un-Raidery.

Ravens at Broncos (-5): The Ravens are getting a lot of hype, and I'm not sure why. In joint practices with the Eagles, their skill players both on offense and defense looked rather unimpressive. Playing in Denver to kick off the season is a tough first game for them, as I don't believe they have the personnel in their secondary to match up with the Broncos' offensive weaponry.

Giants at Cowboys (-7): I don't think the Giants are good. At all. However, seven points is a lot for Week 1, especially when we don't know yet if the Cowboys can run the ball like they did a year ago. In this matchup, however, it won't matter. The Cowboys should be able to run all over the Giants no matter who they have at RB, as the Giants had a league-worst 4.9 yards per carry allowed a season ago.

Eagles (-3) at Falcons: The Eagles should be able to win in the trenches in this one. The Eagles' talented pass-rushing ensemble will be facing a banged-up OL defensively. Offensively, they'll be protecting Sam Bradford against a team in which all their defensive linemen (starters and reserves) combined for 8.5 sacks a year ago. Look for the Eagles to get off to a fast start this season.

Vikings (-3) at 49ers: When you look at these two teams and see that the Vikings are a road favorite in San Francisco, it just goes to show what has happened to this once great 49ers team in a short period of time. However, I think this spread is an overreaction, and while I think the Vikings have a nice roster, it's not like they're some sort of proven winning team. I'll take the Niners at home to win outright, and reserve jumping aboard the "complete collapse" bandwagon if they look bad. But until them, I'm not buying the Viking laying three on the road.