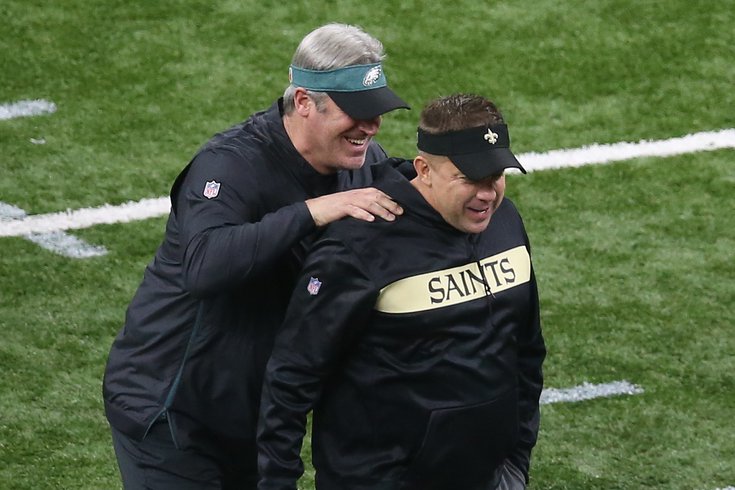 For the gambling enthusiasts, here are my Week 14 NFL picks. To note, the team logos indicate who I think will win the game, not cover the spread. At the end of the picks, I'll note a few teams that I like based on the spread. All the below spreads are courtesy of the consensus Week 14 odds at TheLines.com.

Patri*ts at Rams (-5): This game is a matchup between two teams that have faced each other twice in the Super Bowl. The Patri*ts clearly cheated in the first one, while the rematch was the worst Super Bowl I've ever seen. The bet here is that they cheated in that one too, given their long history of cheating.

The Rams should win this one, unless Jared Goff suffers some kind of in-game PTSD.

Texans (-1) at Bears: After starting out 1-5, the Bears have lost six straight. Meanwhile, after the Texans started out 0-4, they fired Bill O'Brien and have at least managed to go 4-4 since. This is a classic "Hey maybe we should have drafted the opposing quarterback instead of this crappy guy we got instead" game for the Bears, and one they'll lose. Oh and I only have to lay a point? Yes, please.

Cowboys (-3.5) at Bengals: This matchup has potential draft positioning implications for the Eagles. If the Cowboys win and the Eagles lose, the Eagles will leapfrog the Cowboys in the draft order, moving from pick No. 6 to pick No. 5. If the Bengals win, the Eagles will probably pass them instead. The Eagles and Bengals will have the same record, but the Eagles would have the strength of schedule tiebreaker, as it stands now, though that gap has narrowed in recent weeks. 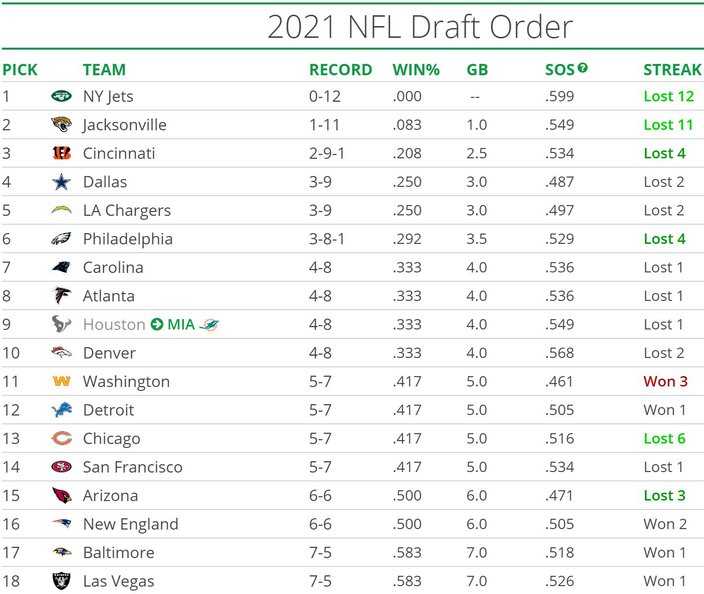 I think if you're an Eagles fan, you root for the Cowboys here, but we'll get into more detail on that in the rooting guide on Sunday.

Chiefs (-7) at Dolphins: This is a really interesting matchup between the most fun offense in the NFL (the Chiefs, duh), and the Dolphins' swarming, unpredictable defense. The Chiefs' last four games (all wins) have been by a combined 15 points. Their margins of victory: 2, 4, 3, and 6. I like the Dolphins at 7.5. Can't pull the trigger on them against the Chiefs for anything less, so I'll pass here.

Cardinals (-1.5) at Giants: This line moved from Cards (-2.5) to Cards (-1.5), so it would appear that folks are jumping on the Giants' bandwagon. That's understandable. The Giants have won four straight, while the Cards have lost four of five, and their lone win was on a Hail Mary.

But let's be real. This Cardinals team is better than the Giants, and a 1.5-point spread looks really good on paper. I'll bite.

Vikings at Buccaneers (-6.5): We pointed this out in the hierarchy this week, but let's go ahead and cover it again here, just in case you missed it.

As of September, more than 400,000 American small businesses permanently closed since the COVID crisis began.

Tom Brady’s company took almost $1M in PPP loans, while 52% of small businesses that applied didn’t get any.

On Tuesday, according to TMZ, Tom Brady bought a boat valued at a couple million. Tom Brady is a scumbag.

Broncos at Panthers (-3.5): A couple of 4-8 teams with nothing to play for, and not even any real draft implication intrigue.

Titans (-7) at Jaguars: The Titans are tied with the Colts at 8-4 in the AFC South. They already split their matchups this this year, but the Titans hold a divisional record tiebreaker over Indy, because of Indy's awful loss Week 1 to the Jags. The Titans cannot have that same slipup.

Colts (-2.5) at Raiders: The Raiders should have lost to the Jets last week, and the week before, they lost 43-6 to the Falcons. Why is this line only 2.5 points?

Jets at Seahawks (-13.5): The Seahawks were heavy favorites a week ago to a New Jersey team, and lost. They'll beat this one.

Packers (-7.5) at Lions: The Lions got their "We fired the coach that everyone hated" win last week. That was their Super Bowl. Now it's back to losing.

Saints (-6.5) at Eagles: The Eagles switched out Carson Wentz for Jalen Hurts, but it won't matter much. The Eagles' receivers and their offensive line remain issues, and more importantly, the offense is broken schematically. Surely, it'll look a little different with Hurts at the helm instead of Wentz, and it might even be exciting watching a quarterback with more athletic ability, but the expectation here is that it won't result in much of a difference on the scoreboard, especially against a stingy Saints defense.

If Drew Brees plays, he should be able to carve up the Eagles' defense, like he usually does. It's forecasted to be 60 degrees and sunny on Sunday, so there will be little benefit to facing Brees outdoors. If Taysom Hill starts, running quarterbacks have done damage against the Eagles this season.

Falcons (-2.5) at Chargers: If we did a mulligan on the season, as in, we got to start it over, I might have the Falcons making the playoff in this crappy NFC. They're not awful. The Chargers are, and they're limping toward the finish line.

Steelers at Bills (-2): I figured the Steelers would be favored in this game and I was looking forward to betting the Bills, but the oddsmakers unfortunately set this line correctly. The Bills are better, in my view.

Ravens (-1) at Browns: It's crazy to me that the Ravens' Tuesday night game against the Cowboys was even played, given that it was revealed that Dez Bryant had tested positive for COVID. Bryant closely interacted with other players on the field, as this since-deleted tweet by a Ravens employee clearly shows:

So, who knows what kind of spread the Ravens will have this week. If I have to pick the game, Ravens I guess, with no confidence.

Byes: No more byes this season.