Week 13 of the NFL season is in the books, and we finally have our first NFC East obituary of the season in the Dallas Cowboys. We could also very easily kill off the Philadelphia Eagles, but we'll save their obit for next week (probably).

On Tuesday night, the Ravens ran it 37 times for 294 yards (7.9 YPC) and 2 TDs, with three different players ripping off 30-plus yard runs. And that has sort of been the story of the Cowboys' 2020 season, which wasn't going anywhere even if Dak Prescott hadn't gotten hurt, but was obviously doomed further when he went down.

A look at the Cowboys' game-by-game run defense:

We all know the NFL is passing league, of course, but if teams are just running through your defense like you're Prairie View A&M, it really doesn't matter much if your quarterback is Dak Prescott or Andy Dalton or Ben DiNucci.

Looking forward, the Cowboys will perhaps appreciate what they have in Prescott a little more than they did previously, but the ship has sailed on any sort of team-friendly deal. Prescott seems destined for a second franchise tag this offseason worth approximately $37.7 million, which will make it difficult to navigate an already cramped salary cap.

The Cowboys are loaded with receiving talent, but the offensive line is aging, Ezekiel Elliott is on his way to being washed (we'll say he's in the pre-soak cycle?), and the broken defense needs help at all three levels.

The return of Prescott, however, will bring renewed hype and delusional hope in 2021, as is always the case in Dallas. I look forward to hearing why they're Super Bowl contenders for the eleventy billionth straight year in a few months. 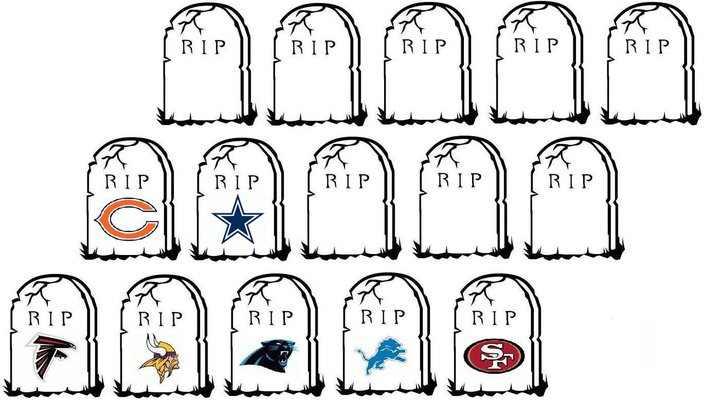 9) Eagles: The Eagles are done, too, but by Hierarchy/Obituary Law, we cannot kill off the Eagles and Cowboys in the same week. We'll give them a proper sendoff after they lose to the Saints this Sunday.

8) Giants: When the season began, the NFC East was thought of as a "two-team race," which was right. We just all had the teams wrong. It's wild that we're heading into Week 14 and the Eagles and Cowboys have 6 combined wins, while the Giants and Football Team are 6-0 cumulatively in their last 6 games.

When the Giants had three straight wins, it was still easy to dismiss them, given that their opponents were the Football Team, Eagles, and Bengals. Now that they've beaten a legitimate playoff team in the Seahawks, in Seattle no less, they going to start getting some positive attention. The Giants are the frontrunners in the NFC East on the strength of a sweep of the Football Team, though fivethirtyeight.com only has the Giants as 53 percent likely to win the division:

7) Football Team: There are two questions the rest of the way in regard to the Giants and Football Team, if you're a fan of the Eagles or Cowboys:

In my view, the answer to both questions is the Football Team. Their defensive line is a legitimately awesome unit that can serve as the foundation of the franchise, as long as they're able to find a way to retain all of those guys. That line is very deep, and extremely talented. Meanwhile, the secondary behind that group has played reasonably well.

An excited Chase Young proclaimed the Football Team defense to be the best in the NFL after their upset win over the Steelers. They're not there, but surely they have a top 10 defense, at a minimum.

It can be argued that a divisional win and a playoff appearance would do wonders for the mentality of what has been a loser franchise for like 30 years. That's probably true, however, they can also probably feel really good about the direction of the roster going forward, even without a divisional win and quick first-round exit.

What would make this team really dangerous is if they somehow found a good quarterback in the draft, and had him on their salary cap on a rookie deal for the next four years. They're far more likely to find that guy if they're picking 10th-ish than if they're picking 19th (or later).

6) Cardinals: After Week 7, the Cardinals were 5-2, and coming off an impressive overtime win over the Seahawks. The Vikings were 1-5, and we wrote their obituary.

Anyway, we'll hold off bringing the Vikings back from the dead for now, since the easy part of their schedule is over, and it gets (slightly) tougher the rest of the way. The Vikings' and Cardinals' remaining schedules:

5) Buccaneers: As of September, more than 400,000 American small businesses permanently closed since the COVID crisis began.

Tom Brady’s company took almost $1M in PPP loans, while 52% of small businesses that applied didn’t get any.

On Tuesday, according to TMZ, Tom Brady bought a boat valued at a couple million. Tom Brady is a scumbag.

4) Seahawks (8-4): The Seahawks lived in the top spot in our hierarchy for most of the season, but now they find themselves with almost no chance of earning the lone first round bye in the NFC playoffs after their surprising loss at home to the Giants.

They'll have a "get right" game against the Jets this week, but (DK Metcalf aside) their offense was unimpressive against the Eagles Week 12, and they only scored 10 points offensively against the Giants.

If the season ended today, they'd be the 5 seed, playing, uh, the Giants.

3) Rams (8-4): The Rams aside, when you look around at the teams likely to make the playoffs in the NFC, they all have something in common -- at least one great receiver, and in some cases, several great receivers:

The Rams are perhaps the team that is the most well-equipped to handle that weaponry, since they have the best cornerback in the NFL in Jalen Ramsey, and a good supporting secondary in Troy Hill, Darious Williams, John Johnson, and Jordan Fuller.

It's easy to sleep on the Rams because their quarterback is uninspiring, but their defense is more than just Aaron Donald.

2) Packers (9-3): Even when Aaron Rodgers makes mistakes, he gets big plays.

During his Tuesday morning press conference, Jim Schwartz said that he thought the Eagles should have been able to intercept a Rodgers pass that was thrown into a coverage in which the Eagles had an advantage.

"I thought the one chance that we really had to get [an INT] was when we had them backed up," Schwartz said. "Rodgers didn't make very many mistakes in that game. The one -- he aired one out and we had overlap in zone coverage and didn't make the play. But that's a chance to be able to get that ball, and I thought that could have been a game-changing play. We need to make plays like that."

I believe Schwartz was referring to this play, which despite the poor decision still ended up as a 42-yard gain.

Anyway, the Packers are going to head into the playoffs with the best quarterback in the conference, as they have so many other times.

1) Saints (10-2): The question this week for the Saints is whether Drew Brees will return to face the Eagles this Sunday. What's the rush? Let Taysom Hill take care of the Eagles, and allow Brees to heal up and be ready for the Chiefs the following week. This isn't hard.