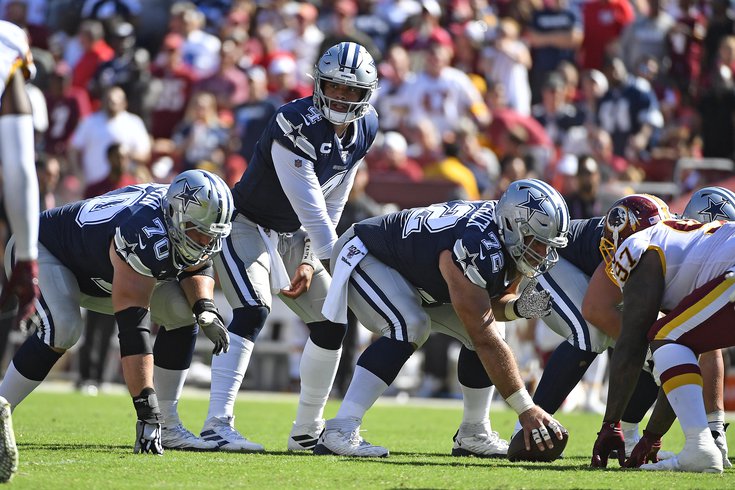 It's debatable, but Eagles fans should probably be rooting for the Cowboys this Sunday. 🤢

And so, each week we'll lay out a rooting guide for non-Eagles games on the NFL schedule, and yes, I'm aware that most of the below is obvious. You can also check out the latest Week 14 odds and read all my picks, here.

If you play around with the the projection model at fivethrityeight.com, a Cowboys loss would double the Eagles' chances of winning the division, from four percent to eight percent. However, it would reduce their chances of making the playoffs, at all, from 35 percent to 31 percent.

A Cowboys win would all but end any already slim chances of the Eagles winning the division, as they'd be at 1 percent. However, it would boost their chances of making the playoffs at all, from 35 percent to 40 percent.

Beggars can't be choosers. I think the ideal outcome is if the Cowboys win, and the Eagles' chances of making the playoffs improve.

The Vikings beat the Steelers on Thursday Night Football, which caused the Vikings to leapfrog the Eagles in the wildcard hunt.

Looking ahead to Sunday's games, the Eagles don't really have to worry about the Panthers, Saints, or Falcons anymore, since (a) they beat all three of those teams, and (b) the Eagles also have a better conference record than all three in the event of a three-team tie. They should be rooting against any team with six or more wins. That would include the following games, with the ideal winners bolded:

And really, the Rams game doesn't matter much, since the Eagles chances of catching them are extremely slim. But certainly, that Niners-Bengals matchup is a big one, for two reasons:

• The Niners lead the Eagles by a half game for the 7 seed, though they would also hold the tiebreaker over the Birds on the strength of the Niners' win over the Eagles Week 2.

• The Bengals are trying to hold off the Colts for a wildcard spot, which is a nice segue into the the AFC wildcard race...

As you're aware, the Eagles own first round picks from the Dolphins and (very likely) the Colts in the 2022 NFL Draft. Both of those teams are on their byes this week, but there are still relevant games to monitor in terms of Eagles draft positioning. Let's look at the AFC wildcard race:

The Eagles do not want the Colts or Dolphins to make the playoffs, so it is ideal for all the 7-5 teams and the 6-6 teams to win this week, such as:

And then of course, it's best if the 8-4 Titans beat the Jaguars to all but eliminate any hopes of the Colts winning the AFC South.

• Falcons at Panthers: The Panthers have a harder strength of schedule than the Falcons, so it's best if they win. Why? If they have the same record as the Dolphins at the end of the season, the Dolphins pick would be higher in the draft order.

• Seahawks at Texans: The 4-8 Seahawks have a chance of catching the 6-7 Dolphins for draft positioning.

• Bears at Packers: The Giants own the Bears' first round pick in 2022.