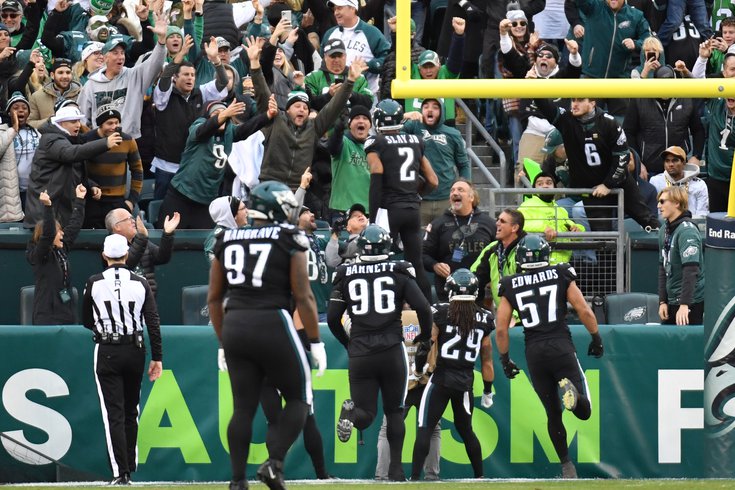 Darius Slay has become the Eagles' best defender in 2021.

Question from JY: Which players have surprised you most with their play this season? Both good and bad versions.

I'll give you five of each.

• RB Jordan Howard: Personally, I didn't even think Howard would make the team, much less become one of their most steady, productive offensive players. Howard was essentially the lead back during a stretch that the Eagles went 3-1.

• CB Avonte Maddox: Maddox had a really rough 2020, as opposing offenses picked on him all season, particualrly with bigger receivers on the outside. After a move to the slot, where he should have been playing all along, Maddox has had a quality 2021 season, earning a contract extension, albeit an expensive one.

• CB Darius Slay: Given the cost to acquire Slay, both in terms of draft pick capital and subsequent new contract, Slay expectations to perform like a bona fide No. 1 corner have always been there. In 2021, Slay has not only played like a No. 1 corner, but he is also probably the best player on the entire defense this season. He made the biggest play of the game against the Broncos, and picked off two passes against the Panthers. Would the Eagles have won that game without those two turnovers in Carolina? I think that's been sort of a forgotten performance this season.

• LT Andre Dillard: He wasn't bad when asked to start four games earlier this season. I mean, he wasn't great either, but my expectations were so low that anything positive was a surprise. To Dillard's credit, he played well enough to provide some level of hope that he can play in this league, boosting his trade value.

• K Jake Elliott: Elliott had his worst season as a pro in 2020, and fans started calling for him to be cut. In 2021, he has bounced back in a major way, making 22 of 24 field goal attempts (one of the misses was blocked), and converting on all 33 of his PATs.

• WR Jalen Reagor: Reagor is the obvious No. 1 choice here, as he has done more harm than good in his second season in Philly after the Eagles selected him in the first round of the 2020 draft. Some receivers take a few years to mature and grow into productive players, but what is especially troubling about Reagor is that he had a disappointing rookie season, and then somehow regressed in Year 2.

• DT Fletcher Cox: While he has played hard more recently, Cox's disinterest was obvious at times this season. His decline as a player was expected, but not the degree with which it has accelerated this year.

• DE Ryan Kerrigan: The hope was that Kerrigan could give the Eagles' defensive line a late career Chris Long-like boost. Nope. Kerrigan has played 265 snaps this season; he has 3 tackles and no sacks.

• S K'Von Wallace: Wallace was expected to potentially compete for a starting job during training camp, at least until Rodney McLeod was ready to be a full go, but Wallace has fallen down the depth chart and hasn't played a snap in the regular defense since Week 8 in Detroit.

Question from Lipservice: Hi Jimmy. Why does everyone keep saying Hurts is being "evaluated?" There is nothing to evaluate when he was never a good passer or reader of defenses in college, with exceptional talent around him. Why would there be any reason to expect that to change now that he is in the NFL? Put differently, he was always projected to be a backup level QB; why does that need further analysis.

It's true that a major reason why the Eagles drafted Hurts was because, as Howie Roseman even said, Carson Wentz didn't often finish seasons, and they wanted someone capable of taking over in the event Wentz went down again.

And then during the 2021 offseason, it's also true that after they traded Wentz the Eagles did a hell of a lot of tire kicking on other quarterbacks, to put it mildly. So there's ample reason to believe that the Eagles still view Hurts as a backup-level quarterback as their ongoing evaluations continue.

Once the Eagles were unable to trade for a star veteran quarterback (Deshaun Watson, for example), they had no other choice than to roll with Hurts, who was afforded a one-year audition to show whether or not he could be a long-term answer, even if that opportunity came by default. Also, since he is, you know, THE STARTING QUARTERBACK in the most hardcore football city in the country, yeah, he's going to evaluated in the public arena as well.

Hurts has appealing traits, such as his running ability, leadership intangibles, etc. There is at least something to work with there, even if it was something of a longshot for him to become a top 10 type of quarterback to build around over the course of the next decade. Guys like Tom Brady, Russell Wilson, and Dak Prescott weren't thought to be long-term starters when they came out, but obviously, all three of them had some pretty appealing traits. Where would they be if their teams just said, "They're backups, and nothing they do is worth evaluating because they're just backups and that's that?"

In my opinion, there was reason to believe that Hurts could improve in some of his deficient areas, and he still can. He improved his accuracy throughout his college career, so there was some reason to believe he could do the same in the NFL, which in my opinion he has, but just not yet to the extent that would make him a viable NFL starting quarterback for a strong contender.

Will / should the Eagles find a different starting quarterback this offseason? In my opinion, yes, and yes. But that doesn't mean that you don't take a hard look at the guy's body of work before making the most informed decision possible.

Question from Matt: Let's say the Eagles stick with their three picks wherever they land at the end of the year. What are the chances they go with another WR? I assume they would do so with the last of the three since it'd be their third swing, but it seems possible that Garrett Wilson, Chris Olave, or another guy would be available there.

If they only had their usual one first-round pick, it would be pretty hard to justify taking a receiver in the first round for the third straight year. But if they have three? Sure, go nuts. I actually like Jameson Williams and Treylon Burks more than Wilson and Olave, but once again there's appealing talent at receiver high in the draft.

Question from greenwithenvy: Any chance the Eagles just cut Jalen Reagor in training camp next year?

Very unlikely. As we have seen, Roseman is slower to cut bait on missed draft picks than most NFL decision makers.

Question from Kimmy Jempski: Why mess up the Jordan Mailata - Landon Dickerson combo on the left side? Isn't it better to move Seumalo to RG and keep Kelce another year at center?

The Kelce situation is complicated, but if he retires that's out of the Eagles' control.

Question from Hinkie: In your mind, what is the worst thing the Eagles could do with their three first-round picks (or draft capital)? What is the best? What do you think they'll do?

Worst? Pick bad players. #Analysis. Or maybe wasting one on an expensive, declining vet, like a Matt Ryan or something.

Best? Turn some combination of those picks into a Top 10 quarterback for at least the next five years.

What do I think they'll do? I think they'll want to contend in 2022, and they're going to trade for a veteran quarterback, with Russell Wilson being the most likely option.

Question from Kephas: Seems unthinkable, but is there actually a scenario where the NFC East sends 3 teams to the playoffs?

Crazy, right? Because the Eagles, Football Team, and Cowboys play each other in varying combinations five times the rest of the season, it would take the right formula of wins and losses in those games for all three teams to get in. It would also require the 49ers and Vikings to fall apart down the stretch, which really isn't a stretch. So it's not crazy.

Of course, if it happened, there's also a decent chance that all three teams would be one-and-done in the first round.